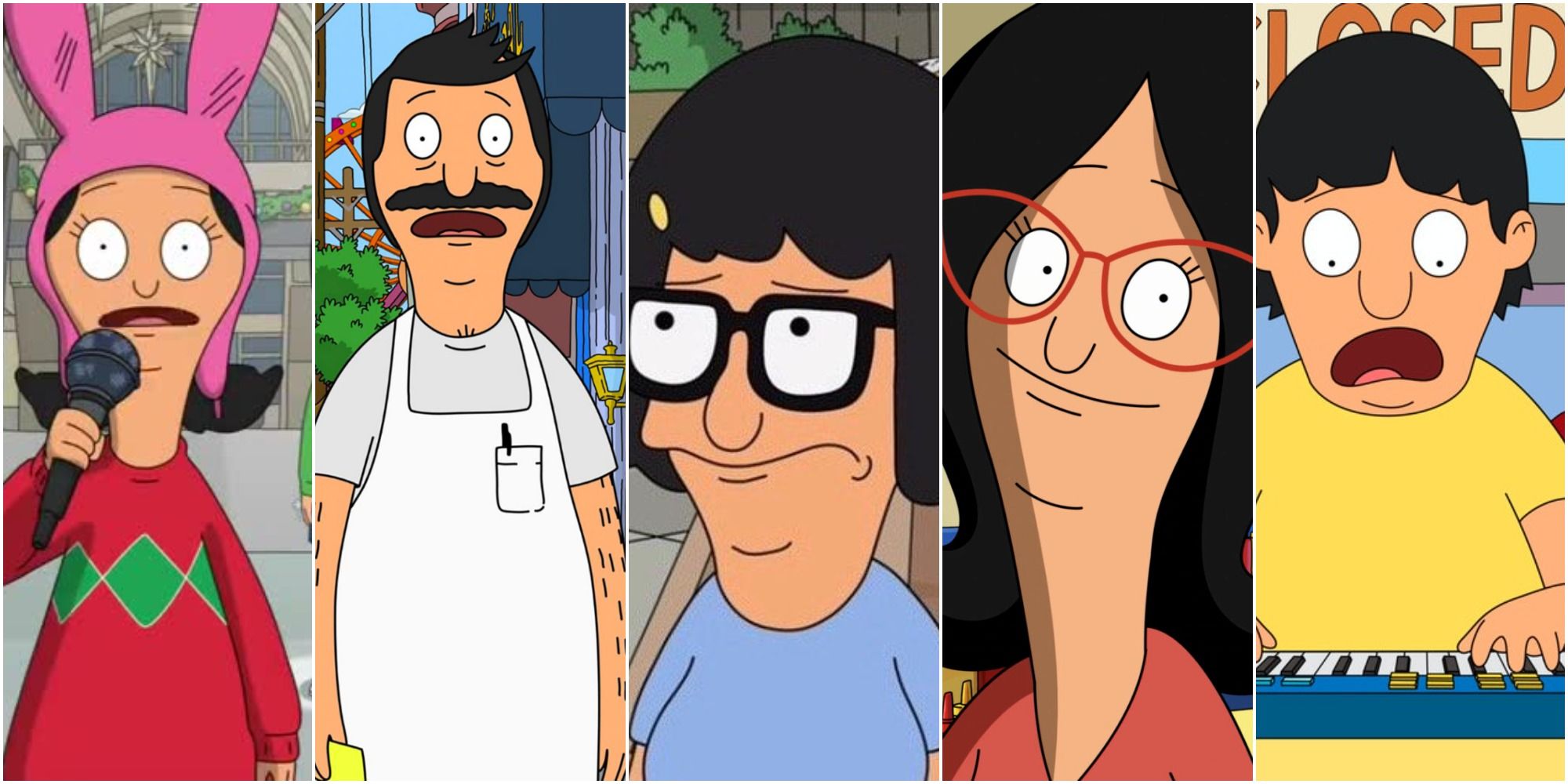 The Bob’s Burgers Film hits theaters on May 27, guaranteed to keep fans entertained and love newcomers to the series. Viewers’ favorite family, The Belchers, will save their restaurant from the brink of bankruptcy as usual, this time after a sinkhole forms at its main entrance.

RELATED: Everything You Need To Know About ‘The Bob’s Burgers Movie’

The feature films promise the same magic of the series: comedy, adventure, a really strange family made up of memorable characters, and lots of musical interludes that are as funny as they are strange. A quick review of some of the series’ best bits should put you in the mood for some extended Belcher fun.

Tina (Dan Mintz) is responsible for welcoming new girl Tammy (Jenny Slate) at school, but Tammy’s bad influence is immediately apparent when she states that the tour gives her a snort. Soon, Tina has a shitty attack for getting detention, but she’s so determined not to be a boob-punch, she follows Tammy down a bad girl rabbit hole.

The song Bad Girls is naturally associated with a montage of bad girls. Good girl Tina has ethical qualms when “bad girls don’t want to pay for lip balm” and starts wondering “are boys and their pretty butts really worth all that?”

COLLIDER VIDEO OF THE DAY

I have a Yum Yum from the “Carpe Museum”

For Bob (H. Jon Benjamin) first time as a parent volunteer, he takes the kids on a field trip to the local museum, where a docents’ strike leaves them woefully understaffed and utterly unprepared for Louise (Kristen Schal) particular mark of mischief. As Bob follows her and full-sized Rudy into the unopened wing of Amazon, Gene (Eugene Mirman) reluctantly gets a visit to the museum’s best boobs, and Tina and fellow freak Henry (Jim Gaffigan) try to establish which of them is the asshole.

Linda (John Roberts) begins to feel left out, so she attempts to join her family at the museum but unable to resist a good chant, ends up joining the picket line instead. Linda confidently leads the museum’s striking employees in several chants, including the infamous and inexplicable “Boys are from Mars, Girls are from Venus.” I have a yum-yum, you have a penis. Ridiculous Linda-isms never disappoint.

When the new science teacher bans volcanoes from the science fair, librarian Mr. Ambrose (Billy Eichner) inspires Louise with a little-known fact from Thomas Edison. It features a re-enactment of Edison’s public electrocution of an elephant named Topsy.

If the premise isn’t enticing enough, Brother Gene steals the show, improbably turning it into a love story between a man and an elephant. He and Tina act while Mr. Fischoeder (Kevin Kline) and Aunt Gayle (Megan Mullally) provide the voices. It’s nothing short of brilliant.

Gene is thrilled to finally put die hard: The Musical for the fall festival, but Courtney’s musician father (Jean-Michel Higgins) tramples on his dreams by staging A hard worker: The musical for his daughter to play instead. Not to be discouraged, Gene and Louise decide to put on their own guerrilla production, but Gene’s artistic vision leads him to fire his cast and stage it as a one-Gene show.

The two musicals go head-to-head simultaneously in an epic musical battle. This episode has something for everyone, especially after the musicals combine into an unforgettable mashup that finally gives Hans Gruber the happy ending he deserved.

Bad Things Happen in the Bathroom of “Glued, Where’s My Bob?”

Jump Morocco (Kumail Nanjiani) is hosting a profile for Bob’s Burgers magazine about hidden gems that could be very important to the restaurant. Unfortunately, Bob finds himself glued to the toilet when his panic poops intersect with the kids’ prank war.

RELATED:13 Essential ‘Bob’s Burgers’ Episodes To Watch Before The Movie

While Louise (the culprit) and Bob (the victim) are discussing their toilet problems, the journalist (Rob Huebel), the photograph (Key Keegan-Michael) and a stupid doctor (Ken Jeong) everyone crowds into the customers’ bathroom to survey Bob’s embarrassing situation and find nothing appetizing about it.

Gene sings Burgers And Fries outside the restaurant, allegedly to attract customers, with his sisters playing backup on straws. He recruits regular-sized Rudy on cymbals, Peter on electric recorder, and Darryl as the lead singer of Gene’s new band, Itty Bitty Ditty Committee.

When Gene is inevitably kicked out of his own band, he decides to quit music forever. First act of abandoning music: writing a song called I Don’t Need Music. But Gene can no more leave the music than the music can leave him. He may not be a musician, but he is muscular, and that was enough to Bob’s Burgers fans for 13+ seasons.

The fart song from “The Frond Files”

Genes writes a fictional essay in which he imagines himself to be a student at Fart School For The Gifted. Fart Fantasy Gene of course sings a legendary Fart Song, but his creativity fails to impress his teacher, and his parents are called in to have a chat with the guidance counselor, Mr. Frond.

Linda and Bob don’t find their children’s essays as offensive as their teachers. In fact, Linda exclaims, visibly moved by the lyrics of her son’s song, “All that air from your own behind, come on and set it free.” Because farts are freedom. It’s exactly the kind of soft-hearted toilet humor that audiences can expect from the best of Bob’s Burgers.

When the Belcher kids have an unfortunate incident involving a massage chair and a Santa at a mall, they worry they’ll end up on the naughty list and not get presents for Christmas. Naturally, they decide to put on an ice show to impress Santa at the mall, with a song they’ve written about all their good deeds, and the Jewish ice hockey team, The Mighty Schmucks, dancing to ice.

By the sixth season, fans of the show had certainly learned that while Belcher’s kids are adorable, they aren’t exactly selfless. Gene’s good deed for the year involves letting another kid grab the last taco (Gene secretly prefers nuggets anyway), and Tina’s involves a horseshoe crab that may or may not still have all of its legs. of origin. Luckily it’s the thought that counts. The holiday episodes are a great entry point into the series, showing the Belcher family at their best and their worst.

Twinkling lights from “The Bleakening”

In this two-part season eight holiday episode, a Christmas party at the restaurant leads to the theft of their mini Christmas tree and its special ornaments. The Belcher children think it must be the work of the Bleaken, an anti-Santa who steals gifts. Linda, however, knows the culprit must have been among their guests, and she is determined to work the case.

This leads the Belchers to a gay rave where a performance by drag queen Miss Triple X-mas (Todrick Hall) restores everyone’s holiday cheer. Gene says what the audience thinks: “Finally, a song about light bulbs!” Remember to stick to the credits, because fans are sure to want a second helping of this enlightening song.

Connor and Farrah had their first date at Bob’s Burgers, and just three months later, they’re back asking him to plan their beach wedding. Linda thinks it’s way too early to get married, but Bob is swept up in their romance.

At the wedding, Bob’s sweet side emerges as he sings beautifully about how his meat and buns contribute to someone’s special day. It is clearly an honor for him, even if his wife continues to be skeptical, and the marriage suffers a number of disturbing setbacks.

I Love You So Much (It’s Scary) from “The Hauntening”

In a classic Bob’s Burgers episode, the Belcher family sets out to frighten little Louise’s bejesus. With a little help from their friends, mission accomplished. The episode ends with a full Halloween-inspired clip from resident boy band, Boyz 4 Now.

Almost any Boyz 4 Now musical number makes a Bob’s Burgers even better episode. Boo boo (Max Greenfield) is the cutest and everyone’s favorite, but boys (and their butts) in general are Tina’s particular weakness. Call her boy crazy, but that girl has never felt so sane. Her monster crushes are a hallmark of the series.

NEXT: ‘The Bob’s Burgers’ Movie Review

Jay Carter Taylor (her) loves movies almost as much as she loves to hate movies. She haunted film festivals including SXSW, Berlin, Tribeca, TIFF, Fantasia, Venice and Sundance. She’s never missed a single premiere or series of MCU movies, even though Pixar and Wes Anderson are more her style. Jay supports female directors and ally JEDI. She has 1 spouse, 3 sisters, 4 dogs, 9 niblings and more jewelry than sense. She recently started playing Fortnite with her 8-year-old nephew.

Sign up to the Collider newsletter for exclusive news, features, streaming recommendations and more