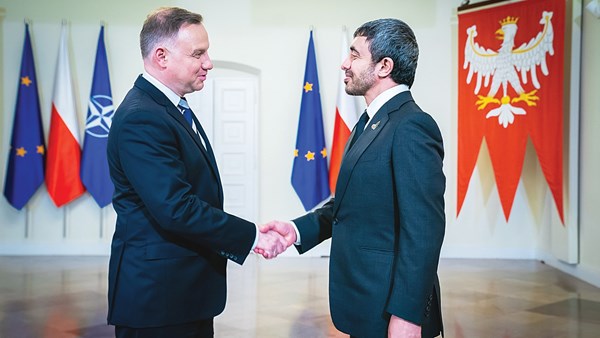 His Highness Sheikh Abdullah bin Zayed Al Nahyan stressed the concern of the United Arab Emirates, with the support and attention of its wise leaders, to strengthen joint cooperation with Poland in various fields in the light of the distinguished bilateral relations that unite the two countries. The meeting was attended by Dr. Iman Ahmed Al Salami, Ambassador of the United Arab Emirates to the Republic of Poland.
In addition, His Highness Sheikh Abdullah bin Zayed Al Nahyan, Minister for Foreign Affairs and International Cooperation, met in Warsaw with His Excellency Zbigniew Rau, Minister for Foreign Affairs of the Republic of Poland. The two sides discussed a number of regional and international issues. concerns, including the crisis in Ukraine and global efforts to achieve stability in energy markets. In his speech in the joint statement with His Excellency Zbigniew Rau, Minister of Foreign Affairs of Poland, His Highness Sheikh Abdullah bin Zayed Al Nahyan said: “The United Arab Emirates appreciates the exceptional relations and close ties that unite our two countries. , which include cooperation in various economic, political and cultural fields”, expressing his joy at being in the Republic of Poland, a country with a long history and a prominent presence on the international scene.

His Highness pointed out that Poland’s valuable participation in “Expo 2020 Dubai” is a current example of this joint cooperation and of Poland’s cultural and economic capabilities and its ability to innovate and create.
His Highness said: “During the current period when the world, led by Europe, is facing difficult and complex challenges, we appreciate the decisive role of Poland, especially in the face of international problems in terms of cooperation with neighboring countries to address the resulting humanitarian crisis of the conflict in Ukraine by hosting millions of refugees, with a warm welcome and expanding social safety nets to meet their needs.” We appreciate the vital role of Poland in facilitating the delivery of aid to Ukraine, including relief from my country,” he added. We are convinced of the need to intensify efforts to mitigate crises, including by allowing humanitarian aid to reach those in need unimpeded, and we also support Poland by expressing our concern about the high levels of hunger and food insecurity e in the world, which requires international efforts to meet these common challenges, which is one of my main priorities. His Highness Sheikh Abdullah bin Zayed Al Nahyan said: “We also welcome all the mediation efforts made by the international community to bring the points of view closer and promote stability and peace in Europe and in the world, as UAE, as a current member of the Security Council, looks forward to continuing to work with Member States, to resolve the conflict peacefully and through diplomatic means, in accordance with international law and the Charter of the United Nations.

His Highness indicated that our economic and commercial partnerships reflect the common objectives between our two countries. Last year, non-oil trade between the two countries grew to around $1.4 billion, a 10 percent increase from previous years. more than 37,000 Polish tourists, as well as the signing of new agreements aimed at developing and broadening the horizons of investment and economic cooperation. His Highness added, “We look forward to strengthening aspects of cooperation in all fields, especially renewable energy, health, education and technology, to achieve greater prosperity and stability for our peoples.” . At the end of his speech, His Highness Sheikh Abdullah bin Zayed Al Nahyan thanked His Excellency Zbigniew Rao for the warm welcome and the exchange of views on important issues, expressing his aspiration to meet His Excellency soon in the United Arab Emirates.
For his part, HE Zbigniew Rao welcomed the visit of His Highness Sheikh Abdullah bin Zayed Al Nahyan, stressing the importance of this visit in opening up many prospects for strengthening bilateral cooperation between the two parties in all fields. . He pointed out that the UAE and Poland enjoy distinguished bilateral relations and that there is a common interest of the two countries in developing cooperation prospects in various fields.
His Excellency extended his condolences to His Highness on the passing of the late Sheikh Khalifa bin Zayed Al Nahyan, may God have mercy on him. He also expressed his wishes to the UAE for continued progress, stability and prosperity under the wise leadership of His Highness. Sheikh Mohamed bin Zayed Al Nahyan, president of the state, “may God protect him”. His Excellency commended the UAE’s tremendous efforts to consolidate regional security and stability and maintain international peace and security, as well as its remarkable global humanitarian initiatives. The meeting was attended by Dr. Iman Ahmed Al Salami, Ambassador of the United Arab Emirates to the Republic of Poland.