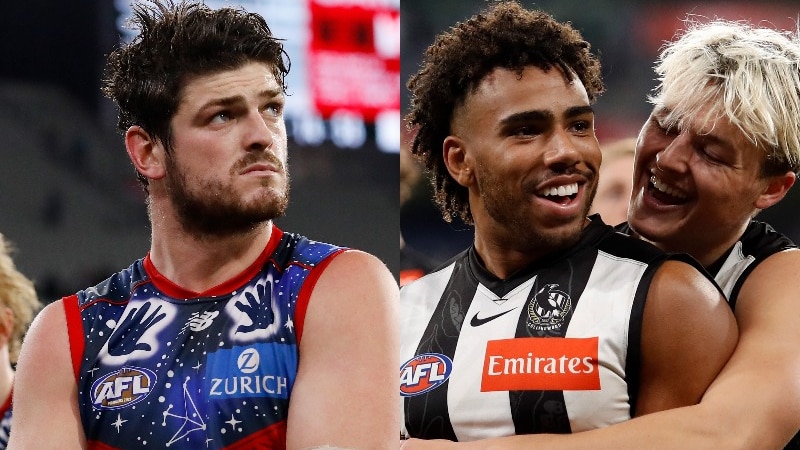 A Fremantle performance for the ages proves the demons are beatable, and the MCG is treated to a Collingwood-Carlton classic that could turn the tide for two juggernauts.

Welcome to the AFL Round-Up, where we digest the week that has been.

With a side step and a back paddle, Michael Frederick ignited the 2022 season on Saturday afternoon.

Frederick’s fearless energy and commitment to attack in a decisive third quarter personified the Fremantle onslaught, which ultimately brought the Demons to their knees.

Melbourne was always going to lose at some point. This loss alone does nothing to shake their blatant favoritism and will likely have little impact on the team’s confidence.

But the way that loss and the team it came against makes it a bigger moment than we perhaps could have anticipated.

Fremantle are the first serious contender Melbourne have played this season, and despite two bad weeks in the rain, the Dockers have consistently shown they have a game that should compare to the best.

It materialized in a remarkable way. Apart from a burst of the mark in the second quarter, the Dees could not penetrate the Freo defense. And when the Dockers put their offensive foot down, a stripped-back Steven May defense couldn’t cope.

In truth, it’s a game that means more to Fremantle than Melbourne. It was the best Freo football we’ve seen in the better part of a decade, another significant step forward for a young side that has established itself as one of the stories of the year.

And for the likes of Brisbane, Geelong, St Kilda and Carlton? They now know what is possible. It’s up for grabs now.

If you needed any further proof that we finally have a season on our hands, see arvo Sunday at the MCG.

Whatever your opinion on the future prospects of these two teams, a thriller on the wire in front of 80,000 spectators at the home of football was a welcome sight.

In truth, it would have been one hell of a robbery had the Blues snatched it in the end, as the Pies dominated for more than enough of the game to be worthy winners.

Carlton may have found his breaking point in terms of missing key players. No Marc Pittonet was OK, no Harry McKay about manageable, but no Jacob Weitering might be a bridge too far.

Without these key pillars, Collingwood dominated the air. But it was when the ball hit the ground, when pressure, commitment and intensity were the distinguishing factors, that the Pies really took control.

Now sitting on the sidelines of the finals, Collingwood will have early game regrets against Geelong and West Coast that they really shouldn’t have let slip.

But it’s all part of the journey of Craig McRae and the Pies, which, like Michael Voss and his Blues, is still in its infancy.

It just turns out that these two stories might be more closely aligned than we first thought.

A circular debate over a refereeing decision on the full-time mermaid sadly kept a Friday night match in the shadows. Sydney and Richmond look destined to play one hell of a playoff final come September.

Jeremy Cameron seems determined to make a difference for Geelong in 2022, and Chris Scott can feel it too. The Cats want Cameron in the game as much as possible, and even with some time in midfield, the goals still come.

It’s crazy how The West Coast may be in the midst of a historically bad season, plunging depths that not even the Suns or Giants rookie has reached, and the vibe at the club is always “eh, what you gonna do huh?”. Carry on then, I guess.

The Lions gave GWS a 20 minute lead and still managed to bring them back quite comfortably. Still, Lachie Neale was at the heart of it all – no one has a better season than 2020 medalist Brownlow.

The Suns are one win away from the top eight, and have North Melbourne and Adelaide coming either side of the goodbye. And unlike the last time they were in such a strong position, it’s not all on one bald man’s shoulder.

feels like Essendon would have been pretty much the happier of the two teams, despite losing to Port Adelaide in the rain on Sunday. Port have done just enough, but in an incredibly crowded season they are still a far cry from Finals quality.

At halfway through the season, St Kilda are in the top four. They have a week off now, before a trip to the Gabba to play in Brisbane. I already can’t wait for this one.

Here, we take stock of who’s leading the race for the season’s individual awards.

We stuck with Nic Martin as our rising star pick after last week, and he rewarded us this week.

While Jai Newcombe, Nick Daicos and co all had relatively quiet rounds, Martin defended the Bombers in their creditable loss to Port.

Todd Goldstein can claim brand of the week honors, largely because his gigantic leg actually got stuck on Mason Wood on the way down.

It was a tough field to separate for the goal of the week, but we’ll give it to Joel Jeffrey for his pivoting shot from the boundary line.

Of course he didn’t really mean it, but we overlooked the intention of keeping Ed Langdon leading for GOTY all year. And it will remain so.