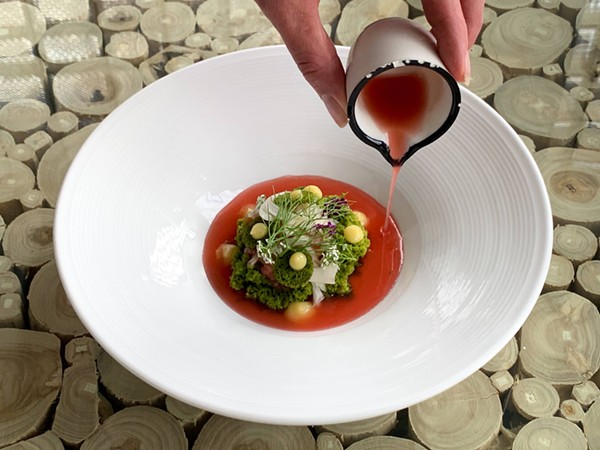 Among the many pitfalls of opening a second restaurant is failure to create a new identity. Some notable chefs and restaurateurs in Detroit and beyond opened second spots that felt like an extension of their first, which is OK, but it leaves a feeling of wanting.

Freya chef Doug Hewitt says he was aware of that challenge as he and restaurateur Sandy Levine developed their sophomore concept, and while some former Chartreuse employees are now at Freya, there’s a bit more. team approach, and there are a lot of new faces playing big roles, says Hewitt. Among these is Phoebe Zimmerman, Freya’s head chef, who arrived from Marrow and collaborates on many plates.

There’s also Ben Robinson, Freya’s baker and “pasta guy” who came over from Chartreuse but Hewitt says he has more room to put his spin on the restaurant’s identity, and does his thing at a home bakery. with a real bread oven. Robinson’s fine work greets diners as they are seated: sourdough bread with a rich, earthy mushroom pâté adorned with brightening pickled mustard seeds, red cabbage mostarda, green garlic and edible flowers. It is served alongside a small mound of vegetables grown by Drew Farm students at the Drew Transition Center in Detroit.

The play of textures of the dish, its bright palette and its perfectly contrasting flavors and counterpoints set the tone and are indicative of what lies ahead. Even when the plates of Hewitt, Zimmerman and Robison are busy, they are harmonious. Freya offers three menus, and a dining partner and I had the pescetarian and omnivore options, although there is also a vegan menu. It was $85 for each, and we chose wine pairing for an additional $50, 22% tip required, and spent an additional $50 on cocktails from the adjoining bar, Dragonfly – no duds in the mix.

Among the best Zimmrman-Hewitt collaborations is a plate of jumbo shrimp entwined with a lightly spiced lobster and tomato broth that is bursting with flavors of fried ginger and garlic, Freya shellfish and roasted tomatoes that were grown last year by Drew Farm then roasted and frozen. The savory side is balanced with a sweet poblano cornbread that contains the shrimp, and the package offers a real Creole vibe. Freya’s Heritage Pork Platter comes with premium prosciutto-wrapped pork medallions that are set amid nettle gnocchi and marinated mushrooms smothered in a slightly sour spruce tip cream, while a mustard breadcrumbs add flavor and crunch.

Hewitt treats his delicate scallops for just an hour in salt and sugar, then sears them lightly to get them just an inch beyond raw. The thin slices are arranged in a broth of electric green jalapeño and basil, and nestled among Szechuan pickles, fermented peppers, dill and other herbs. The omnivorous and pesecetrian menus each come with a more gravy-like “soup” with mashed white asparagus with potatoes and brown butter that supports a generous portion of chunk crab and lobster. The lentils offered a contrasting texture with green garlic, slivers of asparagus and edible flowers – a crowd pleaser.

Among the desserts, there was a pine nut panna cotta with a “vegan finger of butter”, lemon puree, fennel, tarragon and rhubarb jam, all assembled in a broth of rhubarb. Hewitt describes him as “the epitome of Ben Robinson”.

The reception staff is, in a word, attentive. There isn’t just one server per table – it seemed like we had interacted with all the staff by the time we left. The interior is clean, simple, and minimal with exposed gray brick, and early in the evening the room is filled with pleasant light that filters through the large glass brick windows. It manages to be intimate, and Hewitt said they were aiming for something “sexy without being weird” – that’s a good way to put it. The open kitchen is inviting, filled with wood and warmth, a departure from the sterile stainless steel and subway tile kitchens that are commonplace these days. Just like the dishes, the interior has a sense of the familiar, but evolving into something new and exciting.