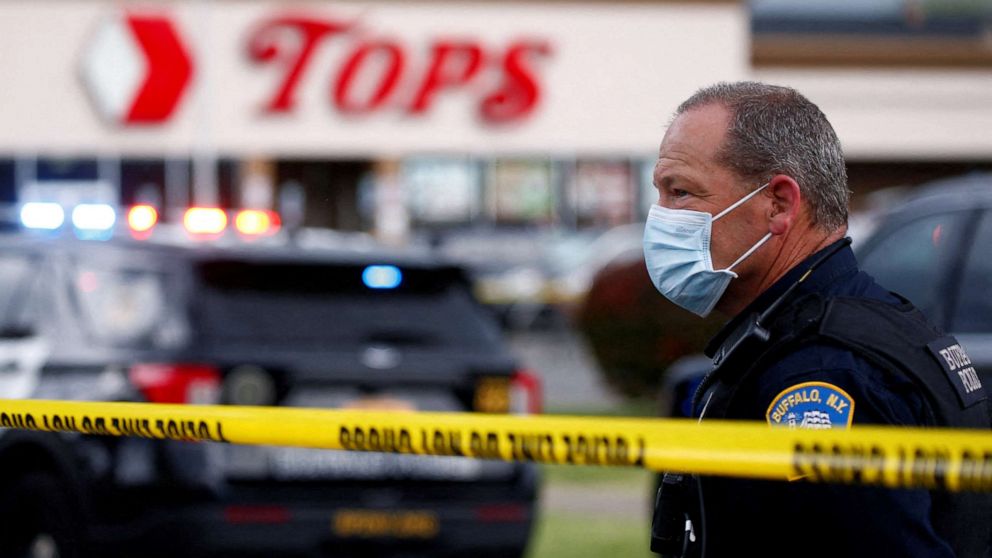 At least 10 people have died and three others injured after a mass shooting at a supermarket in Buffalo, New York, which authorities said was a “racially motivated hate crime”.

An 18-year-old white suspect is in custody, police said. The shooter broadcast the attack live on social media, authorities said.

The shooter, dressed in military fatigues, body armor and a tactical helmet, shot dead four people in the parking lot of a Tops supermarket around 2.30pm, three of them fatally. He went inside the store where he was confronted by a retired Buffalo police officer working security, police said.

The guard shot and punched the suspect, but to no effect because of the body armor, police said.

The shooter then shot nine other people inside the store, police said. He threatened to kill himself before dropping his gun and turning himself in to police, authorities said.

Of the 13 victims shot, 11 were African American and two were white, authorities said.

Four of the shooting victims were store employees, while the others were customers, authorities said. The Buffalo police officer who worked security was among those killed, according to a law enforcement official.

The scene is no longer active and no other suspects are outstanding, a law enforcement official said.

The gun was obtained legally but modified with illegal magazines, according to Governor Kathy Hochul.

“There’s no depth to the outrage I feel right now,” she said during a briefing on Saturday.

The suspect – identified as Payton Gendron of Conklin, New York – was arraigned on one count of first-degree murder and sentenced to being held without bail Saturday night, according to Erie County District Attorney John Flynn. His office is also investigating terrorism charges, he said.

The suspect traveled from a New York county several hours away to the store in Buffalo, authorities said.

“This is the worst nightmare a community can face,” Buffalo Mayor Byron Brown said during a Saturday press briefing.

The FBI is separately investigating the attack as a hate crime and as racially motivated violent extremism.

Investigators are reviewing several online posts that may be associated with the shooter, including praise for South Carolina church shooter Dylann Roof and New Zealand mosque shooter Brenton Tarrant, the sources say.

“It was pure evil,” Erie County Sheriff John Garcia told reporters. “This was a racially motivated hate crime committed by someone outside our community…entering our community and trying to inflict harm on us.”

Flynn said there is evidence that “points to some racial animosity,” but would not elaborate further at this stage of the investigation.

A home associated with the suspect in Conklin, a town near Binghamton in Broome County, was raided by the FBI and New York State Police on Saturday evening, according to law enforcement officials and witnesses. eyepieces. Hochul confirmed at a press conference that a home in Broome County was being searched on Saturday.

Authorities did not say which social media platform the suspect allegedly used to live-stream the shooting. But in the wake of the attack, video game streaming platform Twitch said it suspended a user indefinitely for the Buffalo shooting.

“Twitch has a zero-tolerance policy against violence of any kind and works quickly to respond to all incidents,” a Twitch spokesperson said in a statement. “The user has been indefinitely suspended from our service, and we are taking all appropriate action, including monitoring any account reposting this content.”

The company said it removed the stream within two minutes of the violence starting and was monitoring Twitch for any restreams of content or related content.

Erie County Executive Mark Poloncarz also tweeted on Saturday afternoon that he had been “notified of an active multi-shot event” at the supermarket.

“A horrible day in history [of] our community,” Poloncarz said in a statement. “Like too many communities in our country, we have been touched by the horror [of] a mass shooting. My thoughts are with the deceased and their families at this terrible time.”

President Joe Biden has been briefed on the shooting, his press secretary said.

“He will continue to receive updates throughout the evening and tomorrow as new information develops,” White House press secretary Karine Jean-Pierre said in a statement. . “The President and First Lady are praying for those who have been lost and for their loved ones.”

Attorney General Merrick Garland was also made aware of the incident.

Tops Friendly Markets said in a statement it was “shocked and saddened” by the shooting and offered its condolences to the victims and their families.

“We appreciate the prompt response from local law enforcement and are providing all available resources to assist authorities with the ongoing investigation,” the Amherst, New York-based supermarket chain said.

NAACP President Derrick Johnson said the organization was “broken” and “extremely angry” by the incident.

“It’s absolutely devastating. Our hearts are with the community and everyone affected by this terrible tragedy,” Johnson said. “Hate and racism have no place in America.”

This is a developing story. Please check for updates.