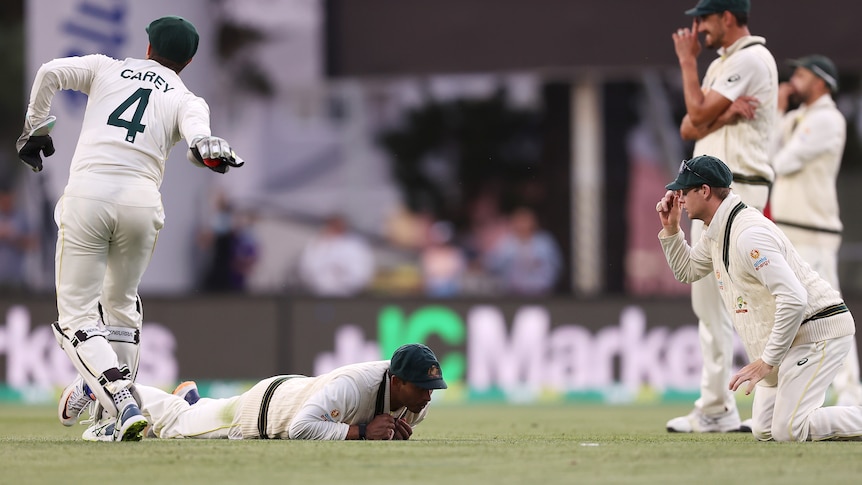 As the sun set over the River Derwent, casting shadows around the players at Bellerive Oval and helping to lubricate the revelers on the hill, it was hard to imagine the cricket test could get more perfect.

The merits of day-night testing are worth debating further, but there’s no doubt that during those brief evening hours, it makes the game a sight to behold.

Hobart residents have pledged to celebrate an occasion that some have declared the greatest in their state’s sporting history. The ashes came to town, and the town did them justice.

It’s a shame then that cricket itself has rather limped off to Tasmania. The second day of this fifth Test saw standards drop across the board as the toll of a condensed Ash series began to take hold.

It was not a disastrous day for the two teams. There have been no historic meltdowns or brutal beatings to be found.

Instead, everything was just a little off.

The first sign that the day was headed down an unorthodox path came when Stuart Broad was caught on the stump’s mic throwing frustrated demands at a remote control car about 100 yards away. You can rank ‘stop moving the robot’ alongside Marnus Labuschagne’s first-day dismissal on the list of things that wouldn’t make sense to a cricket watcher 25 years ago.

Meanwhile, England allowed Australia’s tail to work their way past 300, a result that would have been considered par for the course had it not included Nathan Lyon snagging Mark Wood in the parking lot.

Again, it was not so much the fact that England were knocked out in two sessions that disappointed, but the way the wickets fell. An opener was missed for a duck. Two batters were strangled in the side of the leg. So many players saw the good balls and then fell into the filth.

In and around it, Australia was everywhere.

The bowling was as good as ever – at this point you could be forgiven for thinking Pat Cummins and Scott Boland were the robots Broad had latched onto – but elsewhere there was a slack.

Twice the England batters appeared to send balls to Alex Carey, only for the Australians to offer muted calls and no criticism. It’s hard to know what to attribute that to, although it’s no exaggeration to suggest Australia fully locked out of the first three Tests would have been a little less hesitant on the trigger.

And then there were the dropped captures. They both came from Boland bowling and were painfully regulated, one blatantly.

TV commentary has focused on the drag cord placement, and rightly so. But no matter where the defenders were, they were always bizarre misses.

According to ABC statistician Ric Finlay, after the David Warner and Usman Khawaja spills, Australia had lost 13 strikes and England 17 in the series. That’s 30 dropped captures in less than five full tests, an alarming average that poorly reflects both sides.

The discomfort did not stop there. Warner closed out his streak with a pair, that night before Barmy’s army had even finished Jerusalem with a shot so loose it required a belt.

Labuschagne became another victim of the side leg gash, generally considered the softest of dismissals, and Steve Smith turned into an 11 with antics that, even for him, seemed a bit too much.

The irony of it all is that the match is now delicately balanced, perhaps because of the strong end-of-term vibe rather than in spite of it.

Australia leads by 152 runs with seven wickets in hand after two days. A good first hour on Sunday and England will be within easy reach of a first Test win in Australia for over a decade.

It’s also fair to recognize that players have every right to be a bit exhausted considering how compressed the series is and how many extra hoops they had to go through to get there.

But the schedule isn’t slowing down for Australia from here, and with major overseas tours on the horizon in 2022, it must be a little alarming how steep the drop can be.

Not that Australia is too worried. They earned that top position in the series and should be forgiven for a sloppy day as the nation’s sports fans are largely distracted by the tennis man.