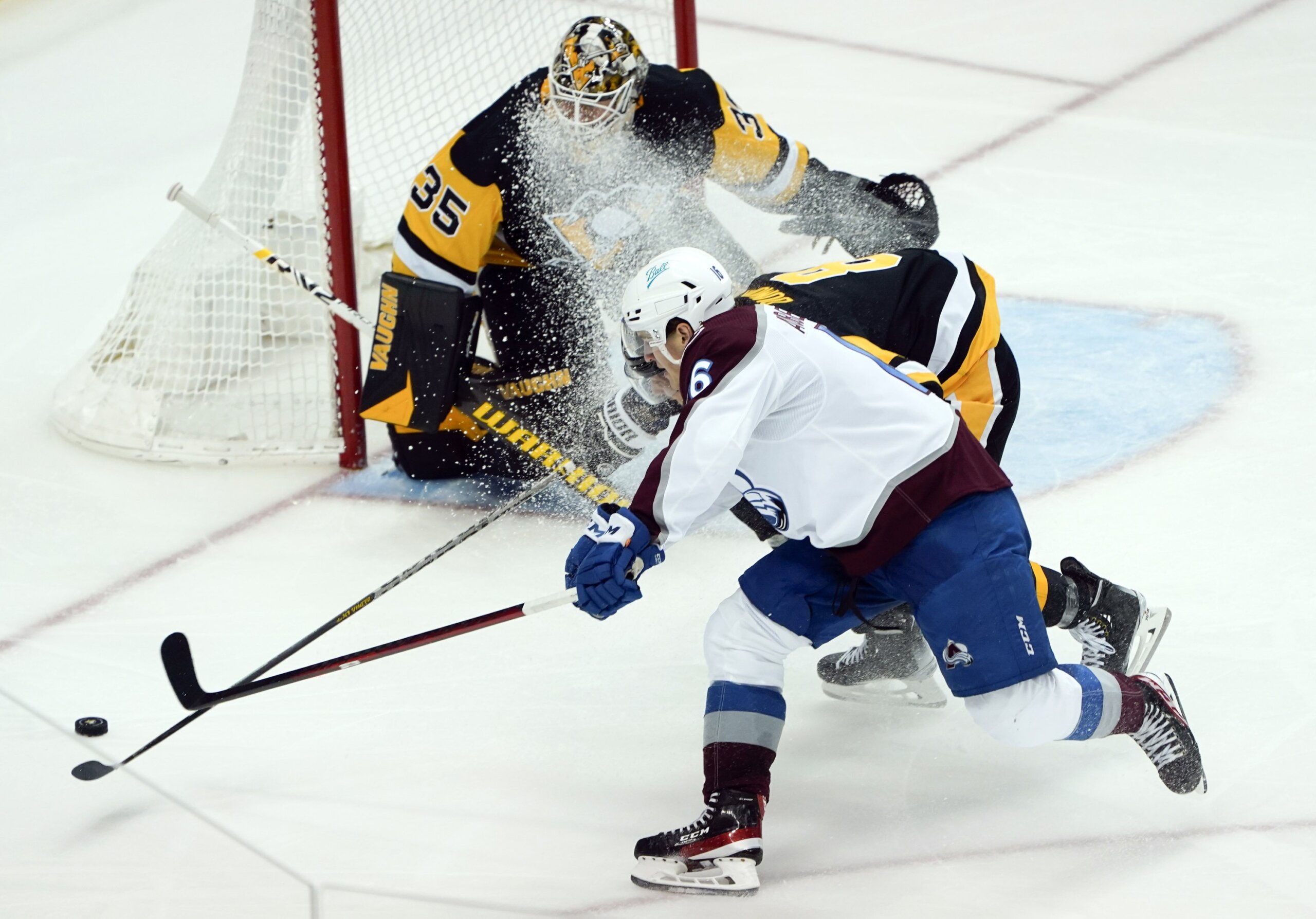 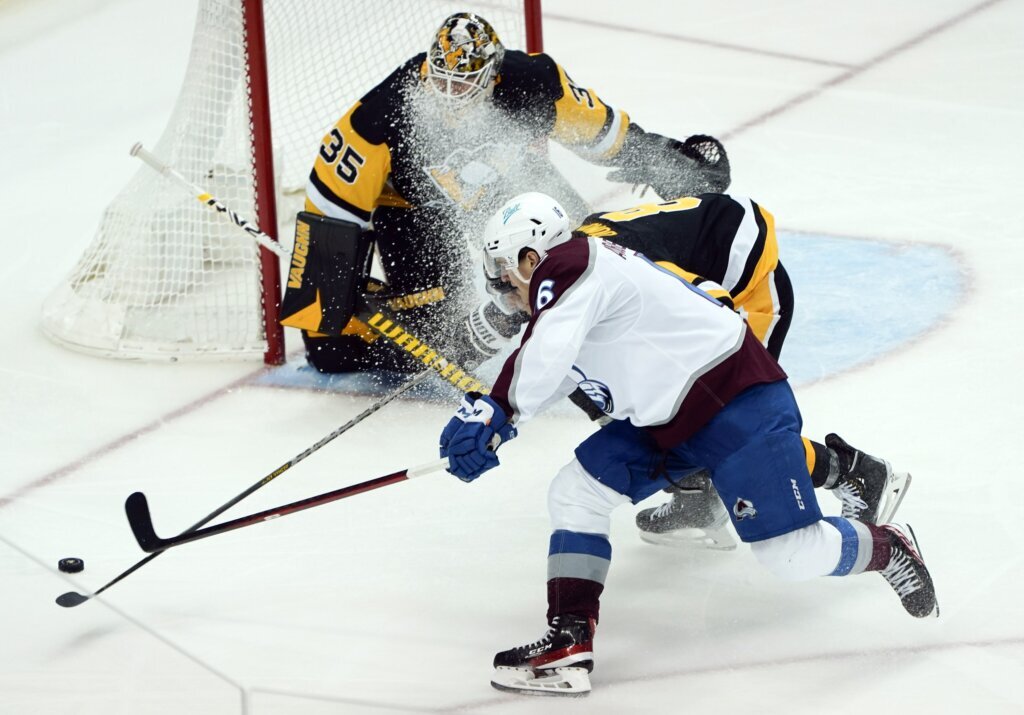 PITTSBURGH (AP) — The Colorado Avalanche clinched a playoff spot with the help of two goals from Nathan MacKinnon in a 6-4 win against the Pittsburgh Penguins on Tuesday night.

It’s the fifth straight playoff berth for the Avs, who also became the first NHL team to 50 wins this season and have ripped off nine wins in 11 games.

MacKinnon scored his 23rd and 24th of the season, while JT Compher got his 14th of the year. Darren Helm, Josh Manson and Artturi Lehkonen also scored. Darcy Kuemper won his 33rd game and stopped 41 shots.

Bryan Rust, Evan Rodrigues, Jake Guentzel and Mike Matheson all scored for the Penguins, but they lost for the second time in as many games against Colorado. The Avalanche beat Pittsburgh 3-2 in Denver on Saturday. Tristan Jarry made 26 saves for Pittsburgh, which has lost five of its last seven games.

Victor Olofsson had a goal and an assist in the third period to lead Buffalo past Carolina.

Jeff Skinner, Casey Mittelstadt and Dylan Cozens also scored for the Sabres, and Craig Anderson made 32 saves in the opening game of a home-and-home set with the Hurricanes.

Earning a point for the ninth time in 10 games (6-1-3), Buffalo held off being eliminated from the playoffs for an NHL-record 11th consecutive season.

The Atlantic Division-leading Panthers trailed 5-1 midway through the second period before roaring back.

Huberdeau took a pass from Barkov in overtime and poked it past Jack Campbell for his 102nd point this season. The Panthers improved to 49-15-6, setting a franchise record with their 104th point.

Erik Kallgren turned away 20 of 23 for Toronto before taking a puck off his mask late in the second. Campbell replaced him and stopped 22 shots.

Ryan Nugent-Hopkins tied it with a short-handed goal with 8:04 remaining in regulation before McDavid won it.

Mike Smith made a save early in overtime and sent the puck ahead for McDavid, who raced in on a breakaway and beat James Reimer for the winner. McDavid has 12 goals and 15 assists during his points streak. Smith made 31 saves for the Oilers.

Tomas Hertl scored a power-play goal in the first period but the Sharks were unable to hold onto the lead and lost their fourth straight. Reimer made 22 saves.

Roman Josi and Philip Tomasino had a goal and two assists, Matt Duchene had a goal and an assist and Juuse Saros made 47 saves for Nashville, winners of three of four as they try to keep pace in the tight Western Conference playoff race. Filip Forsberg had three assists and Mattias Ekholm added two.

Mats Zuccarello and Kirill Kaprizov each had a goal and an assist for Minnesota. Marc-Andre Fleury made 27 saves. The Wild were 9-0-1 in its previous 10 games.

Sean Kuraly added an empty-netter for Columbus in the final seconds. Brendan Gaunce and Carson Meyer also scored for the Blue Jackets.

Noah Cates and James van Riemsdyk had goals for the Flyers.

The Blue Jackets last won March 19 and let their playoff hopes all but disappear over the last three weeks.

Chris Kreider scored his 47th goal of the season, Justin Braun scored his first as a Ranger and Ryan Strome had a goal in his first game back from an injury.

New York improved to 5-1-1 in their last seven games. Alexandar Georgiev made 20 saves in winning his fifth straight start.

Anton Forsberg made 27 saves as the Sens downed the Habs for the first time this season.

Marian Studenic and Tyler Seguin also scored for the Stars, who moved into the Western Conference’s second wild-card spot. They’re a point ahead of Vegas and one point behind Nashville. Jake Oettinger made 19 saves.

Jean-Gabriel Pageau and Brock Nelson scored for the Islanders, who trail Washington by 11 points for the East’s final wild-card spot with 13 games to play. Semyon Varlamov stopped 37 shots on goal.

DETROIT (AP) — Jakub Vrána had a goal and an assist, Alex Nedeljkovic made a season-high 47 saves and had an assist, and Detroit defeated Boston.

The Bruins got goals from Erik Haula, Brandon Carlo and Patrice Bergeron, and Jeremy Swayman made 24 saves.