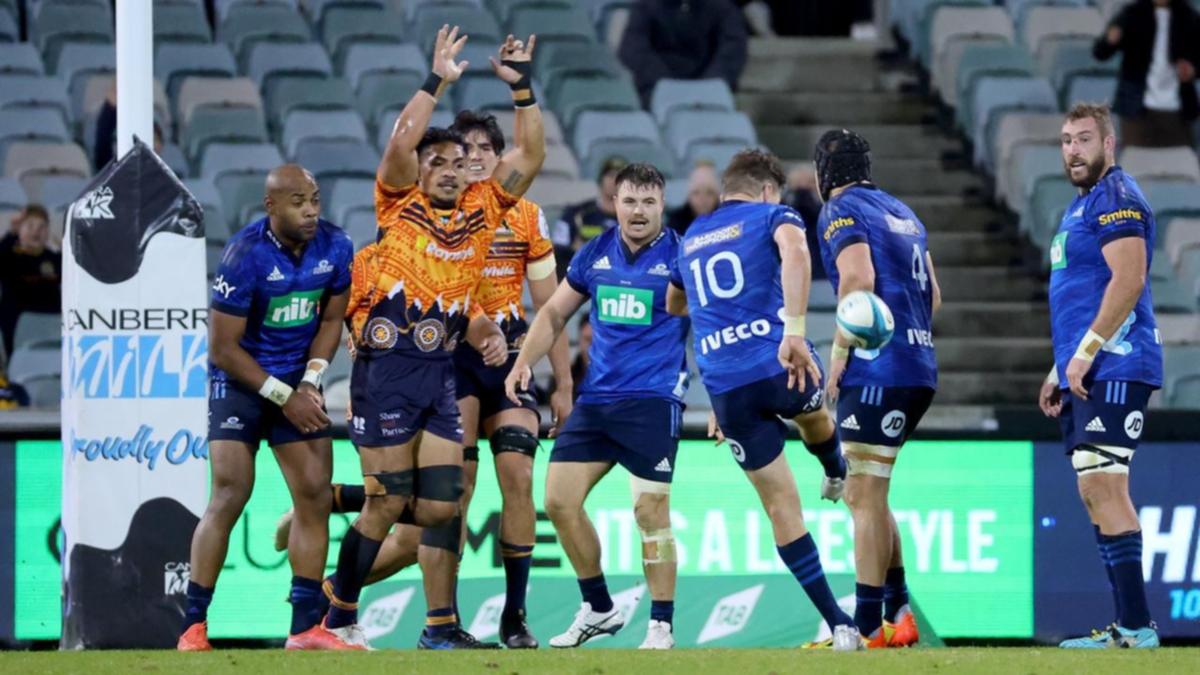 Beauden Barrett netted a basket after the Blues’ full-time siren to steal a famous Super Rugby Pacific victory over the Brumbies in Canberra.

The Blues’ 21-19 victory – a club-record 12th successive victory – propelled them further to the top of the ladder and virtually relegated the Brumbies to third place with one round to go.

The Brumbies took the lead with a try from Billy Pollard and clutch conversion from Noah Lolesio with 70 seconds left.

The Brumbies won the ball from the restart but lost possession and then watched the visitors work towards the posts, winning a penalty despite protests from the hosts before All Blacks playmaker Barrett used the advantage to nominate the winner.

The Brumbies were furious after a 16-5 penalty tally in favor of the Blues and at one point had made 95 tackles to the Blues’ 38.

The hosts, however, had fired out of the blocks and were leading 7-0 after Pete Samu found a patch of grass to plant the ball in the second minute.

But it’s all Blues after that, with the Auckland side exerting immense pressure as they threatened to fight back.

But it stayed that way for almost 40 minutes, Roger Tuivasa-Sheck, one of the Blues’ three potential goalscorers, held over the line.

Kurt Eklund thought he had broken the drought but was denied his try for a forward, with the move prompting a yellow card for Brumbies hooker Folau Fainga’a for repeated infringements.

Darcy Swain quickly followed to leave the Brumbies with just 13 players, but again they held on until Barrett came through for a scrimmage try after the half-time siren.

Brumbies half-back Nic White turned the tide after the break with a clean interception, running 80 yards before Fainga’a scored soon after from a maul to put the hosts in front.

Blues winger Caleb Clarke limped off with a hamstring injury and usually reliable Blues goalkeeper Stephen Perofeta then missed a penalty to go with a failed conversion earlier.

But they kept coming, Karl Tu’inukuafe coming with the ball in traffic near the line and popping up to put the Blues back in front with 14 minutes left.

Perofeta found his range with a penalty to make it a six-point game in the final five minutes.

Pollard scored his late try on a trademark Brumbies lineout and maul and Lolesio slipped his conversion inside the right post to set them up by one with 70 seconds left before the Blues pulled off their big breakout .