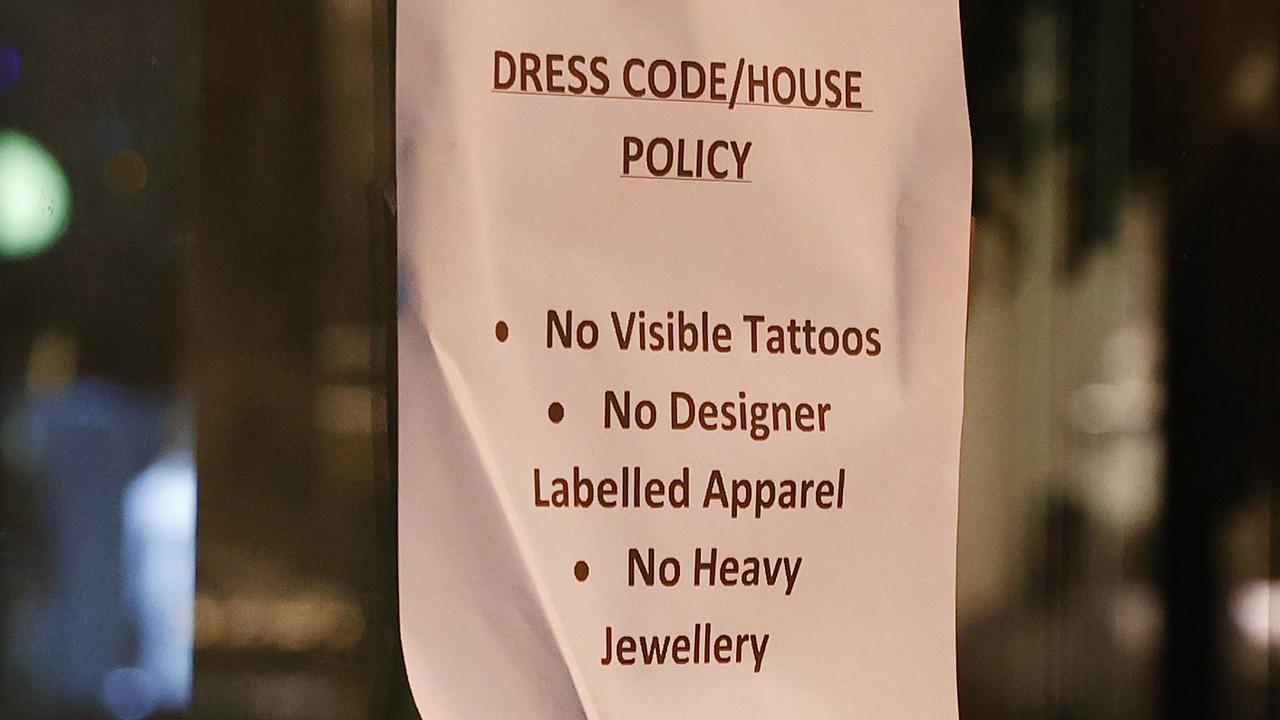 People with visible tattoos or designer label clothes have been banned from an up-market Sydney restaurant, as part of a bid to keep out “intimidating” customers.

An up-market restaurant and club in Sydney’s eastern suburbs has revealed it has a very strict dress code for customers, with some of the rules banning a large portion of the population.

If you have visible tattoos or like to wear a lot of jewelery then you can say goodbye to ever snagging a table at Bedouin restaurant in Double Bay.

The ritzy Middle Eastern restaurant posted a note on the front of its window outlining the venue’s “dress code/house policy”.

Under the strict rules, customers are not allowed to have any visible tattoos and they can’t wear “designer labeled apparel”.

Anyone wearing “heavy jewellery” will also be turned away, though it is unclear exactly how much bling tips the scale from appropriate to ban-worthy.

Bedouin co-licensee Poata Okeroa told The Daily Telegraph that the dress code was intended to keep out people with “intimidating appearances”.

“We value our customers and community stakeholders, and have always implemented house rules that includes a dress policy that discourages intimidating appearances,” he said.

News.com.au has reached out to Bedouin for further clarification around the dress code.

Since then the restaurant has exploded in popularity, with multiple celebrities being spotted at the venue, including tennis player Nick Kyrgios, singer Rita Ora, Thor director Taika Waititi and actor Scott Eastwood.

From 10pm-3pm on Fridays and Saturdays Bedouin transforms into a nightclub, with the venue also hosting a cabaret night on Sundays.

While there are many people who wouldn’t be impacted by the venue’s dress code, there are some that have been left less than impressed by the rules.

UK chef Michael Mcelroy, who currently works at a restaurant in Manly, told 7News he was shocked to hear about the rules surrounding tattoos.

“I’ve never heard of this policy in Australia, I have head and arm tattoos and not once when dining out has this come up until recently,” he said.

“Hearing they are now introducing these rules is a shame.”

Mr Mcelroy told the publication that his co-workers had told him bans around tattoos were common practice a few years ago.

“To hear we are going back to these rules is upsetting,” he said.

“I love to eat out at restaurants so sooner or later this will start to affect my dining experiences.”

Woollahra councilor Richard Shields was also gobsmacked by the rules, telling The Daily Telegraph that he thought it was an early April Fool’s Day joke.

“The listed restrictions would preclude a big chunk of the eastern suburbs,” he said.

“Regarding tattoos, I am personally not a fan — but I defend people’s rights to express themselves in that way.”

But not everyone is upset by the policy, with fellow Woollahra councilor Mary-Lou Jarvis telling the publication that it was up to the business to decide who they serve and who they don’t.

“It is a bit like vaccination – proprietors of businesses can choose the type of patronage they want,” she said, adding people can just dine somewhere else if they don’t like the dress code.

Restaurants enforcing dress codes isn’t unheard of, with an Italian backpacker making headlines just over a year ago for being asked to leave a Bondi restaurant because of her outfit.

Martina Corradi and her boyfriend were at North Bondi Fish when she claimed a staff member chastised her for her outfit, leaving her “embarrassed and offended”.

The restaurant copped backlash after Ms Corradi posted about her experience on a local Facebook group.

“The waitress as soon as I took a seat she said that I’m not well dressed and this is not acceptable to stay in a place like that,” she wrote.

“Me and my boyfriend we looked at her and we didn’t know what to say. We were shocked!”

She says the manager then came and told her the outfit was inappropriate.

The backpacker also posted a photo of her outfit, which consisted of white linen trousers, a bralette top and high heels.

The restaurant later issued an apology to Ms Corradi, saying staff had made an “error of judgment” and offering her a free meal.