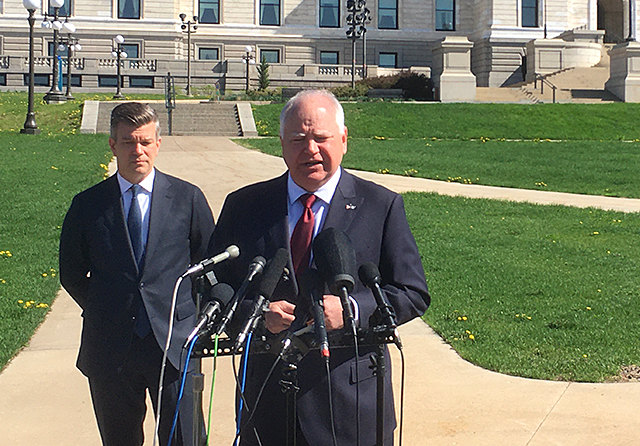 Minnesota Gov. Tim Walz projected himself as a seer on Monday as he outlined the deal he struck with legislative leaders on the budget and taxes.

“Two weeks ago I gave a state of the state address where I was absolutely confident that this leadership team could come together,” Walz said Monday in announcing the bipartisan agreement, which will split the state surplus not just for the current state budget, but for the budget two years after that.

Since the governor delivered his state of the state address, he and the leaders of the DFL House and the GOP Senate have struck deals to restore the pandemic-sapped unemployment insurance system; funded pandemic worker bonus checks; and expanded a reinsurance system that helps keep health insurance rates a little lower for individual and small group plans.

“We came up with a plan to take things off the table that needed to be taken off the table,” Walz said. “Then come back together and try to set a framework and then address those things.”

But unlike those previous agreements, the signed deal announced Monday by the gang of three — Walz, House Speaker Melissa Hortman and Senate Majority Leader Jeremy Miller — included few details, with the trio constantly returning to his assertion that it was a “framework” and that the various committee chairs would still work out the details.

And while the deal spans three years, earning it the nickname the three-year deal, the legislature this year can only approve a budget that runs until July 1, 2023. Standard practice is that no budget passed in one year can exceed what state economists believe will be available in the next two-year budget period, known as “the tail.”

The same robust economy that produced a $9.25 billion surplus for the remainder of this budget period is also expected to have over $6 billion more for the 24-month budget period that begins next summer. That leaves lawmakers and Walz free to pass new spending and tax cuts now that use both the current and projected surplus.

Let’s break it down by budget period:

All this is in addition to what has already been voted and signed: $891 million for reinsurance; $2.7 billion for unemployment insurance; $500 million for frontline worker bonuses; and $191 million in emergency funding for Walz to spend as needed for the COVID response. All of these expenditures come from the surplus, with the exception of $1.1 billion spent on the repayment of a federal unemployment insurance loan.

Under the higher numbers, the agreement calls for spending $1 billion on education over the next three years, $1 billion on health and social services; $450 million for public safety and the courts; $1.328 billion in all other spending areas; and a construction budget of $1.4 billion.

Yet the three leaders (House Majority Leader Ryan Winkler replaced Hortman, who is still in quarantine due to a positive COVID-19 test) insisted on Monday that there is no There were no additional orders from leaders — despite mentioning that spending for specific dollar amounts in other budget areas will be “as agreed by leaders.”

Part of that is a three-year hangover over criticism of Walz, Hortman and then-Senate Majority Leader Paul Gazelka, who made most of the decisions during the budget negotiations. 2019-2020. Sitting in the governor’s cabinet room, the “triumvirate” gave thumbs up or down on many details the committee chairs couldn’t agree on. Since then, the three leaders have said that grassroots presidents and lawmakers are more empowered.

“These decisions weren’t made as a triumvirate behind closed doors. We had to set some parameters,” Walz said. to see.”

At the same time, the three said there were no additional instructions for joint House-Senate bipartisan conference committees.

But some of these claims test credibility. In previous sessions, side deals were struck that were never made public as part of the signed deals. Walz and Miller on Monday frequently referenced their pre-deal priorities in Monday’s deal, though they said the details were up to the committee chairs.

On taxes, for example, Miller said his caucus is pushing for permanent tax relief. “We are very pleased that this agreement includes permanent and continued tax relief so that hard-working Minnesotans have more money in their pockets … especially at a time when Minnesotans are grappling with high rates. record inflation.”

Miller acknowledged there was a dollar amount specified in the agreement for pending tax rate cuts, but gave no specifics. “We know that’s going to be a big part of the tax relief,” Miller said.

Walz said the tax cuts will include immediate cash payments. It seemed close to the rebate checks he pushed despite the DFL House and the GOP Senate being cold to the idea. “Minnesotans need money in their pockets right now,” Walz said. “It makes sense to do that.”

But he also endorsed the long-term tax cuts without referring to the Senate GOP personal income tax rate cuts or the elimination of all Social Security taxes, even mentioning specifically. House DFL tax cuts targeted at low-income residents, parents with children and those with student loans.

It’s hard to imagine that the big three haven’t crafted a deal on tax cuts that will include all three priorities. But leaders have repeatedly asserted that it is up to the tax presidents of each house of the Legislative Assembly.

“There’s a framework in place, but there’s still a tremendous amount of work to do,” Miller said. “We encourage the members of the conference committee to get to work. My message to them is to focus on areas of agreement. There is not much time left before the end of the session.

The deadline is Sunday midnight.

Miller acknowledged that some form of triumvirate could reappear. “We need to give conference committees some time to work through the process. If they can’t make a decision, then maybe some of those decisions will come back to us at some point,” Miller said.

The same lack of detail plagued other areas of the agreement. Setting aside $1 billion over three years for public education now moves to a conference committee, which will try to reconcile a $30 million Senate bill and a more than $3 billion House bill. dollars.

And while the deal includes money dedicated to education, health and social services, everything else – housing, higher education, environment, public administration, trade and others – received $1.328 billion. . But these conference committees do not meet. When asked how much each region would spend of a fairly specific dollar amount, leaders hesitated.

Walz and the two leaders preferred to focus on the fact that there was a deal, rather than what that deal entailed. Walz said Hortman and Miller spent much of the session nurturing their political constituencies, but settled on a deal that may disappoint some of those constituencies. “What came together in a compromise serves a much larger group of constituencies,” Walz said. “It takes visionary and courageous leaders.”

Miller has to convince his caucus to agree to items they passionately disagree with and “Chair Hortman has to go back and try to round up some cats and whatever she’s doing there.”

Winkler admitted to an erroneous prediction he and Hortman made earlier in the session: that GOP leaders think the 2022 election will bring clear majorities and that it might be best to stall and wait until 2023.

“The question here in this budget year was whether we could do some work for Minnesotans and leave election year politics behind,” Winkler said, thanking Walz for pushing for a deal and Miller for agreeing to make a deal.

“We would have preferred to see more tax relief and less spending, but that’s part of the trade-off,” Miller said. “We believe the targeted investments that are included will have a significant impact on Minnesotans across the state.”