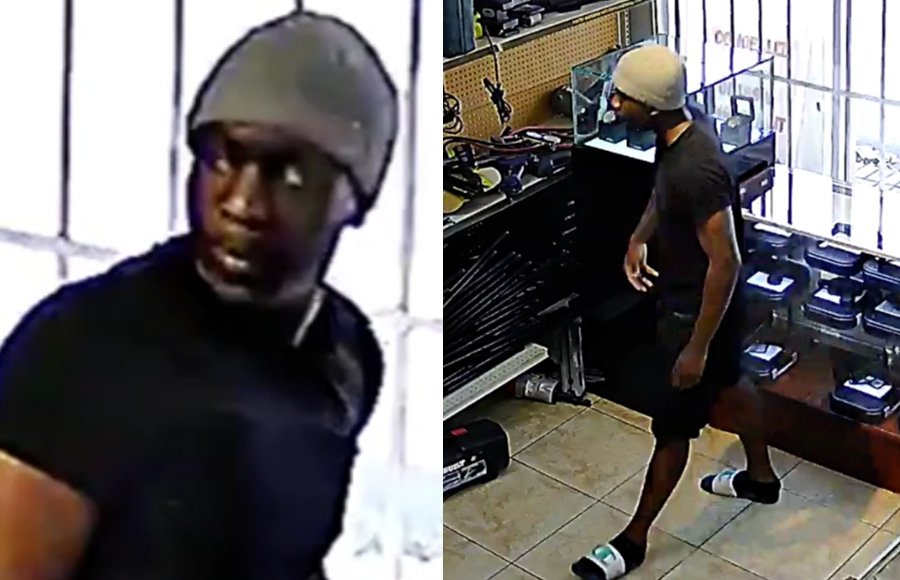 Authorities say around 1:20 p.m. on Wednesday, April 20, Broward Sheriff’s investigators responded to a delayed report of a burglary at a pawn shop near the 5000 block of North State Road 7 in North Lauderdale. On site, detectives learned that the day before, Tuesday April 19, while other customers were in the store, a subject stole two firearms and left.

The crime was captured on surveillance video which shows the subject, approximately 6ft tall, wearing a gray beanie, black shirt, black shorts and white flip flops entering the store. While employees were assisting other customers, subject walked to another area of ​​the store where he believed he could not be seen. The camera captures the moment he moved to the glass display case, picked up two guns and hid them in his shorts. Subject left the store in a vehicle, possibly a dark colored Dodge Avenger. The weapons were a Glock 43 and a Glock 30, with a total value of over a thousand dollars.

Broward Sheriff investigators are asking anyone with information about the subject’s identity or the circumstances surrounding this incident to contact Broward Crime Stoppers directly at 954-493-TIPS (8477), online at browardcrimestoppers.org, or call **TIPS (8477) from any cell phone in the United States. Remember that tipsters remain anonymous. Any information leading to an arrest, in this case, is eligible for a reward of up to $5,000.