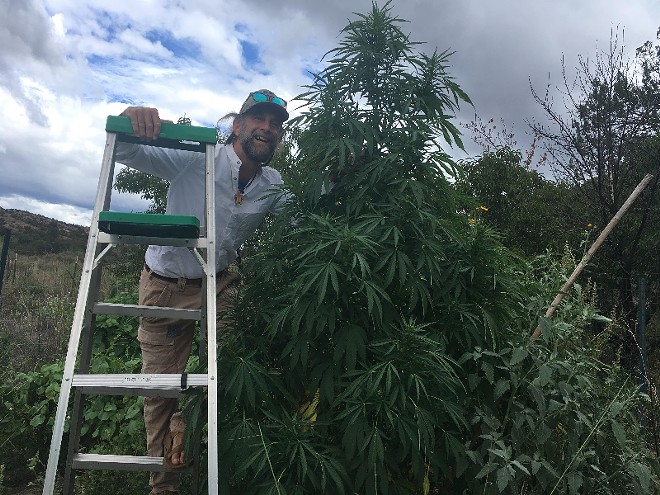 Hemp farmer Doug Fine uses regenerative methods in his work to ensure his soil does not suffer from degradation.

All of this is (almost) true. Indoor cannabis cultivation is not environmentally friendly. This method requires hours of blasting through air conditioning, heating (if you live in snowy areas), lighting, air filtration systems, and irrigation. Besides replacing high-voltage lights with LEDs, there are few green solutions for indoor growing to reduce their carbon footprint.

Outdoor cannabis grows aren’t perfect either. They have gained a bad reputation thanks to illegal operators who pollute national park lands, steal water from protected rivers and dump pesticides in watersheds. Even legal outdoor crops can contribute to soil erosion, nutrient loss and increased soil acidity. Monoculture, or the production of one type of crop to the exclusion of others, in cannabis is just as damaging to the soil as in traditional agriculture.

But the research highlighting the harms of cannabis cultivation lacks nuance. Why? Because growing cannabis can clean up the Earth and help fight climate change if done right. Regenerative agriculture, for example, is a system of farming practices that involves working with plants to use photosynthesis and maintain “living soil.” Plants extract carbon from the atmosphere and store it in healthy soil – grazed and naturally fertilized by animals – where it turns into stable carbon.

“The idea of ​​regenerative agriculture is simple,” says Leah Penniman, co-director and farm manager of Soul Fire Farm, in an interview with Now This News. “It’s that human beings don’t inherently need to trash the planet to eat. If you take from the soil, you also have to give back.”

Soil is a living organism impacted by humans and changing weather conditions. Research published in 2020 found that 16% of soils are believed to have a lifespan of less than 100 years due to human-induced soil erosion. Outdoor cannabis cultivation, like any agricultural product, could exacerbate the problem of soil degradation if the symbiosis between Earth, animals and humans is not at the heart of cultivation practices. Using the regenerative agriculture model to grow cannabis is how the plant is meant to be grown: connected to the Earth via living soil and surrounded by an orchestra of biodiversity. Hemp cultivation can be done in the same way.

“Regenerative farming of hemp and other beneficial crops has always been practiced, otherwise you and I wouldn’t be here,” says Doug Fine, best-selling author of American hemp grower and Farewell, my Subaru, who is also a regenerative polyculture farmer. “A growing body of research suggests that every cubic inch of topsoil we restore to the world’s farmlands sequesters up to three billion tons of carbon per year. We are all wise to support an industry that helps stabilize the climate.”

Hemp cultivation offers a two-pronged approach to combating climate change. First, simply growing hemp devours carbon at the rate of six tonnes per acre, according to the European Industrial Hemp Association. Hemp is more effective than trees at sequestering carbon, researchers say, because forests typically sequester 2-6 tonnes of carbon per year, while one hectare of hemp (equivalent to about 2.5 football) traps 8 to 15 tons of CO2 per year.

“We need to grow hemp at scale around the world to advance carbon reduction and Earth healthier,” says Stephan Smith, Founder and CEO of Onda Wellness, the first certified regenerative hemp farms biodynamic and verified, based in central Oregon. “This plant isn’t just about CBD oil; it can also help us clean up toxic soil so we can grow food that isn’t full of poison. Hemp has even been used to help clean up soil radioactive in Chernobyl because it is one of the best phytoremediators.”

Second, hemp has a plethora of practical applications – some claim there are over 10,000. The implementation of industrial hemp in society as a replacement for plastic and building materials, as well as the manufacture of paper products, paints, textiles, ropes and biofuel to power vehicles, could theoretically stop various levels of our pollution problems and prevent trees from being turned into paper. .

“In three to four months, you can make hemp paper,” says Roger Sterling, better known as Ganja Guru, who grows hemp on the family farm in Alabama. “Trees take a long time to grow, but hemp grows infinitely faster, and it does much of the same things as trees. Using hemp for paper would allow us to leave trees alone and have finally the same product or a better product in less time with more durable materials.”

The American hemp industry, however, is nascent. Hemp only became legal for American farmers in 2018 when the Farm Bill was amended to include hemp. Bob Escher, architect and president of Escher Design in Vermont and a founding member of the US Hemp Building Association, says hemp decortication plants – hemp processing facilities that separate the rugged, woody interior of the plant from hemp from the outside soft and fibrous – are rare in the United States. Yet the industrial hemp industry is slowly building.

“People came out of carpentry to develop the science to create hemp-based materials,” says Escher. “There’s a guy in Kentucky who builds hemp floors, so instead of mahogany or pine, it’s hemp lumber, which feels like hardwood. There’s also people who work on hemp plastics, so anything plastic can be replaced. Slowly but surely you’re going to see hemp-based materials being included in construction.”

There is a branch of Escher’s business called Hemp Hollow. It focuses on the use of hemp in architecture and its promotion as a certifiable building material. Hempcrete is one of Escher’s areas of expertise, and he says that’s a misnomer. It is not a one-to-one replacement for concrete. Instead, it is a lighter biocomposite material used for walls or insulation in homes or buildings. It’s not structural, so buildings and houses still require traditional frames and foundations. Using hempcrete, as well as other hemp materials in construction, could reduce CO2 emissions in the construction process and the overall energy consumption of a home or building.

“Hempcrete continues to absorb carbon even after a house or building is constructed,” says Escher, explaining that limestone powder is mixed with water, hemp chips (or the inner woody core of the hemp plant) and other additives to create hemp concrete. “Lime is the secret sauce because it binds hemp into a breathable material ideal for constructing buildings or houses.”

You see, there are myriad ways cannabis can help improve the environment. Hopefully, research into the environmental impacts of growing cannabis will reflect the nuances instead of further demonizing the plant, which could add a few hundred years to Earth’s lifespan.

“There is a lack of education and awareness about the impact hemp can have on the world,” Sterling says. “If everyone knew how drastically this could change things for us and for the environment, there would be no hesitation about whether hemp is a worthy industry. That’s why education about it is so important.”