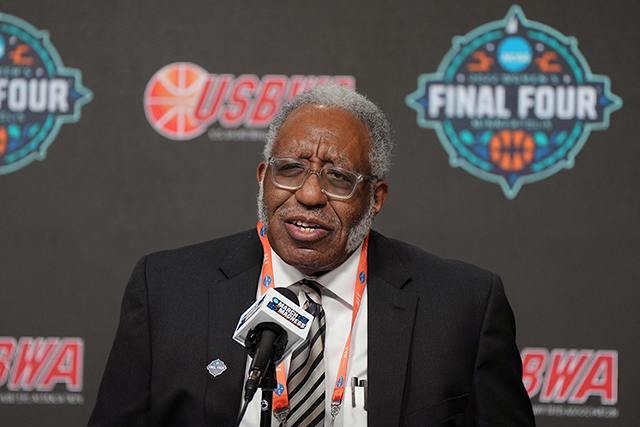 It’s rare to see Minnesota Spokesman-Recorder’s Charles Hallman in a suit and tie. There’s no need to dress down when you’re covering sports, as Hallman has done for MSR, Minnesota’s oldest black newspaper, since 1990. But one afternoon in early April, there was Hallman, all dressed and dapper as he entered the Target Center, completing the look with the beige trench coat that once belonged to his father, Charles Sr.

The opportunity? A ceremony at the NCAA Women’s Basketball Final Four, celebrating Hallman’s induction into the Basketball Writers Association of America (USBWA) Hall of Fame for her life covering women’s college basketball.

Hallman was the only one of the five inductees in the Class of 2022 not to be from a mainstream media publication, and the only one honored in Minneapolis; the others were celebrated at the Men’s Final Four in New Orleans. He is believed to be only the third black inductee overall, joining William Rhoden of The New York Times (now ESPN’s Andscape) and the late Brian Burwell of the St. Louis Post-Dispatch.

At the same time, Hallman, 67, also received the Mel Greenberg Media Award of the Women’s Basketball Coaches Association for her efforts to promote women’s and women’s basketball in Minnesota. Greenberg is a longtime Philadelphia-based women’s hoops writer known as “The Guru,” the founder of the Associated Press Top 25 Women’s Poll.

It capped a string of honors for Hallman, who has covered the women’s sports of Gopher and the Lynx longer than anyone. Several months earlier, the Tucker Center for Research on Girls & Women in Sport at the University of Minnesota had named Hallman to its Title IX Roll of Honor on the 50th anniversary of this landmark legislation. The Twins even gave him a jersey and asked him to throw a ball in a game on his birthday, April 28.

Never a self-promoter, Hallman isn’t comfortable with all that attention. “My oldest son (James) keeps trying to tell me to sit down and enjoy it,” said Hallman, from north Minneapolis. “He probably knows I don’t like it more than anyone. But now I’m getting used to it, not because I deserve it, but because I can’t live without it. I can’t hide it.

“I go to events now, no matter where I am, someone makes reference to me being a Hall of Famer. It’s something that I guess I’ve earned.

Hallman is perhaps one of the most fascinating people in the Twin Cities media. The grandson of a minister and husband of a retired pastor, journalism has been Hallman’s passion but never his full-time job. He made a mid-career shift to teaching and spent nearly 20 years in the St. Paul school system before retiring. He is also the longest-serving assistant basketball coach in the Minneapolis City Conference; he just completed his 27th season at Minneapolis South High School.

Besides his sports coverage, Hellman frequently writing on social issues and the arts for the spokesperson-recorder. Early in his career, Hallman developed a keen eye for identifying and speaking out against injustice, and he is particularly drawn to coverage of underserved services and under-mediatized bands.

He and the late Kwame McDonald fought a two-man campaign in MSR to have the University of Minnesota retire basketball star Linda Roberts’ number 21, an oversight. finally rectified in 2006, 25 years after he finished playing. Roberts, who is black, was a two-time Wade Trophy finalist as the nation’s best player and still holds the Gophers career record for rebounds. As Hallman noted, Lindsay Whalen only waited 10 months to see her No. 13 go to the Williams Arena rafters.

Jerry Freeman, editor of The Spokesperson-Recorder, compares Hallman’s approach to a ministry of journalism. “He’s a very spiritual and religious guy, and he’s very active in his church,” Freeman said. “What he does as a journalist is his service. He feels that in a very spiritual sense this is his mission, and he is very dedicated to it.

“He has a lot of energy and perseverance. He can write five or six stories a week. Pretty much anything we ask him to do, he’s on board.

A native of Detroit, Hallman grew up about a mile from Motown Records’ “Hitsville USA” headquarters. On his way home from school, he often ran into big Motown names like the Temptations and the Four Tops.

An only child, Hallman constantly listened to music and read anything he could get his hands on. Even today, Hallman’s mind is a storehouse of 1970s music and TV anecdotes. (Trust me: don’t challenge him on that.) He always wanted to be a journalist, a dream he said some of his professors at Michigan State didn’t exactly encourage. But his mother, Queen Ethel, now deceased, believed in him and supported his ambition.

“I never wanted to be a sportswriter, because I didn’t want to be typecast — here’s this big guy, he loves sports, so he wants to write sports,” Hallman said. “I deliberately learned to be versatile in all types of subjects that I could cover.

“I’ve covered every kind of beat you can imagine. I don’t like fashion shows. I don’t do that. I don’t like stuffed animals. I love investigations. I love write profiles and address issues that people don’t want to address.”

At Michigan State, Hallman became interested in women’s sports after meeting Spartan female basketball players during freshman orientation. “‘They said, ‘Come to our games,'” Hallman said. “I went there and enjoyed it. They were very good players. I just felt it was something that got overlooked in terms of media coverage. So he wrote about them for the student newspaper.

Years later, Hallman took the same approach with the University of Minnesota. As deputy news director at KMOJ-FM, he hosted a weekly show highlighting women’s sports. In the 1990s, former U women’s athletic director Chris Voelz remembers Hallman as the only non-student reporter to regularly cover women’s Gopher games.

“Charles was a gift to women’s athletics,” Voelz said in a phone interview from her home in Idaho. “There was someone from a newspaper or two popping up here and there. But Charles Hallman has always been there, at least for women’s basketball and volleyball. If it was a national championship that we were organizing, he was still there.

He does not compose his stories on a computer. He writes them by hand, on paper, before typing the final version on his laptop. “Typing slows me down in terms of the writing process,” Hallman said. “I keep Walgreens, Walmart, Office Depot and all those people in business, because I buy lots and lots of legal notepads and pens.”

He doesn’t own a car. He takes the bus everywhere and keeps a big packet of bus timetables in his work bag. “You sometimes meet interesting people on the bus,” he said. “It’s funny. I had a few story ideas while riding the bus.

He does not defend the national anthem. Most Twin Cities teams play the anthem about 10 minutes before a game starts, so Hallman usually stays in the press room until it is finished. “I became a Christian at 14,” Hallman said. “One of the ten commandments is to put no one above [God]. I look at the song and the flag as an idol, so I refuse to acknowledge it. When I learned that the song itself was written in a racist way, I had no intention of acknowledging it.