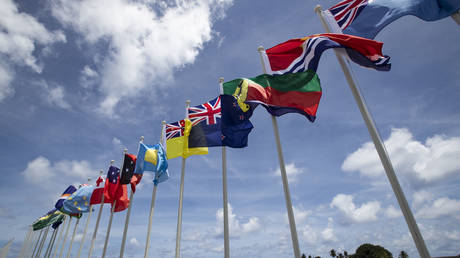 Samoa to cooperate with China on projects still ‘to be determined’

Chinese Foreign Minister Wang Yi concluded his visit to Samoa on Saturday, after holding a series of talks with senior officials on issues of “Mutual interest and concern”, and the signing of a bilateral economic and technical cooperation agreement.

“Samoa and the People’s Republic of China will continue to pursue greater collaboration that meets common interests and commitments,” Samoan authorities said in a statement on Saturday evening.

The Chinese delegation led by Wang Yi visited the Head of State, Afioga Tuimalealiifano Vaaletoa Sualauvi II, and Prime Minister Hon Fiame Naomi Mataafa, before signing at least three official documents – including one “Agreement on economic and technical cooperation for projects to be determined and mutually agreed between the respective countries.”

Few details emerged on the new deal, but the talks reportedly covered topics of “peace and security” in addition to issues such as climate change and the Covid-19 pandemic.

“Under the current circumstances of unilateralism and hegemonic bullying, China is willing to consolidate unity and cooperation with developing countries including Samoa, jointly safeguard the legitimate rights of developing countries, and insist on true multilateralism,” he added. Wang Yi said, according to the reading of the talks by the Foreign Ministry.

Wang’s trip follows the signing of a bilateral security pact with the Solomon Islands in April, which has come under heavy criticism from Australia and some of its Western allies. As part of the new diplomatic mission, the Chinese delegation has again visited the Solomons, as well as Kiribati and Samoa, and is now heading to Fiji.

Meanwhile, Fijian Prime Minister Frank Bainimarama held a “wonderful meeting” with Australia’s top diplomat Penny Wong, who has been sent on a rival charm offensive by the newly elected government in Canberra.

“Fiji is no one’s backyard – we are part of a Pacific family”, Bainimarama said on Twitter on Saturday.

Australia’s new Labor government is committed to “intensify” its own presence in the Pacific after making China a major campaign issue in the recent race. Penny Wong previously lambasted the Scott Morrison government for its weakness towards Beijing, saying the Solomons deal took place under its watch and created “the prospect of a Chinese base less than 2,000 kilometers off the Australian coast.”

Chinese officials have repeatedly denied any plans for a military base on the islands. However, Beijing seeks to offer “important” economic and security agreements with Pacific countries, according to a draft document leaked to the press this week.