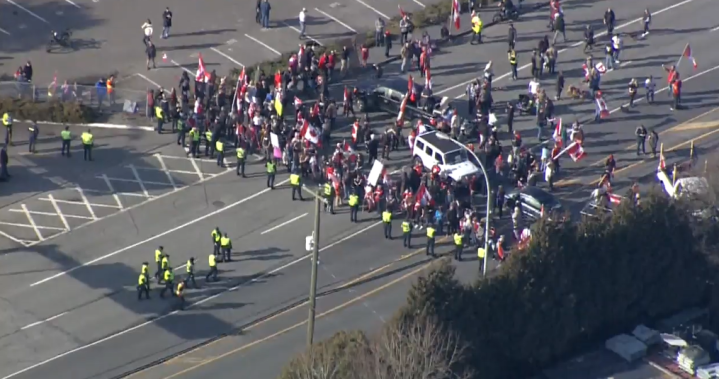 Protesters opposed to COVID-19 measures scheduled another vehicle convoy to the Pacific Highway border crossing in Surrey, BC, Saturday.

Demonstrators met in Chilliwack Saturday morning, then convoyed on Highway 1 with a destination of Highway 15 and 8th Avenue, the key entry point to the truck crossing.

Surrey RCMP said the border remained open and accessible to the public, but that officers would be conducting check stops and may divert non-local vehicles.

“Check stops are in place on all routes providing access to the Pacific Highway Border crossing,” RCMP said in a media release.

Meanwhile, a counter-protest by a group called “community over convoys” was scheduled at Renfrew and Hastings streets in Vancouver “to show the departing convoy they aren’t welcome.”

It will be the second time anti-vaccine mandate protesters have targeted the Pacific Highway crossing.

Saturday’s protests come as police in Ottawa continue to clear an entrenched demonstration that law enforcement and municipal, provincial and federal officials have all dubbed “unlawful.” More than 100 people have been arrested so far.

Earlier this week Prime Minister Justin Trudeau took the extraordinary step of invoking the never-before-used Emergencies Act, giving police and financial regulators exceptional powers to deal with the protest and blockades that have stretched across the country for weeks.

If MPs do not vote to approve the act on Monday, the emergency powers will expire.

1:42
Dozens arrested as police clearing the streets of Ottawa

Dozens arrested as police clearing the streets of Ottawa