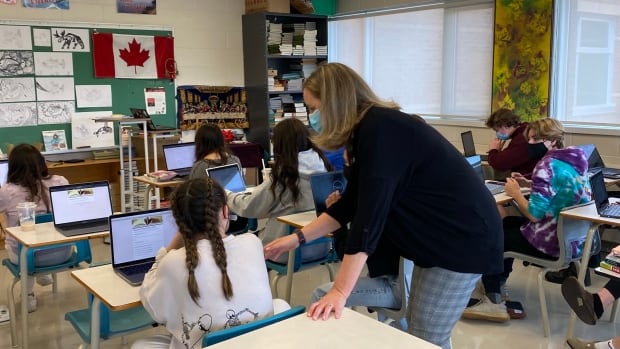 Ottawa’s largest school board says some classes have been closed due to ongoing staff shortages and unions blame the sixth wave of COVID-19, plus the built-up stress for education workers after two years of a pandemic.

The Ottawa-Carleton District School Board (OCDSB) reported 14 classes closed Tuesday and advocates say at least some of which are caused by the sixth wave of COVID-19.

Susan Gardner, local president of the Elementary Teachers Federation of Ontario, says she has heard some schools have more than a dozen teachers absent from class, resulting in a “bit of a scramble finding people to cover.”

“There’s a big problem, and so they’ve had to be really creative in either putting classes together or having students all together in a space,” she said.

Gardner acknowledged concerns about ventilation, but hopes that improves with oncoming warm weather.

The union for occasional, or supply teachers, calls the current situation in schools “chaotic” due to staff shortages, which extends to those usually called upon to fill in when full-time teachers are away.

Occasional teachers also remain hesitant to go into classrooms and further exacerbate the shortage, she said, because the “school is not a safe place for them.”

She said a lack of reporting, tracking and follow-up on COVID-19 cases alongside the absence of masks in schools means occasional teachers are “walking in blind to situations.”

Outside of the latest spread of COVID-19, which is keeping staff away from work and students from school, heightened levels of stress are persistent in schools, Gardner said.

Kristy Simons is a parent of two school-aged children and the administrator of an online Facebook page set up to track the situation inside school classrooms. She said the current tracking system for COVID-19 continues to fail parents.

The OCDSB said it does not have specific details on why staff may be absent, but wrote in a statement it could be due to “personal illness, taking care of an ill household member, or various other reasons.”

The board says the community was informed earlier this year that schools may be impacted by staffing shortages.

“We will make every effort to keep classes open, but if we cannot operate safely, a class may have to be asynchronous until we can arrange for appropriate coverage,” the OCDSB said.

“If this happens, we will make every effort to advise parents the night before. We encourage parents to have contingency plans in place and to monitor their email for updates from their school.”

Before considering a temporary closure of an in-person class, the OCDSB says it first ensures whether the classroom teacher is able to support students remotely before determining if it is better to re-assign a teacher or educational assistant, or move a class, instead of canceling the class.

The board added it continues to hire casual and occasional staff to increase the supply of available replacements.