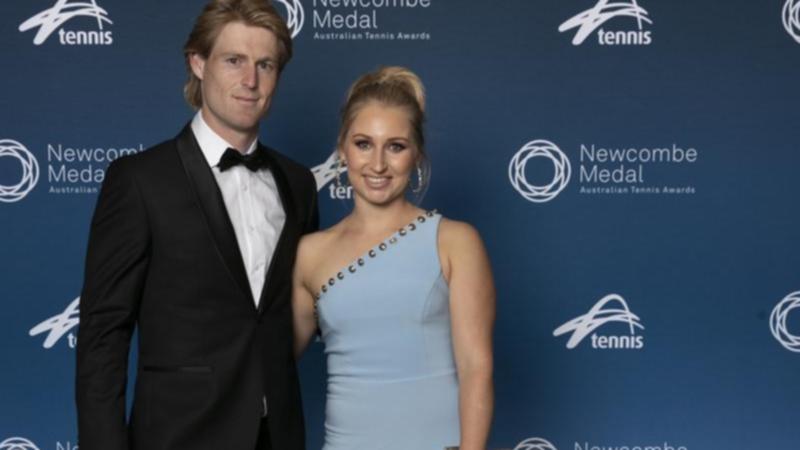 Even preparing for a landmark day in her own tennis renaissance, an anxious Daria Saville was distracted by news of her other half at Roland Garros.

“I was watching live scores from Luke’s game,” she explained.

“And I was thinking, it was going to be either a really good day for us or a really bad one!”

Well, it turned out to be a really good one.

Because after Luke Saville, playing alongside fellow Australian Jordan Thompson, won his first round in doubles, he headed to Court 7 to see his wife take the best win yet on his comeback moving singles, supporting her in her understated way.

It’s not often that their vastly different schedules allow for a luxury like this and ‘Dasha’ sounded like she really enjoyed seeing Luke at the edge of the pitch, pushing her to her surprisingly dominant win over Petra Kvitova.

“He’s not someone who’s going to be very loud, so that’s fine,” she smiled.

The Melbourne pair will be in action again on Friday, as Dasha takes center stage in their bid to reach the knockout stages of a Grand Slam for the first time in five years since reaching the fourth round of the Australian Open.

She takes on Martina Trevisan, an Italian friend she has known since they were young at a training camp in Livorno and played in an Under-14 event.

“Oh my god, the funniest thing,” enthused the flippant Saville.

“I think it’s going to be the same – long rallies, lots of shouting and ‘forzas, vamoses, allers, come ons!'”

They never met in competition as professionals, but happily practiced the other day, with Saville still blissfully unaware at this point that they were due to face each other in the third round.

Saville, poised to return to the top 100 after Kvitova’s win, predicts another ‘epic’ against left-hander Trevisan, who just won her first WTA tournament in Morocco to reach a career-high 59 – and it is the case seem hard to call.

Still, the Aussie thinks she’s definitely won in one area. Saville, who is 1.66m tall, often sighs that there aren’t many players shorter than her on the circuit, but about the Trevisan, who is 1.60m tall, she smiles: “I think I got it!”

A place in the round of 16 would be a huge feat for Saville, who at this time last year was still slowly recovering from Achilles tendon surgery in Melbourne, while Luke traveled the world on the doubles circuit .

They barely had a chance to see each other last year before their wedding in December, but playing mixed doubles together at the Australian Open helped kick Dasha’s comeback into the big time.

They had also hoped to play mixed doubles at Roland Garros but were unsuccessful.

Maybe that’s just as well, because wasn’t it supposed to be a recipe for divorce for a married couple to play mixed doubles together?

“Well, he served twice in that game in Australia – and we lost,” smiled Dasha, rolling her eyes.