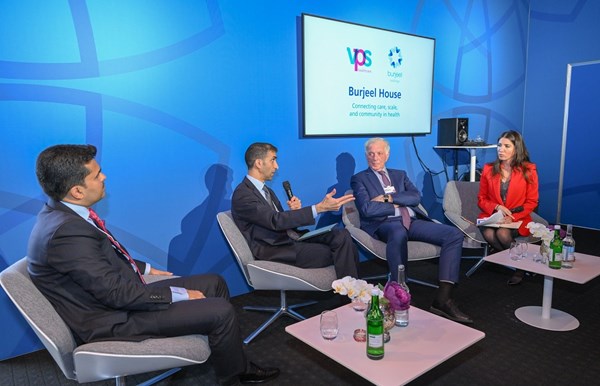 Davos, Dubai (Etihad)
The World Economic Forum, held in Davos, praised the UAE’s handling of the novel coronavirus (Covid-19) pandemic, stressing that the peace agreement signed between the UAE and Israel in 2020 offers a great opportunity to increase technical advancements in the medical field through cooperation between healthcare players in the region.
The forum hosted a session for a panel of officials and experts, titled “Abrahamic Accords: An Uncharted Path to Healthcare Innovation”, which was hosted by VPS Healthcare Group, at its Burjeel House pavilion in Davos, Swiss.
The meeting was attended by His Excellency Dr. Thani bin Ahmed Al Zeyoudi, Minister of State for Foreign Trade, Dr. Shamsheer Vayalil, President and CEO of VPS Healthcare Group, and Itamar Rabinovitch, former Israeli Ambassador to the States States, former President of the University of Tel-Aviv.
Al-Zyoudi pointed out that the exchange of knowledge between the two countries during the pandemic is the best example of bilateral cooperation.
He said: “There has been a medical exchange between the two countries during the pandemic, and research has been carried out on the virus and the vaccine, and the two countries have taken prompt action to deal with many developments, and we have seen tangible results which affect the control of the virus in the Emirates.”
He continued, “Bilateral trade volume between the UAE and Israel has increased to over US$2.5 billion in less than two years after the signing of the Abrahamic Accord.
The volume of transactions between the two countries exceeded one billion dollars in the first quarter of this year, and the two countries announced two years ago that they would allocate 3 billion dollars for research and development in order to increase their participation in the region.
Al Zeyoudi added, “The UAE is very keen to address and benefit from the strong health sector in Israel.”
Rabinovich noted the cooperation between the UAE and Israel in various fields, and said concrete steps must be taken to maintain the momentum between the two countries.
“The UAE has been involved in a very important project, which is the production of water and electricity in Jordan, and the UAE is playing an important role in this project,” he said.
He said: “The relationship has started well and is progressing towards the desired goals, and it is developing for the better with the continued leadership of both countries and their concern for the success of this distinguished relationship.”
Dr Shamsheer pointed out that the health care sector is one of the biggest beneficiaries of the Abrahamic Agreement between the UAE and Israel, and this agreement is fertile ground that has the capacity to affect the entire region. .
He said, “Health is one of the greatest bridges that can connect nations and peoples, and we have witnessed many bilateral moves between research companies and Israeli research institutes.
He added: “Great development can occur through certain research collaborations, and opportunities are increased due to the pool of capital in Abu Dhabi and the research talents of Israel, and as a healthcare company health, we are very happy to be part of this relationship.”
Shamsmir continued: “I remember the speech of His Highness Sheikh Mohamed bin Zayed Al Nahyan, President of the State, may God protect him, in which he insisted on not letting anyone living in the country suffer from a shortage of medicine or food. think it was a good start.”
He added: “We were all excited about this engagement, and we were all part of this battle against the Corona (Covid-19) pandemic, and the UAE has developed a new model of public-private partnership during epidemic, and he has the ability to move around the world.”
According to Dr Shamsheer, the Brahimi deal could lead to the next Nobel Prize for the region because of the close relationship between the two countries.