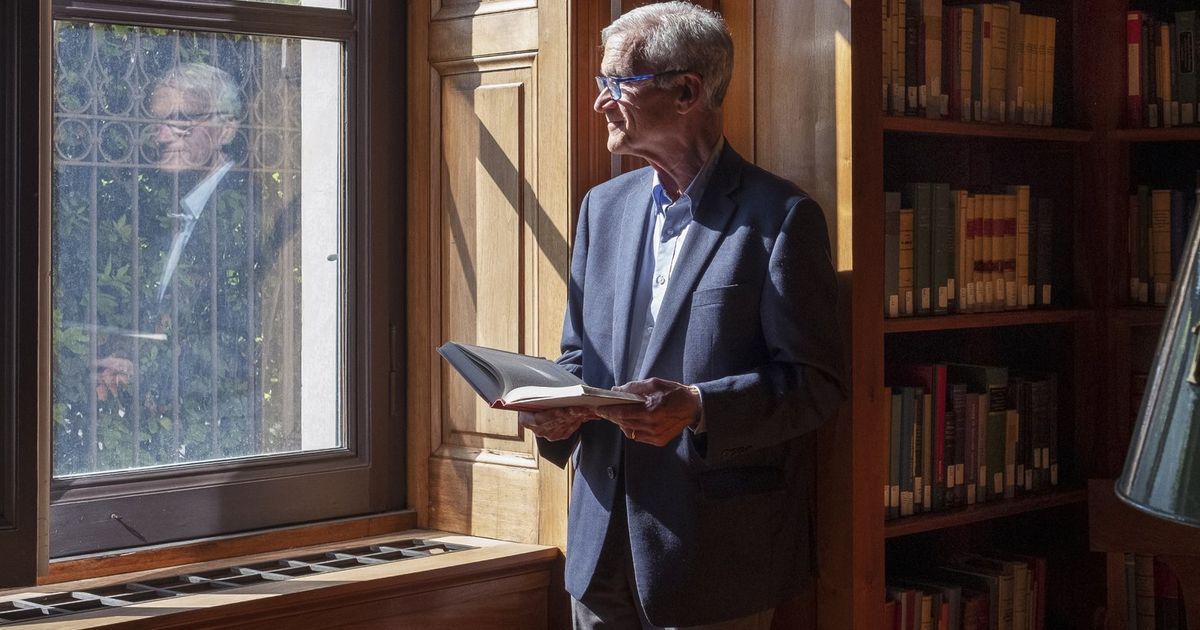 VATICAN CITY — David Kertzer put down his cappuccino, put on his backpack, and set off in search of more Vatican secrets.

“There’s a treasure hunt aspect to it,” said Kertzer, a 74-year-old historian.

Moments later, he walked through a crowd lined up to see Pope Francis, showed his credentials to the Swiss Guard and entered the archives of the former headquarters of the Holy Roman Inquisition.

Over the past few decades, Kertzer has turned the curious tables on the church. Using the Vatican’s own archives, the soft-spoken Brown University professor and administrator of the American Academy in Rome has become arguably the most effective excavator of the Vatican’s hidden sins, especially those that preceded and during World War II.

The son of a rabbi who participated in the liberation of Rome as an army chaplain, Kertzer grew up in a home that had taken in an adopted child whose family was murdered in Auschwitz. This family background and his university activism against the Vietnam War imbued him with a sense of moral outrage – tempered by scholarly caution.

The result are works that have won the Pulitzer Prize, captured the imagination of Steven Spielberg, and shined a sometimes harsh light on one of Earth’s darkest institutions.

Kertzer’s latest book, “The Pope at War,” examines the church’s role in World War II and the Holocaust – what he considers the formative event of his own life. It documents the private decision-making that led Pope Pius XII to remain essentially silent on Hitler’s genocide and argues that the pontiff’s impact on the war is understated — and not in a good way.

“Part of what I hope to accomplish,” Kertzer said, “is to show how important Pius XII was.”

The current pope, Francis, said, “The Church is not afraid of history,” when in 2019 he ordered the opening of the archives of Pius XII. But as Francis wrestles with how strongly to condemn a dictator, this time Vladimir Putin of Russia, Kertzer has unearthed chilling evidence about the cost of keeping silent about the massacres.

Kertzer argues that Pius XII’s overriding fear of communism, his belief that the Axis powers would win the war, and his desire to protect the interests of the Church all motivated him to avoid offending Adoph Hitler and Benito Mussolini, whose ambassadors had worked to put him on the throne. The pope also feared, according to the book, that opposing the Führer would alienate millions of German Catholics.

The book further reveals that a German prince and staunch Nazi acted as a secret conduit between Pius XII and Hitler and that the pope’s top Vatican adviser on Jewish matters urged him in a letter not to protest a fascist order to arrest and send to concentration camps. most of the Jews in Italy.

“It was mind-blowing,” Kertzer said of the letter.

Defenders of Pius XII, whose sainthood case is still being assessed, have long argued that he worked behind the scenes to help Jews and that anti-Catholic enemies sought to sully the institution by smearing the pontiff.

“A more open demonstration would not have saved a single Jew but would have killed many more,” wrote Michael Hesemann, who considers Pius XII a champion of the Jews, in response to evidence revealed by Kertzer, which he called “strongly biased”.

Hesemann, who is also the author of a new book on the pope in wartime based on the Vatican archives, argued that the Vatican, while following its tradition of neutrality, was working to hide Jews in convents and distribute false baptismal certificates.

Kertzer argues that the uncovered documents paint a more nuanced picture of Pius XII, showing him neither as the anti-Semitic monster often referred to as “Hitler’s pope” nor as a hero. But the urge to protect Pius’ reputation, according to Kertzer, reflects a more general refusal by Italy – and Vatican apologists – to accept their complicity in World War II, the Holocaust and the murder of the Jews of Rome.

On October 16, 1943, the Nazis rounded up more than 1,000 throughout the city, including hundreds in the Jewish ghetto, now a tourist attraction where crowds feast on Jewish-style artichokes near a church where Jews were once forced to attend conversion sermons. .

For two days the Germans detained the Jews in a military college near the Vatican, checking who was baptized or had Catholic wives.

“They didn’t mean to offend the pope,” Kertzer said. His book shows that Pius XII’s main aides only interceded with the German ambassador to free “non-Aryan Catholics.” About 250 were released. Over 1,000 were murdered at Auschwitz.

On a nearby street, Kertzer bent over one of the brass paving stones commemorating the victims. Above him stood the Tempio Maggiore, the Great Synagogue of Rome.

“I can’t think of this synagogue,” Kertzer said, “without thinking of my father.”

When the US Fifth Army arrived in Rome, Kertzer’s father, Lieutenant Morris Kertzer, a Canadian-born rabbi, was with them and officiated at the synagogue.

An American soldier, a Jew from Rome who had immigrated to America when Mussolini introduced Italian racial laws, asked Morris Kertzer if he could make an announcement to see if his mother had survived the war. The rabbi placed the soldier at his side, and when the services began, a cry erupted, and the GI’s mother rushed to hug her son.

“It’s the one I remember the most my dad told,” David Kertzer said.

A year before Kertzer was born in 1948, his parents took in a teenage Auschwitz survivor. When images of Nazi soldiers appeared on television, Kertzer and her older sister, Ruth, rushed to turn off the television to protect their adoptive sister, Eva.

By then, her father had become the director of interfaith affairs for the American Jewish Committee, essentially to try to rid the Christian churches of anti-Semitism. As part of the normalization effort, a young David Kertzer appeared on Jack Paar’s “Tonight Show,” singing prayers during the family’s Passover Seder.

At Brown University, his Vietnam War organization nearly got him expelled and landed him in a jail cell with Norman Mailer. He stayed in school and fell in love with anthropology and Susan Dana, a religion student from Maine.

To stay close to her, he went to Brandeis graduate school in 1969, where an anthropology professor suggested that his interest in politics and religion made Italy a rich area of ​​study.

The result was a year of research in Bologna, Italy, with Susan, now his wife, and his first book, “Comrades and Christians.” After earning his doctorate, positions at Bowdoin and Brown followed, as did two children, a lifelong connection to Italy and a growing familiarity with Italian archives – and then, coincidentally, those of the Vatican.

In the early 1990s, an Italian history teacher told him about Edgardo Mortara, a 6-year-old child of Jewish parents in Bologna. In 1858, the church inquisitor ordered the boy’s seizure because a Christian servant had possibly had him secretly baptized, and so he could not stay with a Jewish family.

The story represented what Kertzer called “a double career shift,” toward writing for mainstream audiences and about Jewish themes.

The result was his 1998 book, “The Kidnapping of Edgardo Mortara”, a National Book Award finalist in non-fiction. It caught the attention of his friend, playwright Tony Kushner, who then gave it to Steven Spielberg, who told Kertzer he wanted to make a movie out of it. Mark Rylance came on board to play Pie IX. Kushner wrote the screenplay. All they needed was a boy to play Edgardo.

Since then, the archivists of the Vatican recognize it and, sometimes, encourage it.

“Maybe they’re even happy that a stranger is able to bring this to light because maybe it’s embarrassing for some of them to do so,” he said.

After spending a recent morning in the archives, Kertzer emerged with a childish smile. He had just discovered that even during the German occupation of Rome, Pius XII was still primarily focused on the dangers of communism. The pope’s main cardinals advised him “to create a Catholic party. These are the origins of the Christian Democratic party,” Kertzer said, referring to the force that dominated Italy for decades to come.

“I doubt anyone has seen it before,” he said. “Well, outside of the Holy Office.”