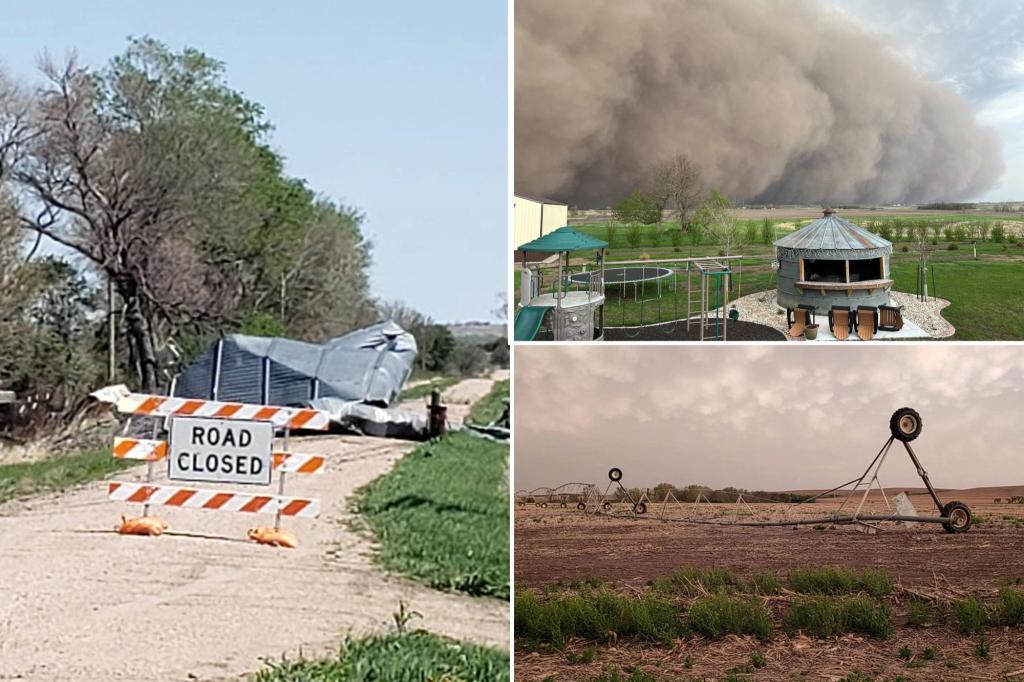 Straight-line winds of up to 105 miles per hour have reached Kansas all the way to Wisconsin, pushing waves of topsoil across the horizon and plunging communities into darkness, according to meteorologists and soil experts. .

The wall of dust conjured up images of the Dust Bowl of the 1930s, the farmers said, with winds knocking storage buildings over tractors and flipping cars on highways.

“The damage is extensive, but it could have been much worse,” said Todd Heitkamp, ​​lead meteorologist at the National Weather Service in Sioux Falls, South Dakota. The most severe damage affected parts of Nebraska, South Dakota, Iowa and Minnesota, he said.

As the winds died down, a grainy layer of black soil coated wind turbine blades and filled drainage ditches, farmers said, as rich topsoil, crucial for crop growth, blew over some fields.

According to Joanna Pope, public affairs officer for the state of Nebraska for the U.S. Department of Agriculture’s Natural Resources Conservation Service, dry conditions in the Great Plains and Midwest, combined with traditional farming practices such as tillage, set the stage for the massive dust storm.

“The best defense against this type of thing is to plant cover crops and soil conservation practices like no-till,” she said.

“The soil that is exposed dries out very quickly and high winds just blow it away. It’s people’s livelihood, blowing. It’s awful.”

The storm could add to the difficulties as farmers face delays in planting, soaring input costs and pressure to increase production amid record food prices and fears of shortages.

Farmer Randy Loomis was planting corn near Ayrshire, Iowa when the storm rolled in, throwing a neighbor’s grain silo into his yard.

His wife and daughter, after dropping off supper, abandoned their car to huddle against the wind in a nearby ditch, he said.

“That big cloud of dust was three football fields wide,” Loomis, 62, said. “It was just black. …he had sucked up all that black dirt.