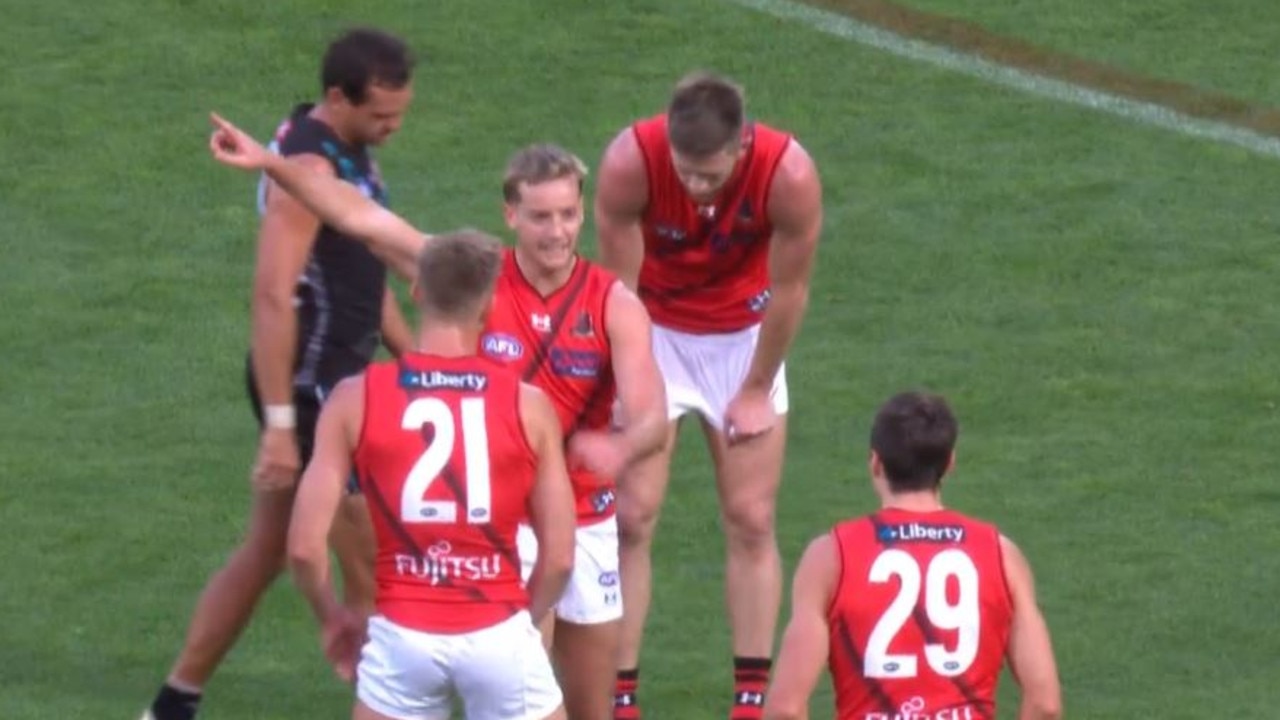 Opinions were divided, but one AFL great certainly didn’t like watching Bombers star Darcy Parish explode at his captain mid-game.

AFL commentators were divided on Sunday after watching Essendon star Darcy Parish explode against his own side in a narrow loss to Port Adelaide.

The Bombers were down 20 points in the quarter after hitting just six behinds and a clearly upset Parish could be seen protesting with his teammates as captain Dyson Heppell tried to calm him down.

Watch every AFL blockbuster game this weekend live and ad-free on Kayo. New to Kayo? Try free for 14 days >

Former AFL star Ben Dixon was not a fan of Parish letting his emotions boil over.

“I hate it. I hate…the fact that Darcy Parish is blowing up, he’s trying to give instructions,” Dixon told Fox Footy’s. First crack.

“The captain is trying to talk to him…he walks away. Do not do that.

“I don’t mind talking on the football pitch and working on it, but Dyson always talks. He just went ‘Nup, don’t listen’.

“Just sit there and work it out. because if you don’t solve it, it will bubble up for the rest of the game.

“If it blows up about (the team organization), just sit down and work it out.”

“The crux of the discussion is the confusion over who had who and I think that’s been the issue all year since Essendon,” King said.

“It was following a kick. Parish thought Heppell had a man he didn’t.

“He didn’t have that responsibility, hence the confusion. They don’t know who they’re up against for most minutes of the game.

“Great teams do that – deal with issues in the game. That’s what good teams do, you don’t wait until Monday for the review,” he told Fox Footy.

“I love Parish’s passion. It shows he cares.

“He is frustrated – I understand.

“As long as everyone can handle it…I think these situations are normal for teams.”

Meanwhile, Port Adelaide’s rescue mission is back on track after Power won a furious third-quarter rally by Essendon to score a hard-fought 16-point win.

After a disastrous 0-5 start to the season and last week’s disappointing loss to Geelong, Power enter mid-season with a 5-6 record and plenty of reason to be optimistic after the 9 win, 12 (66) to 6.14 (50). at Adelaide Oval.

Ken Hinkley’s men led by no less than 38 points in a dry first half, but the Bombers took advantage of wet conditions after the break to reduce Port’s advantage to just eight points by the end of the third quarter.

With steely determination required, Hinkley’s charges didn’t let him down, grinding down a determined last term where neither side managed a goal.

“To get to this point after we left, I’m pretty proud of how we managed to get back into the competition,” Hinkley said.

“We’re in it strongly now and at least we gave ourselves a chance (in the final) in the second half of the season.”

The result condemns the Bombers to a 2-9 record with some soul-searching required as they also enter their bye.

Ollie Wines, Connor Rozee and Travis Boak helped drive Port’s charge in the first half and got their hands dirty in the second when conditions called for it.

The Power welcomed offensive pivot Charlie Dixon for his first game of the season and he was the only multiple goalie on the ground with two.

Parish racked up the eliminations again, finishing with a game-high 39, with Zach Merrett, Nick Hind and Nic Martin also important to the visitors.

“There was a bit of optimism at half time due to the way we were competing and the way the game was being played, it was just our inability to make the most of our opportunities,” said Essendon coach Ben Rutten.

“I think that was the difference in the first half and then I felt the way our guys adapted to the conditions and played the third quarter in particular was a real step forward. for us.”

Originally published as ‘I hate it’: Essendon star tears up after exploding at team-mates, colliding with captain