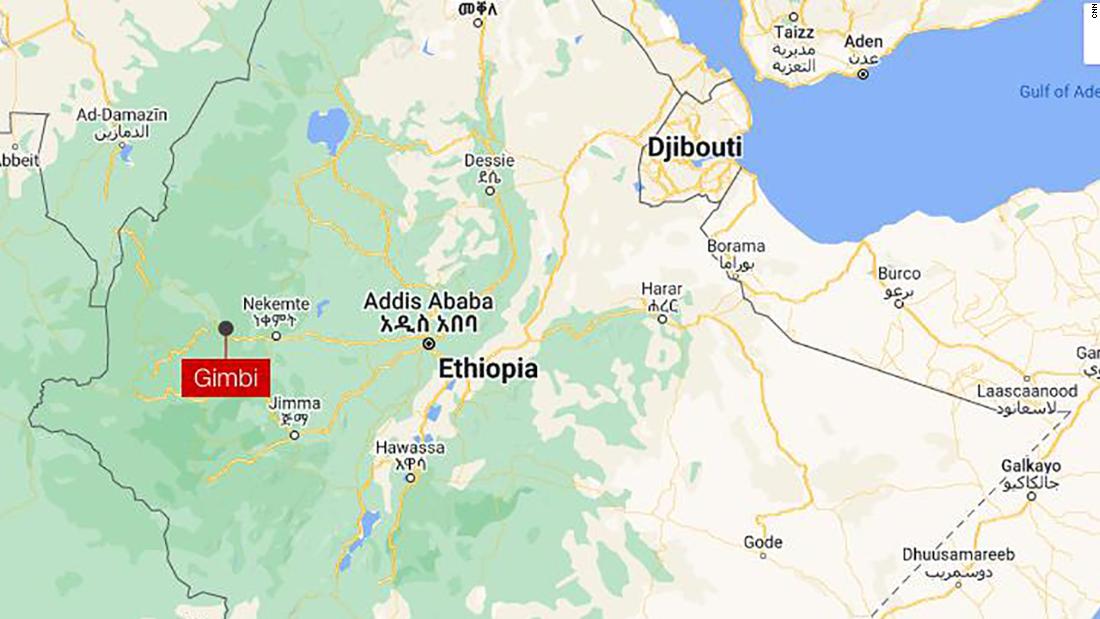 The attack on the town of Gimbi was linked to fighting between government forces and the OLA, according to a statement from the Ethiopian Human Rights Commission (EHRC). The EHRC told CNN on Monday that the assault left “dozens of people injured, villages destroyed and entire communities traumatized.”

The OLA – which last year aligned itself with Tigrayan rebel forces against the Ethiopian federal government in the country’s protracted conflict – has denied all the allegations. OLA spokesman Odaa Tarbii said on Sunday that Prime Minister Abiy Ahmed’s “regime” is “again accusing the OLA of atrocities committed by its own retreating fighters.”

The rebel group has been designated a terrorist organization by the Ethiopian government, and it is frequently accused of attacking civilians and targeting ethnic Amharas.

The incident is one of the worst atrocities to hit the country since fighting broke out in Ethiopia’s northern Tigray region in 2020, when Abiy’s government and its allies in the neighboring Amhara region attempted suppress a rebellion of the Tigray People’s Liberation Front (TPLF).

The ensuing civil war has seen both sides commit atrocities, according to human rights groups, and risks dividing the ethnically diverse country. There is no suggestion that the TPLF was involved in Saturday’s attack.

A local police officer involved in the response effort to Saturday’s incident told CNN that an attack occurred near Tole, a village in Gimbi on Saturday, with the majority of the victims belonging to the Amhara ethnic group. . The policeman spoke on condition of anonymity as he was not authorized to speak on the case.

The attack came days after fierce fighting between government security forces and the OLA in the area, he said.

Survivors and escapees told the police officer that the attack began when OLA members attempted to drive through the village but were denied passage by local residents and armed civilians.

A resident of Tole, who spoke only on condition of anonymity for fear of reprisals, said he saw OLA militiamen marching on a main road on Saturday morning before dispersing to nearby villages. Government forces, which were seen in Tole earlier in the week, had left the area days before the attack, he added.

The police officer said responders were dispatched to the scene on Sunday to collect and bury the bodies.

Federal forces have now secured the area, he added, but “residents are still asking for immediate assistance due to security concerns in the area,” the EHRC said.

The Oromia regional government has also accused the OLA of attacking civilians after “it was unable to resist attacks by security forces” and pledged to step up attacks on the group, according to a statement released on Sunday.

Prime Minister Abiy said “attacks on innocent civilians and destruction of livelihoods by unlawful and irregular forces are unacceptable,” in a tweet on Monday.

EHRC chief Daniel Bekele urged the authorities to “ensure the necessary measures for the protection of civilians” and “find a lasting solution to the problem”, in a statement from the commission on Sunday.

Ethiopia is an ethnically and religiously diverse nation of approximately 110 million people who speak many different languages. Its two largest ethnic groups, the Oromo and the Amhara, make up more than 60% of the population. The Tigrayans, the third largest, make up about 7%.

Last week, Abiy said the Ethiopian government had formed a committee to negotiate with forces in the Tigray region. This event marks an important step towards peace negotiations between the two parties.