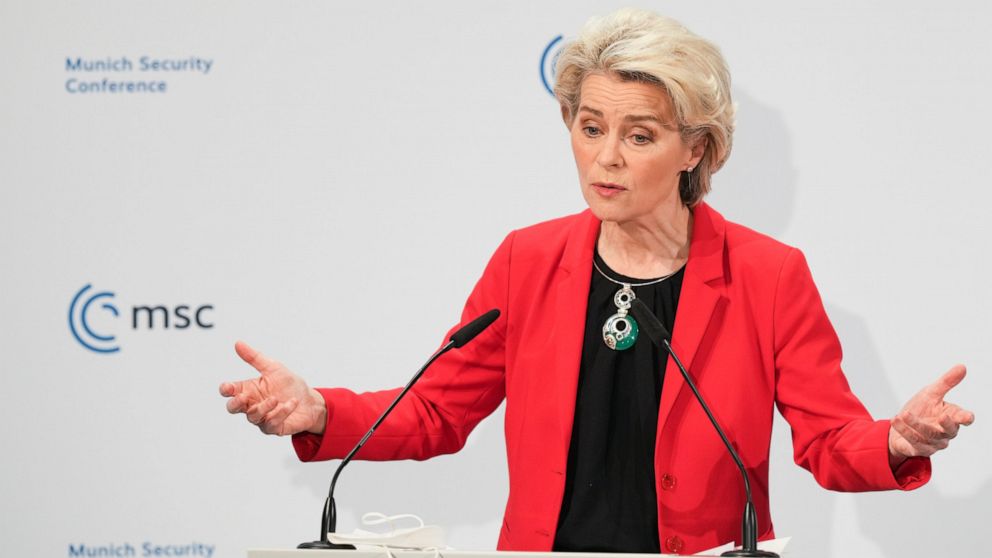 MUNICH — Moscow would have its access to financial markets and high-tech goods limited under Western sanctions being prepared in case Russia attacks Ukraine, a top European Union official said Saturday.

The comments from Ursula von der Leyen, head of the EU’s Executive Commission, came as tensions over Russia’s intentions toward Ukraine intensified. US President Joe Biden said Friday he was convinced” that Russian President Vladimir Putin has decided to invade the neighboring country.

“The Kremlin’s dangerous thinking, which comes straight out of a dark past, may cost Russia a prosperous future,” von der Leyen said during the annual Munich Security Conference, where US Vice President Kamala Harris also spoke.

Von der Leyen said the EU’s executive arm has developed a “robust and comprehensive package” of possible financial sanctions against Russia with the US, UK and Canada.

“In case that Russia strikes, we will limit the access to financial markets for the Russian economy and (impose) export controls that will stop the possibility for Russia to modernize and diversify its economy,” she added. “And we have a lot of high-tech goods where we have a global dominance, and that are absolutely necessary for Russia and cannot be replaced easily.”

British Prime Minister Boris Johnson said the UK was coordinating its sanctions closely with the EU.

“If Russia invades its neighbor, we will sanction Russian individuals and companies of strategic importance to the Russian state and we will make it impossible for them to raise finance on the London capital markets,” he said in Munich. Johnson added that authorities would look for “the ultimate beneficiaries” of Russian-owned companies and entities.

German Chancellor Olaf Scholz said that, during a meeting Tuesday with Putin, he “made clear that any further violation of the territorial integrity of Ukraine will have high costs for Russia, politically, economically and geo-strategically.”

Western leaders so far have not specified what precise Russian action would trigger sanctions. A French official who wasn’t authorized to be publicly named and spoke on condition of anonymity after Biden conferred with several counterparts on Friday said they were talking about an invasion of territory currently under the control of the government in Kyiv.

“It is in the event of an invasion of this territory that … the massive sanctions that we are talking about would be triggered,” the official said.

Parts of eastern Ukraine are under the control of pro-Russia separatists who have been fighting Ukrainian forces since 2014, the year Russia that annexed Ukraine’s Crimean Peninsula.

German Foreign Minister Annalena Baerbock, asked what Russian actions would trigger sanctions, didn’t offer any details after a meeting in Munich with her counterparts from the Group of Seven industrial powers and Ukraine.

She said Western officials have made clear that an actual invasion isn’t the only possible scenario but “are prepared for every situation.” Using a chess analogy, the German minister said: “If you present your next five moves in public, you won’t be particularly successful.”

In Munich with other members of the US Congress, House Speaker Nancy Pelosi said sanctions might include the SWIFT banking system, which could cut Russia off from most international financial transactions.

Kicking Russia out of SWIFT would also hurt other economies, including those of the US and key ally Germany.

Asked whether Congress, which is in recess next week, would come back early if Russia invades Ukraine, Pelosi said “the president has the authority to implement those sanctions without the Congress.”

Regardless of what actions Russia takes, Pelosi said there’s a price to pay for what Putin has done already.

“You can’t bully the world and take a walk and you’re off the hook,” she said.

Geir Moulson reported from Berlin. Angela Charlton in Paris and Jill Lawless in London contributed to this report.