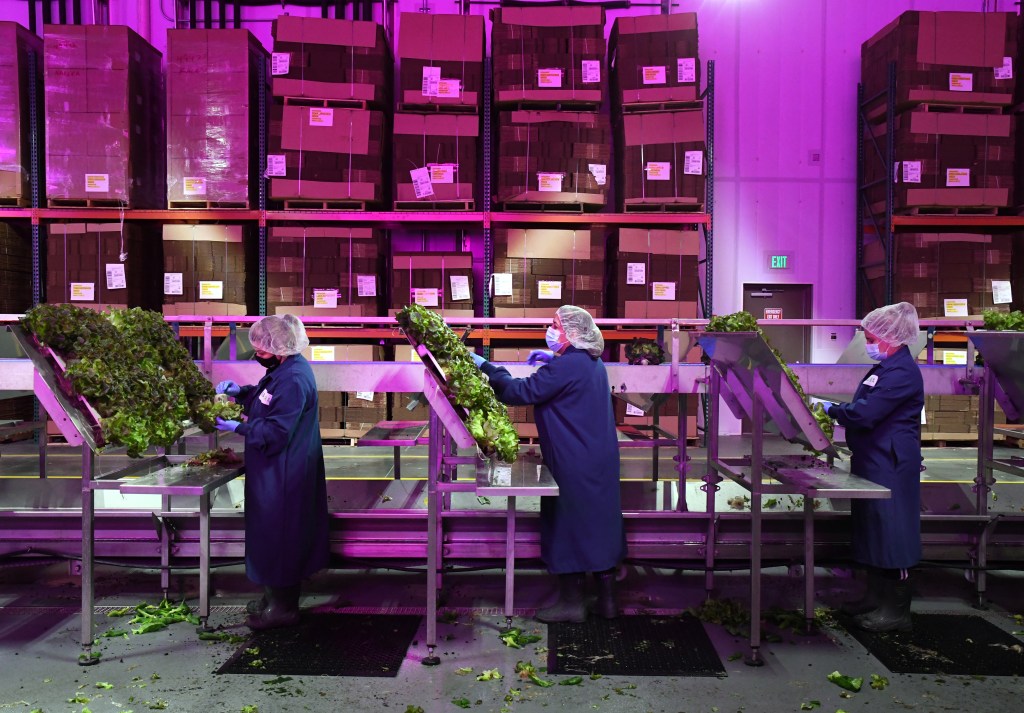 The tall block building just north of Interstate 70 resembles all the other tall block buildings along a commercial and industrial strip in Aurora. Visitors must wash up, put on masks, hairnets and lab coats, and walk on an antimicrobial mat before entering a huge clean room.

But the products dealt under the magenta color LED lights are not computer chips or other high-tech parts. These are different varieties of lettuce that will be harvested and shipped to grocery stores and restaurants in the Denver area.

The company began operations about a month ago in a 90,000 square foot warehouse, which Nissen says is operating at 30% capacity. Over the next few months, Kalera plans to increase its workforce from 40 to around 100 and operations at full capacity to harvest around 15 million head of lettuce, or 2.5 million pounds.

Kalera has farms in Orlando, Florida, Atlanta, Munich and Kuwait. Farms are under construction in Honolulu, Seattle and Singapore.

“We’re trying to produce food on a large scale in an urban area, close to where people live,” Nissen said. “We want to let people know that technology is involved, but it produces food naturally, without the use of chemicals or genetic modification.”

Kalera Farms use hydroponics – water – to grow lettuce and microgreens, or vegetable seedlings. The New York Times reports that the number of vertical farms is expected to increase as demand for year-round produce and the impact of climate change on agriculture increases. The industry is expected to grow globally from $3.1 billion in 2021 to $9.7 billion by 2026, according to data analytics firm ResearchandMarkets.com.

The US Department of Agriculture says that in addition to providing fresh locally grown produce, vertical farms could help boost food production as the world’s population is expected to surpass 9 billion by 2050.

“Why vertical farming” is a question that Nissen often asks. His answer ?

“We are running out of farmland,” Nissen said. “There is not enough arable land on the planet right now to feed all the people who will live on the planet. What do we want to do about it? »

Growing produce in areas where it will be sold means fewer truck trips across the country and fewer greenhouse gas emissions, he added.

And because Kalera is a company that seeks to thrive, it wants to help shape an industry that is poised to grow.

Kalera sells its products at 200 Denver-area King Soopers and a growing number of restaurants. Nissen said the sales team is working to increase the number of customers. One argument is that Kalera employees pick and ship fresh produce every day.

A criticism of vertical farming is its high initial costs. Nissen recognized that a commercial vertical farm is expensive to build and operate. He didn’t reveal the cost to open the Aurora facility, but said a full-scale facility “costs around $10 million.”

“We are still expecting a good economic return,” Nissen added.

Another challenge is the large amount of energy required for the operation. Plants in rows 12 piles high spend between 14 and 16 hours in a day under magenta light, a mixture of red and blue light considered optimal for plant growth.

Nissen said the warehouse LED lights are very efficient. The company also has an agreement with the power company to keep the lights on at night when many other customers aren’t using much electricity.

“We get our energy from the grid and over time the grid becomes more and more renewable,” Nissen said.

Kalera’s goal is to get at least 50% of the electricity for the farm being built in Honolulu from onsite solar power. Nissen said the company would like to use solar power on other farms, but the capital investment is high and the payback period takes many years.

“This is an area where I think it would be helpful for the government to help provide tax incentives to find the right long-term answer,” Nissen said.

Vertical farms also use a lot of water — again and again. The water that feeds the plants under the trays on which they rest is recycled. Water entering the system is filtered and purified and purified each time it is recycled, Nissen said.

Company scientists estimate that Kalera farms use about 95% less water than traditional farms.

Because the lettuce is grown in a clean room, it doesn’t need to be washed multiple times like produce grown outdoors, Nissen said. Workers pick the lettuce from the trays and quality control technicians inspect the heads for any signs of disease or abnormality.

“If it doesn’t look perfect, we don’t want it to come out,” said Katie Parks, quality assurance supervisor.

Parks and other employees report plant status by computer. Kalera donates products that are rejected because of their size or appearance to local organizations. Parks said Kalera was talking to the Denver Zoo about taking the products.

Another difference between vertical and traditional farming is the growth cycle.

“The growth cycle of conventionally grown produce is to plant it in the spring, pull it up in the summer or fall,” Nissen said. “We get 13 growth cycles a year.”

Initially, workers use a machine to inject seeds into peat trays. The trays are put in a humid place for about 48 hours for the seeds to germinate. After a short period in the “nursery”, a machine transplants the seeds into larger trays, which are then placed in the piles under the lights for about a month.

“Most seeds in the world today are bred for weather resistance, insect resistance, and disease resistance, not necessarily for flavor and texture and the things humans like,” Nissen said. “By growing indoors in the perfect climate, we are able to create new varieties that are more nutritious, fresher and tastier.”

New varieties are developed by breeding for specific traits, not by genetic modification, Nissen said. Further developments could include expanding into the cultivation of different types of berries.

Hannah Westergaard, horticulturist and production manager at the Aurora plant, said it was important to be able to recycle water, especially as the region’s climate becomes hotter and drier. Much of the lettuce Americans eat is grown in California and Arizona and much of the water used is wasted, she said.

“There’s no perfect way to farm and I think there’s a time and a place for all kinds of farming,” Westergaard said. “But if we’re trying to make food more accessible to the consumer, cheaper for the consumer while maintaining the nutritional benefits we need, we need to use all the tools in the toolbox.”