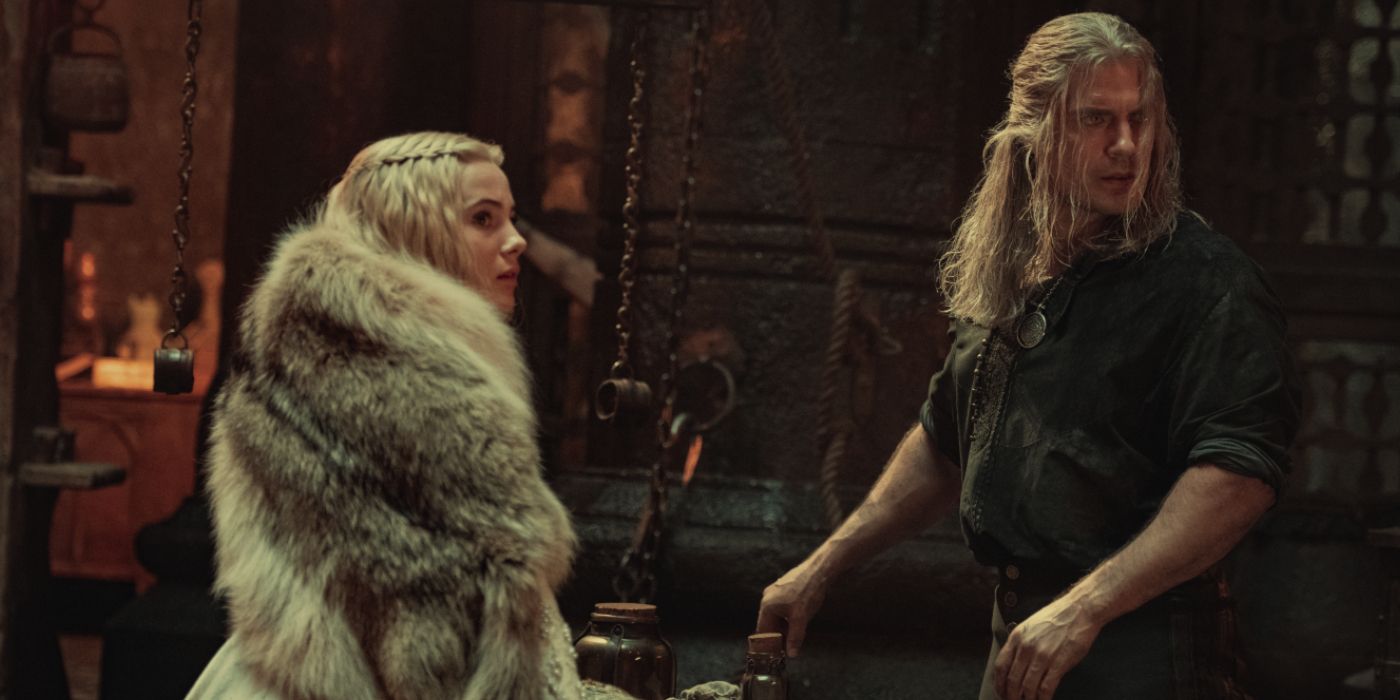 the witcher set the code for Geralt in Season 1, Episode 1, “The Beginning of the End”. After stumbling in the middle of a conflict between Stregobor, a mage, and Renfri, a princess, both sides forced Geralt to choose”the lesser evil.” Thus, Geralt had occasion to denounce the concept of degrees of evil:Evil is evil. Lower, upper, middle: it’s the same thing. If I have to choose between one evil and another, then I prefer not to choose at all.“This line fulfilled several functions. It was immediately quotable and revealed the kind of person Geralt was, but it was also a code that needed to be broken.

Related: The Witcher: The 3 Schools Of Canon Show Explained

In order to protect Ciri from the greater evil in the witcher season 3, Geralt may have to become the lesser evil. Although he prefers to avoid human politics, Geralt has moved further and further away from the relative simplicity of monster hunting in Season 2. Additionally, humans have proven to be the biggest monster on the continent; with many humans seeking to harm Ciri, in the witcher season 3 Geralt will no longer have the luxury of staying away.

Humans are the worst monster on the continent

The line between monster and human is often blurred in the witcher. Duny and Nivellen, for example, were both men cursed to look like beasts. Geralt had the opportunity to kill them, but held back due to their residual humanity. Eskel, on the other hand, was infected with a leshy, which led to him becoming one himself. Geralt made the decision to kill his old friend because the monster overpowered the human.

the witcher never portrayed monsters as inherently evil. The monsters terrorized the continent in Season 1 and Season 2, but not as part of any grand design on their part: killing is simply in their nature. However, humans in the witcher knowingly committed monstrous acts. In season 2, The White Flame killed the baby elf. In Season 1, Calanthe attempted to murder Duny to prevent him from marrying his daughter. It was humanity’s thinking capacity for monstrosity that led Geralt to keep his distance.

When Calanthe tried to bribe Geralt to kill Duny, he refused. In the witcherseason 1, episode 4, Geralt said to Dandelion, “I don’t kill nobody, not for little man quarrels”, to which Dandelion replied, “Yes, yes, you never get involved, except you actually do, all the time.“Therefore, while Geralt expresses his distaste for human behaviors, he interferes more than he realizes. Later in the same episode, it was Geralt’s interference that led him to claim Ciri by the witcherThe law of surprise. Although he had a clear moral code, Geralt never completely stuck to it.

Related: How Long Do Wizards Live?

Geralt must protect Ciri from humans more than monsters

the witcher Season 2 showed another side of Geralt. After bonding with Ciri in the Season 1 finale, Geralt had one responsibility, which was to protect her. While there was no shortage of monsters pursuing Ciri in Season 2, the real threat in the witcher season 3 will be people. This was set up near the end of Season 2. The elves believed Ciri to be their savior due to her Elder Blood; Nilfgaard wanted to find Ciri as The White Flame is her father; the Brotherhood decided that killing Ciri was the only way to stop Nilfgaard. the witcher season 3 will see Ciri’s destiny become the political center of the continent.

This means that Geralt’s preference to avoid human conflict will have to be ignored. Most likely Geralt will have to kill people because of “the little quarrels of men.” However, this moral sacrifice is one he will make in order to protect Ciri. Audiences have already seen how far Geralt is willing to go to keep him safe. He was even willing to kill Yennifer, the woman he loves, for endangering Ciri’s safety. He should be ready to kill anyone else who threatens him in the witcher season 3.

‘Evil Is Evil’ Still Sets Geralt’s Code, But Not Like Season 1

In the witcher season 1, Geralt’s moral code was oversimplified, which is why he broke it in the show’s first episode. Although he insisted there was no lesser evil, Geralt chose an option. Stregobor and Renfri both wanted themselves dead. At first, Geralt didn’t want to kill either of them. However, when he realized Renfri planned to slaughter everyone in Blaviken to lure the mage out, Geralt decided that killing Renfri was the lesser evil. This earned him the title “The Butcher of Blaviken”.

In Season 2 Episode 1, Geralt attempted to go down the path of non-intervention. He left Nivellen alive because, although he deserved to die, Geralt was unwilling to make that choice. However, when it came to protecting Ciri, Geralt showed his willingness to become the lesser evil. When Eskel turned into a leshy, doing nothing would actually have been the greatest evil, as Eskel would have killed Vesemir and Ciri. There was no time to search for a cure; therefore, the witcher killing Eskel was the lesser evil. Importantly, Geralt only made this decision to keep Ciri safe. When Ciri was possessed in the witcher season 2 finale, Geralt refused to allow the other Witchers to kill her. Morally, killing Ciri would have been the lesser evil, just as killing Eskel was. Geralt’s choice to protect Ciri resulted in the deaths of several of her Witcher brethren.

Inevitably, Geralt’s moral code will evolve again in the witcher season 3. In season 1, Geralt had no major responsibilities outside of himself. The ability to choose to do nothing was a luxury he could afford. However, with Ciri now threatened from every angle, Geralt must prove he is capable of performing seemingly evil acts in order to protect her. Evil will always be evil in the witcher season 3, but Geralt will have to be more demanding on his degrees than he has been in the past.

Next: Will Geralt forgive Yennefer? The Witcher Season 3 Future Explained

It Took 45 Years, But Star Wars Finally Gets The Right C-3PO