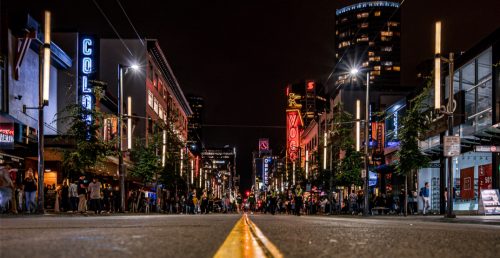 Following the relaxing of COVID-19 measures, the Granville Strip reopened with a bang on Friday, February 18 as nightclubs and bars were able to return to some sense of normalcy.

According to Vancouver Police, as thousands packed the Granville Entertainment District, they’re investigating a stabbing.

A 25-year-old man was stabbed and critically injured in the early morning hours of Saturday, February 19.

Just before 2 am, VPD said its officers stepped in during a violent assault near Smithe and Granville Street.

#VPDnews: #VPD is investigating after a 25-year-old man was stabbed and critically injured in the Granville Entertainment District shortly before 2:00 this morning. A 21-year-old Surrey man has been arrested. https://t.co/OIC2Tv4gTj pic.twitter.com/zAcqZjwQjL

“Officers from VPD’s Emergency Response Team provided immediate first aid to stem the bleeding before the man, a Vancouver resident, was taken by ambulance to hospital for emergency surgery. He is now expected to survive,” said police.

While the investigation is ongoing, police say a 21-year-old man from Surrey was arrested at the crime scene.

“VPD deployed additional officers in the downtown core Friday night, as capacity limits were lifted at bars and restaurants throughout the province,” said Sergeant Steve Addison in a release.

“Large crowds began entering the downtown core in the early evening, with some lining up early at nightclubs and hundreds wandering the entertainment areas. This led to multiple conflicts on the street.

As the party continues on Granville Street this weekend, VPD say they’re going to have “additional officers to manage crowds throughout the long weekend.”