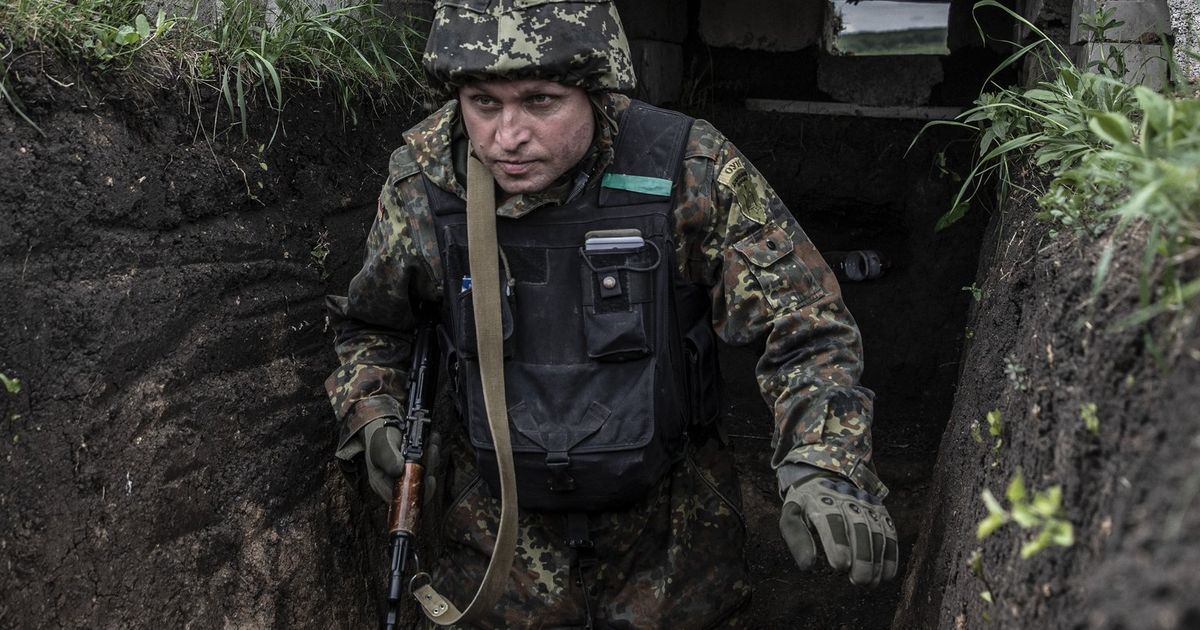 DONETSK REGION, Ukraine – The ground under the Ukrainian positions was scorched black, scorched by flares dropped by Russian planes. The green wheat fields beyond were riddled with craters carved into the earth by Russian artillery strikes.

“It was such a beautiful scene,” said the unit commander, looking across the rolling countryside Friday morning, “and they ruined it, the pigs.”

The commander, who asked to be identified only by his code name, Kandalaksha, leads a volunteer unit camped in the hills of eastern Ukraine. For two months, the unit has held part of the line south of the town of Izium, blocking a Russian offensive to encircle and seize the eastern region of Donbass.

Kandalaksha is a kind of anomaly. He comes from Russia and describes himself as a political refugee. Opposing the government of President Vladimir Putin, he left his native country in 2014 when Moscow annexed Crimea and began supporting a separatist war in the eastern regions of Luhansk and Donetsk.

Shortly after arriving in Ukraine, he took a step beyond political activism and joined a volunteer military unit in 2015. “I was looking for myself and looking for a way to be useful” , did he declare. “I thought it would be more honest to go and fight for the country.”

When Russia launched a full-scale invasion of Ukraine in February, he again volunteered and fought in the northwest suburbs of the capital, Kyiv, for a month. Then, as Russia withdrew from Kyiv and concentrated its forces on the Battle of Donbass, its unit was also sent east.

“We don’t see them, but they’re shelling us,” he said of the Russians positioned about 10 miles from his outpost. “Rarely a day goes by without shelling. They try to bite us, but our forces hold their positions and won’t let them advance.

Ukrainian forces are coming under increasing pressure in eastern Ukraine as the Russian military has changed tactics. It focused its forces and firepower on a much smaller target with a more limited objective: to encircle a final crescent of towns and villages belonging to the Donetsk and Luhansk regions, the two separatist areas where hostilities between Ukraine and Russian-backed separatists simmered for eight years.

Every few days, soldiers from this unit head to the front line, which they call Ground Zero, relieving others who trade for a break from the beating artillery. The soldiers are caustic about the type of warfare they wage in the open countryside in eastern Ukraine. They describe themselves as cannon fodder, and reduced to “cotton” or stuffing under heavy artillery barrages.

But their morale seems high and, as volunteers, most say they are convinced of the need to resist Russian aggression.

One of the volunteer soldiers is a theater director, another professor of economics at the university.

“It’s a lot harder to just sit around and do nothing,” said the speaker, who goes by the code name Academic.

Maksim Bulgakov, 40, the director of the theatre, said he never wanted to join the army. “My father, my brother and my grandfather were artillery officers, but I never wanted to be,” he said. “But it is such a time. You have a problem and you need to decide.

The men and a woman are lying low, sleeping in a farm building and keeping out of sight of Russian drones during the day. They fire artillery cannons from rows of trees in the area, but did not allow visiting reporters to see them.