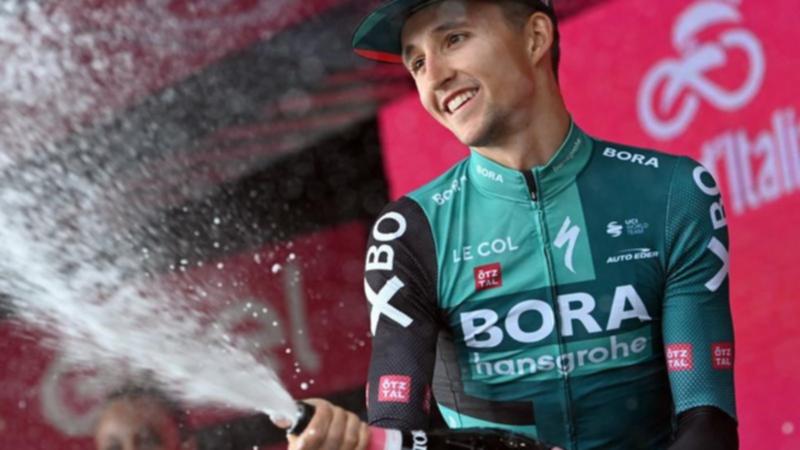 A puncture in stage 18 of the Giro d’Italia could not prevent Jai Hindley from retaining second place with three days remaining.

The Aussie suffered a puncture in the final three kilometers which meant he got the same finish time as the other leaders he was riding with when he had to stop for mechanical assistance.

Belgian Dries De Bondt won as a four-man breakaway stole the last opportunity for the sprinters.

Richard Carapaz, the 2019 champion and gold medalist at the Tokyo Olympics, maintained a three-second lead in the overall standings over Hindley, who was runner-up in 2020.

The mostly flat 156km race from Borgo Valsugana to Treviso should have been reserved for fast men, and the last bunch sprint of this Giro.

But the sprint teams got it wrong as the breakaway remained clear, with De Bondt beating Edoardo Affini, Magnus Cort and Davide Gabburo to the line.

Joao Almeida, who moved from third to fourth on Wednesday’s stage in Lavarone, did not start on Thursday after testing positive for Covid-19. The rest of the UAE Team Emirates team and staff returned negative tests.

The peloton seemed to have the breakaway under control for most of the stage, but after the top four picked up the pace on the short but steep climb of the Muro di Ca del Poggio about 50km from the finish, they dug a gap the peloton failed to close.

Asked how they held up against the peloton, De Bondt said: “The collaboration of the four of us was magnificent. Nobody skipped a corner. It was full, full, full.

“Everyone thought it would be a sprint, that it was written in the stars, but the four of us made a plan and we stuck to it.”

The remaining three stages will determine the winner: grueling mountain stages on Friday and Saturday followed by a hilly individual time trial that will close out the race in Verona on Sunday.

“I checked Landa and Hindley the whole time because I knew there might be some gaps,” Carapaz said. “I want to keep the maglia rosa until the end, I have confidence in my legs.”