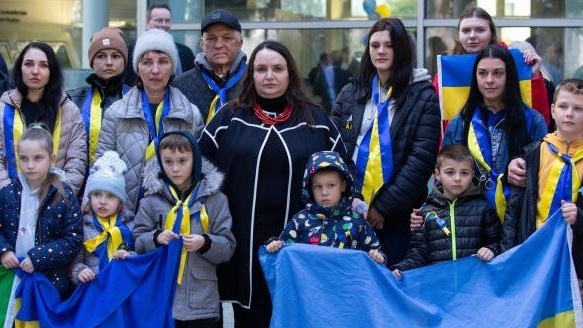 A Wexford hotelier has said that providing accommodation for refugees will become “unsustainable” as summer season hits unless more support comes from the Government.

The Danby Hotel is currently hosting over 40 Ukrainian people across 27 rooms, catering to refugees who have arrived into Rosslare Europort nearby.

But manager Ocean Song said bar and restaurant sales are down 40 percent over the past fortnight, which he said won’t be possible to maintain past its current contract with the Department of Children into July.

“We’re happy to provide the space here but we have a decision to make once we hit June. We’re trying to do our best to support them. We’ve refused a lot of bookings and this is stopping our business when we’re usually flat out.”

The hotel is paid the winter rate for a guest by the department for each person it hosts, roughly €25-€35 less than the summer rate.

“Lots of Irish people and English people would pass by here normally and stay with us and that’s not happening now. It will be very difficult [if the rate isn’t increased].”

He said the business is still suffering the after effects of the pandemic, as it previously catered to package visits from Chinese tourists.

“June is the barrier for us; we need to decide then. If they raise the rate we’ll probably provide it, but if not I have to consider my costs. There’s an energy cost in this, plus food and staff. We have 20 people employed here in this hotel, it’s a mixture of five full-time and 15 part-time but I can’t pay for the staff’s hours.”

During a visit to the hotel this week, Minister of State at the Department of Rural and Community Development Joe O’Brien said he had become “clear” that Ireland “is maxing out on hotel places” as an option for refugees.

He said a shortlist of 500 buildings had been identified by local authorities around the country which should provide accommodation instead of hotels but suggested they may not be ready for several weeks.

The area of ​​Rosslare Harbor is a temporary home to over 250 refugees at present across three hotels and numerous families who offered to host people.

Emily O’Rourke, community development officer with the Wexford Local Development Company, told The Irish Times that it has been a “lot of pressure on a small area” and called for more help.

“There was €50,000 donated in the past month in the area – it’s not sustainable. If that’s the kind of need going forward, it’s not that the funds will be drying up, but it’s just not financially viable.”

Ukrainians staying at the Danby Hotel said they need language teachers as the vast majority of refugees have little English. “Those lessons cannot be done on a voluntary basis beyond the short-term,” Ms O’Rourke stressed.

“Everything is very fast, very new. We’re still at the bottom rung of accommodation, food and clothing but we’re now trying to move on and provide what’s needed next.”

One of those staying at the hotel, Olena Tolstokarova, has over a decade’s experience as an air traffic controller and wants to return to the work in Ireland. She also hopes to move on and rent somewhere to live in the coming weeks. “I need to emphasize that the people here are amazing, but that’s what I need and it would be a dream to do it.”

Artem Tiupin arrived into Ireland after “moving from bunker to bunker” in Ukraine to escape. “I want to continue my studies. I was majoring in computer science in my second year when everything started. Whether I can continue with a grant or a scholarship, I don’t know, I’m trying to see how it works. I want to be part of a student community here.”