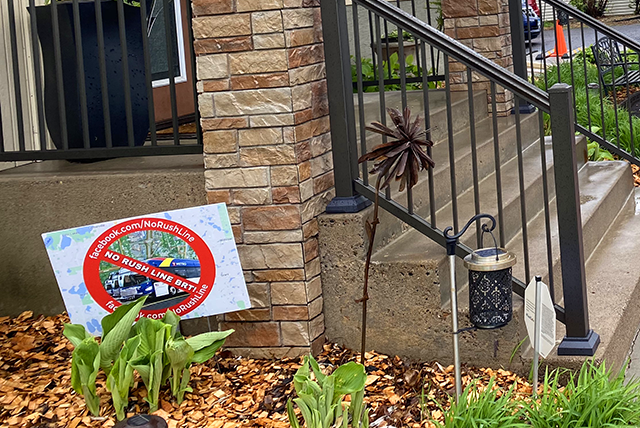 It’s not something you see every day, at least not in liberal Ramsey County: a room full of older white people in a frenzy over…better bus service.

This happened about six months ago in an event in downtown White Bear Lakea lake suburb of 25,000 inhabitants with a historic town center that almost everyone describes it as quaint. Over the past few months, a new group of local politicians have campaigned against a previously innocuous investment in public transit. After November’s election brought the anti-bus contingent to power, regional transit planners were forced to strike a last-minute compromise.

The White Bear bus backlash stems from long-standing plans for transit through Ramsey County, from downtown St. Paul and the East Side, to Maplewood, Vadnais Heights and terminating in White Bear Lake. Formerly called the Rush Line (now the purple metro line), the project is in the process of obtaining federal transit funding. It would be one of two new bus rapid transit (BRT) routes in the Eastern Metro that would begin construction soon and could enter service in 2026.

Those plans have likely changed, thanks in part to the anti-transit town hall, with a mocking, hostile open-mic atmosphere reminiscent of a Trump rally. Sponsored by outspoken City Councilman Bill Walsh, the public testimony offered a cohesive and confusing mix of misinformation, dog whistles and anti-government screeds. The opening of the discussion was framed by Tim David, the founder of an anti-transit website called the No Rush Line Coalitionwhose first page declares in bold “STOP THE BUS INVASION”.

So what’s really the deal with the Purple Line? Sorting through the complaints, I boil them down to three things: traffic, cost, and public process.

From a transit planning perspective, while the Purple Line BRT isn’t a home run, for an Eastern Metro project, it’s as good as you’ll find. Although our region’s approach to transit planning has serious flaws, the Twin Cities do a much better job than most US metros.

Yes, the Purple Line is expensive, with a construction budget of over $400 million. The cost is tied tightly to the federal transportation funding formula, and half of the money will come from federal grants, with most of the other half coming from a county-wide sales tax that is in place for years. If you look at transportation spending from the big picture, automobile travel is still by far the most subsidized mode of transportation in the country. Almost every wealthy country spends more on public transportation than the United States, a major reason for our high carbon pollution.

Another common complaint is that buses will aggravate local traffic, an argument that flies in the face of common sense. Downtown White Bear Lake currently sits on Highway 61 (the historic passenger rail route) and approximately 30,000 vehicles use the highway daily; a few dozen more buses would be a tiny fraction of that, and whoever takes the buses will likely be pulling cars off the freeway.

The last key kvetch is about process, in which case I have to point out that if the BRT project is a surprise, you haven’t been paying attention. Among other things, for nearly 20 years, signs placed along the Bruce Vento Recreational Trail — a key part of the route — have told anyone passing by that “this right-of-way is designed for a possible future light rail transit.” I’ve walked past these signs for years, watching their once brown paint fade in the sun and imagining the transit line that would one day occupy the trail.

Reading behind the lines of outrage – the only way I can understand the angry taunts – the concerned citizens of White Bear Lake react to a perceived change in character from the city.

But it is the call to “stop the bus invasion” that raises the obvious question: Whose invasion?

As is often the case, the breed is the elephant in the room. White Bear Lake is an affluent suburb that is 90% white, while St. Paul is much more racially and economically diverse. According to Met Council data, White Bear Lake has only built a pittance of affordable housing in the past 20 years, making it virtually impossible for the working class to live there. As one activist railed against “public transport, urbanization and dense housing”, it was not difficult for the public to connect the dots.

The fomented transit reaction takes a page straight from Scott Walker’s playbook. In 2010, Walker, then a candidate for governor of Wisconsin, cited Chicago and Milwaukee to run against a high-speed rail link that had already received federal funding. The art of circumventing explicit racism is so entrenched in American politics that at this point it’s practically the national language.

In this case, a White Bear political candidate, since elected to city council, pledged to “prevent White Bear Lake from becoming downtown St. Paul.” The current mayor has promised that he will “preserve and protect White Bear Lake” from the bus. Another speaker warned the public against “downtown”. Every call not to “destroy our downtown” was met with loud cheers.

The irony of the campaign to ‘preserve White Bear Lake’ is that its cherished town center wouldn’t exist without quality public transit from downtown St Paul. Starting in 1871, White Bear Lake was a stop on the Lake Superior and Mississippi Railroad (now the Minnesota Commercial), which brought people to and from downtown St. Paul in 20 minutes.

In the 1890s, the streetcar followed suit, and the city grew as the northeast terminus of the Twin City Rapid Transit Company. Most of today’s downtown streets were developed during this time, while White Bear Lake and the nearby resort town of Wildwood became urban destinations.

About 50 years later, transit service slowly declined in importance in White Bear Lake as suburbanization enveloped the old downtown. Regular all-day bus service was cut in the 2000s during a budget crisis, and the city’s express bus service disappeared during the 2019 COVID pandemic.

The Met Council is looking for alternatives

The Purple Line promised to return quality public transit to White Bear Lake, restoring the car-free connection to St. Paul that built the town in the first place. It could still happen, in a roundabout way.

“I happen to live in White Bear Lake and am very supportive of clean energy, public transit options and connecting to the area,” said Victoria Reinhardt, which represents Maplewood, Vadnais Heights and White Bear Lake on Ramsey County Council. “I supported from the beginning, and we tweaked things to make sure it met the needs and in an environmentally preferable way, namely with electric buses.

Despite the electric buses, the Purple Line is in a state of flux thanks to new political opposition from the town hall of White Bear Lake.

Earlier this month, the Met Council began study alternatives this would cut off the White Bear stops from the official route. Even though the White Bear Lake Town Council gave official backing to the project five years ago, and despite the fact that the Met Council technically doesn’t need local permission to add bus service, elected officials like Reinhardt and agency leaders want to prioritize collaboration where possible.

Instead of queuing up to White Bear, a package would end the BRT at Maplewood Mall and have a second connecting bus continue north along White Bear Avenue to downtown White Bear Lake. Although this “Purple Connector” bus would not receive federal funding, it would restore regular bus service to the city for the first time in 20 years.

“The city center is so unique,” ​​Commissioner Reinhardt told me. “I have lived here for 47 years. I love this city and have been there for a lot of changes. One thing that hasn’t changed is the charm of downtown White Bear, and I don’t think having a bus into town every half hour is going to change that.

Personally, I was looking forward to taking the Purple Line to the historic, walkable blocks of White Bear Lake, filled with chiropractors, pilates studios, and small businesses offering everything from CBD oil to yarn and more. by the maritime tchotchkes. Truth be told, I would have gone straight to the Big Wood Brewery to chat with the locals about their boats. From now on, anyone wishing to continue to the suburban enclave will have to go to the mall and board a smaller, less frequent bus to reach Banning Avenue.

For me, it’s a shame. Years from now, looking back at a desperate time for climate action, people will be amazed that residents of a walkable suburb rallied against electric bus service. Eventually, the purple line will be extended to White Bear Lake, an obvious destination along the upcoming corridor. For now, dog whistles have the upper hand, and a silly compromise will have to do.