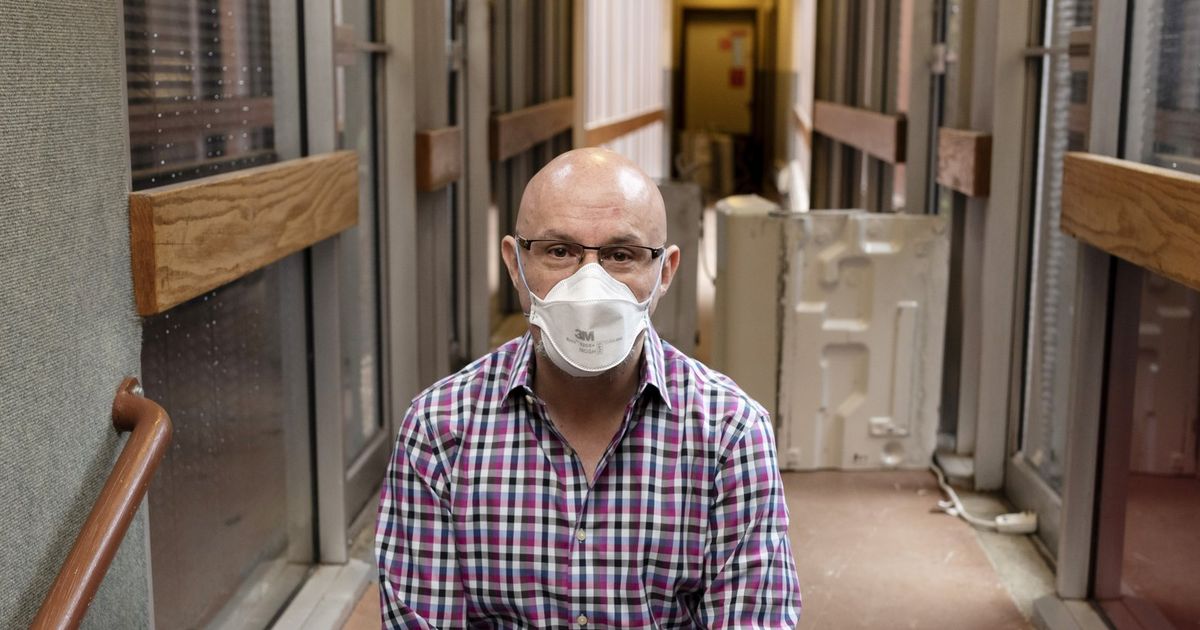 For 15 years, he has lived in the same apartment — a one-bedroom with an enviable private deck on the top floor of a building on New York’s Upper West Side.

So when a developer, the Naftali Group, bought the Manhattan building for $70 million in June and told tenants that they had to move, Ozsu made plans to stay. He could not be swayed with a buyout offer of $30,000, an eviction notice or even a $25 million lawsuit that Naftali recently filed against him. In April, the new landlord placed an industrial air filter outside Ozsu’s door, and the blower has been droning nonstop, driving him and his 13-year-old boxer mix, Penelope, up the wall.

Still, Ozsu won’t move. “It’s two things: I have the right to be here, and I have no place to go,” he said.

The Naftali Group says Ozsu is angling for a seven-figure payout and has put its multimillion-dollar investment in limbo, setting off a landlord-tenant stalemate that is the stuff of legend in New York City real estate. But the pandemic has added a new twist: A renter protection enacted to prevent evictions during the crisis could help drag out the standoff for years.

Under normal circumstances, Ozsu, 52, might have already been evicted from the building at 215 W. 84th St. His apartment is not rent stabilized, and like many of his neighbors, he was on a month-to-month lease that the new landlord was not obliged to renew.

But until recently, Ozsu, a freelance software engineer, was unemployed. In January, Ozsu applied for the Emergency Rental Assistance Program, a state program created during the pandemic to help tenants pay overdue rent. In most cases, a tenant cannot be evicted while their application is open. If Ozsu’s request for aid is approved, he could be entitled to stay in the apartment for at least another year — time he says he’ll need to build up savings from a job he began in March to meet the income requirements of other rental buildings .

Of the building’s 128 apartments, just 16 still have occupants, said Y. David Scharf, chair of Morrison Cohen, a law firm representing the developer. Ozsu is the only tenant who has not agreed to move, he said.

Ozsu and Adam Leitman Bailey, his lawyer, believe that the air filter and a security camera recently installed in the hallway outside his apartment, trained on his front door, are bullying tactics.

“It sounds like a jet,” Ozsu said of the air filter. “It feels like it’s at the back of your head all the time.”

Scharf said the air filter “is actually for his health and safety,” although there wasn’t active construction near the apartment during a recent visit.

“There has been no harassment, period, full stop,” Scharf said, adding that there are several cameras in the building. The one near Ozsu’s apartment was installed because of “general security issues,” Scharf said, citing an incident between Ozsu and one of the building’s workers. Ozsu said he called the police after the worker became aggressive with him over a parking dispute.

Ozsu moved into an apartment in the building, called the Eagle Court, in 2006 on the recommendation of a friend who had lived there. He landed the coveted top-floor unit a year later, with its deck that overlooks the Upper West Side. His job as a software engineer helped him keep up with rising rents through the years. By October, however, Ozsu was unemployed, had depleted his savings and could no longer pay the $3,350 rent on his 700-square-foot apartment.

The complex once was a driving community, former residents said. In 1984, Rockrose Development converted a row of disparate buildings — including the onetime Borden Milk Co. dairy (later converted to a garage) and a former Con Edison substation — into the Eagle Court apartments.

The odd union led to interesting design choices: studios that range from 400 to 1,000 square feet with 12-foot ceilings; duplexes and triplexes with private gardens; dim hallways with steep stairs that led to sunlit corridors.

Attracted to the building’s idiosyncrasies, many tenants lived in the building for years, Ozsu said.

“It was like Melrose Place, without the sexual scandals,” he said, recalling one couple who hosted open-door happy hours in their apartment on weekdays. Some days, Ozsu would lean over his deck and holler at his downstairs neighbors to join him for impromptu barbecues.

A former resident, speaking on the condition of anonymity because she didn’t want “drama” with the new landlord, said she left several months before the end of her lease because the building was quickly emptying and no longer felt like home.

Another resident said some tenants took settlements to end their leases early and signed nondisclosure agreements with the developer. A spokesperson for the Naftali Group said the developer could not discuss confidential settlement discussions.

The Naftali Group has yet to file plans for its new condo project. However, the site could support a roughly 210-foot tower, not including potential height bonuses that the developer might get for including affordable units or making subway improvements, according to George M. Janes, a New York urban planner who has studied the local zoning .

On the corner of East 86th Street and Madison Avenue, Naftali is building a 210-foot, 13-story tower with commercial space and 11 condo units, including a quadruplex penthouse, according to city filings. Prices range from about $8.5 million to $40 million, according to public records.

The most likely scenario at West 84th Street is a complete demolition of the 128-unit rental building to make way for a condo tower with a similarly small number of units, Janes said. A spokesperson for the developer said it was “still reviewing options for the site.”

The condo market is surging, a potential boon for holdouts such as Ozsu. Manhattan had the most apartment sales of any first quarter in 33 years, with nearly twice as many new development sales as in the same period last year, according to a recent report by the brokerage Douglas Elliman.

Similar conditions have led to a small number of eye-popping settlements for holdout tenants. In 2005, Herbert Sukenik, a longtime resident of the Mayflower Hotel, in the way of 15 Central Park West, a luxury tower, negotiated a $17 million buyout, plus the right to live at a nearby two-bedroom apartment overlooking the park for $1 a month. His lawyer, David Rozenholc, who specialized in tenant holdout cases, collected one-third of the settlement.

“I’ve settled three cases already this year, which is a quick pace,” Rozenholc said, noting that the pandemic has not stopped developers from proceeding with ambitious projects.

Developers sometimes agree to large tenant payouts because they can be less costly than postponing construction, said Steven Kirkpatrick, a partner at Romer Debbas, who primarily represents property owners but is not involved in the West 84th Street case.

“The theme of this is delay, delay, delay,” he said, noting that prolonged court motions and procedures could allow Ozsu to stay in the apartment for one or two years.

Scharf, a lawyer for the developer, said Ozsu was simply biding his time. In an affidavit filed in housing court in April, a member of the property owner’s legal team said they heard Ozsu’s lawyer wager that he could keep his client in the apartment for five years. (Bailey said such testimony “is a lie” — and that he doesn’t gamble.)

“Through counsel, he has made it clear he’s holding out for a ransom of north of a million dollars,” Scharf said.

Ozsu insists he is exercising his rights to stay in the apartment under the pandemic renter-relief program. This week, he tried to pay back the roughly $13,600 rent owed before the rental-assistance application was filed; the owner’s legal team said it would reject the payment, according to court filings.

Ozsu said that shortly after the $25 million suit was filed against him, he was offered around $30,000 to leave the building but rejected it. Naftali Group declined to confirm the offer.

It’s also a matter of principle, Ozsu said. “It’s the defamation of my character — that’s when I said, ‘No, I’m going to fight this.’”

This story was originally published at nytimes.com. Read it here.