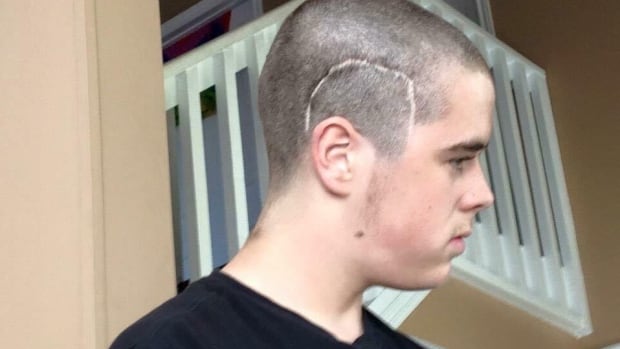 Dr. Paul Patey knows that a young man can lose his life if he does nothing.

The ambulance he’s in rushes to St. John’s, carrying a teenager who desperately needs his recently injured brain drained.

Armed with a scalpel and drill he borrowed from a maintenance man at the William H. Newhook Community Health Center in Whitbourne, Patey tells the paramedic driving to find a safe place to pull over so he can try to punch a hole in the young man’s skull. .

“I took the drill and put it against the bone,” Patey recalled.

“I took it out, and dirty old blood started coming out like cranberry sauce.”

Enjoying a hot day in a Marystown park, Taylor Jackson, now 27, pushes his two boys, Roman, 4, and Carter, 8, on a swing with his wife.

He sat down to share his story as a cautionary tale to kids he saw around town riding bikes without helmets.

“It’s really not something I would wish on anyone else,” he said.

“It was a great thing, summer softball,” Jackson said.

The game ended around noon and he jumped on his bike to go home. He pushed down a hill – then it all came to a screeching halt.

Bombing down a dirt road hill, he’s not sure what happened, but his helmetless head went over the handlebars and crashed into a rock.

“It all happened so fast,” Jackson recalled. “I fractured my skull and I didn’t really know it.”

Somehow, Jackson got off the ground and, despite excruciating pain, managed to pedal to his aunt’s house before his grandmother rushed him to Whitbourne Medical Clinic.

“As soon as I got to my grandmother’s house, everything went black for me. I don’t remember much. I was conscious and unconscious,” Jackson said.

“I woke up two weeks later to find I had had brain surgery and a plaque inside my head.”

Patey, who had officially retired a few years earlier, remained busy doing the job he loved – filling in as a family doctor in rural hospitals.

It’s something he’s done all over Newfoundland, but with Whitbourne about an hour’s drive from his home in St. John’s, it was one of his favorite places to fill an alternate position.

A graduate of McGill Medical School in the late 1960s, Patey had years of rural medical practice under his stethoscope as well as more than 25 years at the Health Sciences Center and McGill School of Medicine. ‘Memorial University. To keep busy, he offered to fill places throughout the province that needed a short-term doctor.

When Jackson’s grandmother dropped him off at the hospital that July day, he immediately understood the seriousness of the situation.

“I said to the nurse, ‘We have a disaster here,'” Patey said.

At this time, Jackson was still conscious, but he could not speak. When the doctor asked him to, he couldn’t move his toes or fingers to one side of his body.

Patey said the young man needed a CT scan and a team of doctors not available at Whitbourne Health Centre.

With an ambulance on the way from nearby Smith Ambulance Services, Patey made sure he had everything he needed for the hour-long journey to Janeway Children’s Hospital in St. John’s.

Wear your helmet for the love of living, not for the fear of dying – Dr Paul Patey-Dr. Paul Paty

He grabbed a scalpel from the medical center and then asked a staff member to get a drill and some drill bits – if things went wrong with Jackson, he knew the 12-volt electric drill might be the only thing on board. the ambulance to save his life. .

Patey explained that the brain needs to be in a protected space – the skull – but when the skull is damaged and it fills with blood, there isn’t much room left.

“It squats the brain,” Patey said. “If you squat the brain enough, you kill it.”

The first thing he did was make sure the drill was working.

“There’s no point in going down the road and finding a dead battery,” he said.

With a paramedic in the back joining a nurse from Whitbourne Medical Center, they put Jackson in the ambulance and took her to St. John’s.

The experienced doctor knows that Jackson needs a hole drilled in his brain to drain some of the blood, but the teenager is still conscious.

Patey tells the paramedic at the wheel to get ready to pull over, disinfects the drill bit – to clean all the drywall from the last hole he drilled – and the crew of three in the back begin to drill. practice drilling.

With the nurse holding Jackson’s head, Patey uses a padded head guard to make sure he doesn’t drill too far into the skull.

In a twist of fate, Patey said a few weeks earlier he had shown his grandson how to properly drill holes in plywood to avoid messing up his workshop.

With Jackson’s pulse dropping to 35 beats per minute, Patey begins with an incision in Jackson’s scalp to gain unobstructed access to the skull, with the paramedic pulling the scalp back and the nurse holding his head in place .

A quick pull of the trigger on the electric drill – and it’s done.

“We knew we had taken the pressure off. Now we had a different problem,” Patey said.

“We had the bleeding in his head, but now it could come out through the hole, so the pressure wouldn’t get worse. [But] we had bleeding in his scalp because we had to make a very big cut.”

The clock was ticking to get Jackson to St. John’s before he bled to death, which they did – met by a team from the Janeway emergency room.

Few could have done what Patey did, says colleague

A former colleague of Patey said there were very few doctors in the province who could have done what he did that day.

But Patey takes very little credit for himself, instead praising the paramedics and nurse at Whitbourne and talking about the speed and organization of the Janeway staff who worked on Jackson’s brain before he was fired. stabilize.

Speaking as the 12th anniversary of the accident approaches, Jackson is filled with gratitude for everyone who helped him. But he chooses Patey.

“I’m very grateful for this man,” he said.

Patey kept the drill that saved Jackson’s life. The doctor offered it to him but he refused, saying the doctor should keep it as a souvenir of an amazing day they met.

Spread the message of helmet safety

When the weather near his home in Lewin’s Cove, Newfoundland, started to warm up last summer, Jackson noticed many young people riding their bikes without wearing helmets.

Concerned about what he was seeing on the streets of his Burin Peninsula home, he posted on social media a photo of a bloody scar and a brief recap of how not wearing a helmet has affected him. almost cost his life.

“It just upsets me because they don’t know the importance of it,” Jackson said.

“Some people think that’s not cool, but the scar I have on the side of my head isn’t really cool either. It will just put their parents in a really bad situation that I wouldn’t wish on anyone .”

Jackson watches his two sons run through Burin Park – two boys who have it in their minds to protect themselves with their helmets.

He feels no ill effects from what happened.

He spent 35 days in hospital recovering and had to learn to talk and walk again. When school started in September, Jackson was there.

Love of life, not fear of death

“A lot of people in these crashes don’t come out unscathed like me,” Jackson said.

“Some people are not so lucky, especially in this type of injury.”

“The best reason to put on a helmet is that you want to live a long and happy life,” Patey said.

“Look at Taylor. He still has 12 years of good life since he got a hole in his head. People who put their helmets on now can have 12 years of life with less chance of getting a hole in their head.

“So wear your helmet for the love of living, not for fear of dying.”