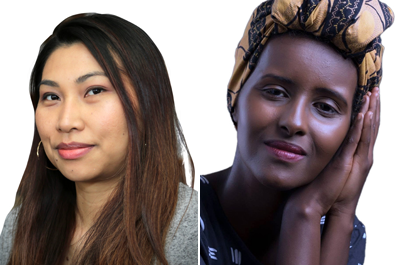 Lao writer and community activist Saymoukda Duangphouxay Vongsay is no stranger to accolades. She has won numerous local and national grants, won acclaim for her poetry and drama, such as the hit play “Kung Fu Zombies vs. Cannibals”, and her work has been supported here in Minnesota and across the country as well. Vongsay’s latest award has a slightly different focus, however. As a 2022 Bush Fellow, Vongsay is being supported for her leadership skills.

During the interview process, Vongsay recalls being asked what it would mean to her to get a Bush Fellowship. “I said, ‘Well, I got recognition for my work as an artist. I got grants and scholarships for my work as a playwright, poet, writer. But I never got any for my leadership,” she recalls. “It’s like, yeah, it’s about time.” The award recognizes all the ways Vongsay creates change. “It feels like a different kind of recognition,” she says. “It’s one thing to get a grant for a project, it’s another to get a grant that will allow you to be really bold with the work you do.”

Vongsay is one of 24 scholars to receive the fellowship, which comes with up to $100,000 over 12-24 months as they build skills and connections to drive large-scale change in communities. communities located in Minnesota, North Dakota or South Dakota. nations located within the geographical perimeter of these States.

During her fellowship, Vongsay plans to connect with other Southeast Asian playwrights in the diaspora, learning how other artists adapt, thrive, and are in community. She plans to connect with artists from places like Portland, San Jose and Fresno, and she will also visit Laos. She also plans to focus on communication, working with a coach to speak with legislators or other policy makers as she works to effect change. She hopes to strengthen her Lao language skills, which have receded over the years since she went to university. Eventually, she will write a one-act play entirely in Lao. “When older people come to see my plays, they don’t really understand because it’s in English,” she says. “If I wrote a play in my language, I would feel like I included my community.”

For Vongsay, being a leader is in harmony with her work as an artist. “I can’t separate being in the community from making art myself,” she says.

Hiding and writing plays in isolation is not appealing to the playwright. Often her job is to engage people and have multiple perspectives, experiences and stories that inform the work. “At the end of the day, all of my work is for the community,” she says. “That’s my target audience, especially Laotians and Southeast Asians. Everything I do is really for them, about them and with them.

From 1976 to 2010, the Bush Foundation distributed artist grants to artists in the Midwest, to support them in their work and contribution to the community. In 2010, the foundation ended the Artist Fellowship, along with its “sustainable vision” fellowship, announcing a shift in focus to awards that supported leaders who developed innovative solutions and advanced community change. . This year, two artists – Vongsay and Ifrah Monsour – received Bush Leadership Fellowships. Both playwrights and poets (Mansour also acts and creates visual arts, while Vongsay has also published a picture book), they are also refugees and active members of immigrant diasporas.

“The Bush Fellowship is truly an investment in their current and future leadership, not just in their own culturally specific communities, but across our region,” says Damon Shoholm, who directs the fellowship program at Bush. “We understand that they all bring specific talents and gifts with them, but we really invest in them as individuals who are their own level of organizers. They play a role in their communities to advance the stories of those who are often the most marginalized.

Artist leaders use their gifts to help bring home what our community can be, says Shoholm, as well as its struggles and beauty. “You have this gift that helps you articulate that, which I think is leadership in itself,” he says.

“To be an artist is to be a seeker of truth, and to be constantly in that place of finding inner balance about what it takes to speak that truth,” says Ifrah Mansour, another of this year’s Bush laureates. . Mansour has toured his one-man show, “How to Have Fun in a Civil War,” across the country, and has been featured in national museum exhibits, in addition to acting and creating in film productions.

“As an artist who is a builder, who is a storyteller, who embodies the work, who carries the work, I now feel the price of what it took me to interpret a traumatic story for five years”, said Mansour.

“I chose this passion that inherently positions me to be a vessel of pain and truth and to help others see that,” she says. “It’s a deep moment of realization of what I’ve chosen.”

Receiving the Bush Fellowship is a surreal feeling, Mansour says. She remembers a day several years ago riding her bike down Washington Avenue with 10 milk jugs she bought from a caribou near where she worked at a daycare. The milk jugs were for a project she was working on at the time. It was a time of being at a crossroads, Mansour recalls, of staying at a job that didn’t satisfy her or grabbing an exposure opportunity.

“It felt like a pivotal moment, where I felt like my mind was ready to bring this artistic passion to life no matter what.”

Now, Mansour says, she feels immense gratitude. “I know the toll, the trauma, the pain and the invisibility it took to get here,” she says. “It’s nice to be valued and to be seen.”