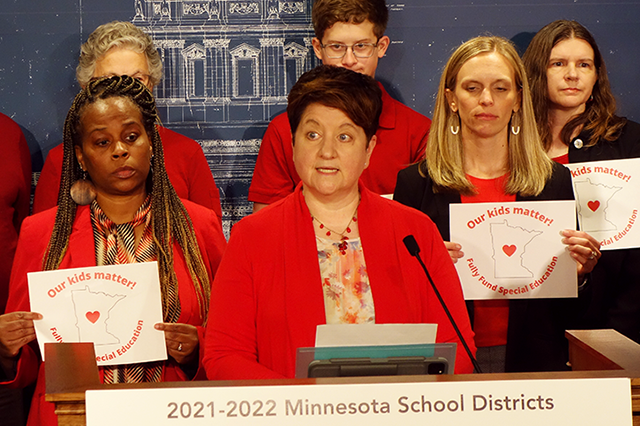 If the Minnesota Legislature ever meets in special session, and if the chairmen of the combat education committees ever decide to agree on spending a billion dollars of the surplus for schools, and if the other committee chairs reach agreement on their budget bills… it’s likely that school districts in the state will receive more money for special education.

Confused? Welcome to the world of education funding in the United States and Minnesota.

Special education is a mandatory service, and US public school districts are required to support students with physical, mental, and emotional disabilities. It’s not just for students who enroll in public schools; it must also be provided to students in private schools, charter schools, and home-schooled students.

But because it’s federally mandated — and because federal and state funding don’t actually cover the cost — districts transfer money from other budget areas to cover the cost. Thus, the cross-subsidy.

“Every school district in Minnesota has a cross-subsidy — not enough money in the special education account to cover services,” said Rochester Public School Board Vice Chair Cathy Nathan.

And when there isn’t enough money specifically for special education, it’s general education services that suffer. That, or districts are asking local property taxpayers for levies to increase funding.

“Public schools are required by law to provide free and appropriate education,” St. Paul School Superintendent Joe Gothard said earlier this month. “That means we can’t say no to any student who walks through our doors.”

When Congress imposed the mandate in the 1970s, there was a promise that federal money would cover 40% of the cost. But actual funding never came close to that, now falling in the 10-14% range, Gothard said.

This year, a coalition of school districts and advocacy groups asked the Legislature to spend $822 million of Minnesota’s $9.25 billion surplus to fill that void.

And in deals exchanged between House Education Chairman Jim Davnie and Senate Education Chairman Roger Chamberlain before the legislature adjourned earlier this week, each had money in their plans for education budget law to reduce the need for cross-subsidization. With an allocation of $1 billion from the surplus over three budget years, Chamberlain, R-Lino Lakes, offered $255 million in the first school year and $656 million over the next two school years.

“Educational organizations and advocates across the state consistently rank cutting cross-subsidies as their number one issue,” Chamberlain wrote in a letter that accompanied one of his offers. “This is because special education costs can be unpredictable and difficult to budget for, and because reducing cross-subsidization frees up local general funds that schools can apply to their particular needs (i.e. early years, school safety, student support staff, etc.).

Nathan said the $19 million cross-grant for special education at Rochester “could instead be used to fuel the innovation we need to meet the increasingly complex social and emotional needs of our students.”

Yet sending state money to districts to reduce the impact of cross-subsidization could also allow districts to reduce local property taxes. Mike Funk, superintendent of the Albert Lea School District, said the cross-subsidy of his $53 million budget is $3.1 million, which is comparable to what local ratepayers approved in a levy of $3.9 million.

“Not all communities can afford it, and it creates inequity for districts with higher special education costs and lower property values,” Funk said.

Matt Shaver, policy director of advocacy organization EdAllies, said it was not correct to think that special education students – who make up about 14% of public school students in the State – do not suffer from the effects of cross-subsidization. .

“What gets lost in this is that it focuses on dollars and cents when it’s really about people,” Shaver said. “Students with disabilities are primarily students in general education.

In fact, most special education students only spend part of their day receiving these services and the rest in regular classes.

Albert Lea’s Funk spoke of a severely disabled student who received a range of special aids including vision, deaf/hard of hearing, speech, language, physiotherapy, occupational therapy, physical education adaptive, writing and social work. Yet this same student was only separated from the general student population 20% of the time.

“The consequences suffered because general education funds are shifted to pay for special education services that result in increased class sizes, reduced elective courses, staff turnover, hit students with disabilities because that they are also general education students,” Shaver said. .

But if Senate GOP Leader Jeremy Miller doesn’t agree with Gov. Tim Walz and House Speaker Melissa Hortman to keep working toward deals and hold a special session later this spring to pass a series of budget and tax bills means “we have to deal with this for another year,” Shaver said.

Still, the cross-subsidy differences are only part of a larger disagreement between Chamberlain and Davnie, which involves the rest of the education allowance and the philosophy of who to offer it. Chamberlain favored funding for literacy programs and opposed specific allocations that come with specific requirements. Davnie wants more money for student mental health programs and a free lunch for all students, regardless of income; he also wants to see increased funding for school support workers.

“The impact of the pandemic, the economic instability that too many families have faced in recent years, the effect of social media and other issues have stressed too many students and created an unprecedented childhood,” said said Davie, DFL-Minneapolis. .

While the Senate’s version of an education budget bill included additional funds for mental health counseling in its offer, a gap remains between the two sides.