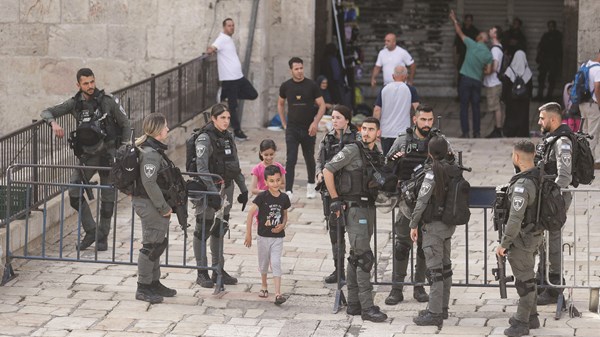 Israeli police clashed with Palestinians holed up inside Al-Aqsa Mosque yesterday, while international Middle East envoy Tor Wencesland called on Israelis and Palestinians to “show the utmost restraint “. “The message from the international community is clear: Avoid further escalation,” Wenesland said.
Yesterday, thousands of Israelis participating in the “flag march” entered the Old City of East Jerusalem occupied by Bab al-Amud, celebrating 55 years of occupation of the eastern part of it, a year after a bloody escalation with the Gaza Strip erupted after the “Quds Day” march.
This march, organized by the Israelis, angered the Palestinians, who seek to make East Jerusalem the capital of their future state.
The march began at 4 p.m. yesterday afternoon from West Jerusalem, amid a heavy security presence. The path of the march does not include the courtyard of Al-Aqsa.
Simultaneously with their arrival in Bab al-Amud, Israeli forces dispersed dozens of young men displaying Palestinian flags on Salah El-Din Street, hundreds of meters away.
The Palestinian Red Crescent Society confirmed that around “40 wounded, at least, were recorded in the vicinity and inside the Old City” during the clashes, 15 of whom were taken to hospital. The “Red Crescent” confirmed that the Israeli police “assaulted our crews in the vicinity of Bab al-Amud”.
On the other hand, he said his crews in Ramallah and Nablus in the West Bank faced around 60 injuries in protests rejecting the flag march and clashes with Israeli security forces. Palestinians took to the streets in several areas of the occupied West Bank and carried Palestinian flags. The Jordanian Foreign Ministry condemned ‘allowing extremists and a member of the Israeli Knesset to storm the blessed Al-Aqsa Mosque’, saying it ‘was done under the protection of the Israeli police’ , and warned of the worsening of the situation. the situation in light of the authorization of the march in occupied Jerusalem.
Yesterday, the Jordanian news agency, Petra, quoted the ministry’s spokesman, Haitham Abu Al-Foul, as saying that “the incursions and provocative actions of the extremists are a violation of the historical and legal status quo and of international law “.
He pointed out that “the blessed Al-Aqsa Mosque, the Holy Al-Haram Al-Sharif, with its entire area of ​​144 dunums, is a place of worship purely for Muslims, and that the Endowment Department of Al-Quds and the Blessed Al-Aqsa Mosque Affairs in Jordan is the legal entity with exclusive jurisdiction to manage campus affairs and regulate access to it.”
The spokesperson called on “Israel to end all practices and violations against the holy Al-Aqsa Mosque and to respect its sanctity”, stressing the need to stop all measures aimed at changing the historical and legal status quo , and to respect the authority of the Jerusalem Endowment Administration and the affairs of the Blessed Al-Aqsa Mosque.
Israel recognizes the Kingdom’s supervision and guardianship of the Islamic holy sites in Jerusalem, which, like other cities in the West Bank, was under Jordanian sovereignty before being occupied by the Jewish state in 1967. Israel and the occupied West Bank have experienced tensions and clashes since the end of March.
Hours before the scheduled start of the march, police prevented some Palestinians from leaving Al-Aqsa Mosque as Jewish pilgrims arrived at the compound.
Palestinians threw stones and fired fireworks at police, who responded with stun grenades.
Frequent clashes erupted between Palestinians and Israeli police at the Al-Aqsa Mosque last April, during the month of Ramadan, as Palestinians resented the increase in Jewish visitors to the mosque. The “March of the Flags” in Jerusalem raises fears of a new escalation between Israelis and Palestinians.
Yesterday morning, the situation appeared tense in the Old City of Jerusalem, as security forces were widely deployed at various points in East Jerusalem, hours before the march.
Jews are allowed to enter Al-Aqsa courtyard but are forbidden to pray there, but increasing numbers of Jews secretly go there to pray, sparking tension and Palestinian condemnation .
And the Israel Police say that “a small group of rioters holed up inside the mosque, and threw large stones at the Israeli police force”, adding that they were “operating on the spot”. , without further details.
In the Muslim Quarter of the Old City, most businesses closed and residents did not come out into the streets. Israeli police said they deployed 3,000 troops to accompany the march.