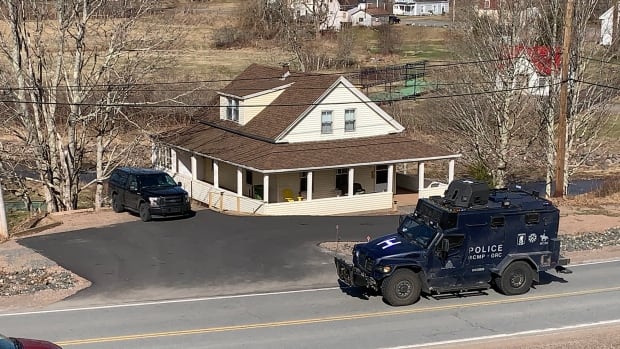 The public inquiry documents highlight internal discussions RCMP officers had about what information they should share with the public about the current active shooter situation in Nova Scotia in 2020.

They also show that on April 19, upon realizing the shooter was loose and on the move, an RCMP communications officer became concerned for her own safety and that of a CBC crew stationed near the makeshift command post in Great Village, Nova Scotia.

The families of those murdered on the second day of the violence were adamant that had they known more about the danger – and the shooter was driving what looked like an RCMP cruiser – their loved ones would have been home and out of danger.

During a 13-hour rampage that ended with 22 dead, others injured and several homes destroyed, Nova Scotia RCMP posted 11 tweets about the incident and shared similar information on their page. Facebook.

The Mass Casualty Commission has yet to release its summary of RCMP public communications, but records released to date show that there have been behind-the-scenes deliberations about details specific enough to share with the public and that a communications team has been tasked with posting messages on social media. media.

Records released by the commission show that within the first hour of response, several police officers asked about the steps taken to inform the public.

const. Stuart Beselt, the first officer on the scene in Portapique, Nova Scotia, radioed his colleagues for the possibility of an emergency broadcast at 11:16 p.m.

Staff from the operational communications center began calling residents to warn them to stay indoors. To do this, they had to search for addresses and maps to try to locate phone numbers in their internal registration systems.

Cpl. Lisa Croteau told commission investigators that Sgt. Andy O’Brien called her around 11:30 p.m. – about 90 minutes after the first 911 call – and asked her to tweet out information about an ongoing situation in Portapique, Nova Scotia. After discussing what needed to be communicated, Croteau said she reviewed the translated pre-wording.

She posted that the RCMP responding to firearms complaint at 11:32 p.m. and advised people to avoid three streets in the community and stay at home with the doors locked. He did not mention that people had been killed or injured.

That was the last time Nova Scotia RCMP tweeted until 8:02 a.m. the next morning, when they wrote that officers remained in Portapique to respond to an active shooter situation.

Information about Gabriel Wortman’s marked cruiser was shared with other police departments around this time, but it was not made public for two hours.

This Sunday morning, news agencies were sharing information that the RCMP had posted on Twitter and Facebook.

CBC producer Angela MacIvor emailed the two media liaisons for information at 2:57 a.m. after seeing social media posts and the gun tweet before midnight. Shortly after, she called Croteau, who told the inquest she was still home and dozed off after speaking with O’Brien.

Croteau told her she had no information about the fires or the number of officers on the scene, but said residents should go to their basements and lock their doors or leave the area.

Croteau told the inquest that she had planned around 5 a.m. to go to Colchester County at the request of the staff sergeant. Steve Halliday, who asked him to be there to handle media requests at the scene.

Soon after, she was receiving a steady stream of calls from news agencies, including some outside Canada.

“I didn’t want to know too much”

After arriving at the makeshift command post at the Great Village Fire Station, Croteau spoke to the incident commander, Staff Sgt. Jeff West, for information she was able to share with the media.

She told the inquest she knew they had a suspect but did not press for further details in case she leaked something she was not authorized to share.

“I watched it because I didn’t want to know too much because I wanted to be able to help the media,” Croteau said in his interview with the commission.

Meanwhile, a CBC reporter and videographer arrived, and Croteau helped them move to a place where they had a good view of the command post. All three were there when police vehicles rushed in, responding to the 911 call that Lillian Campbell had been killed on the road in Wentworth.

After learning of Wentworth’s call and that the suspect was in a police cruiser, Croteau said she became concerned and called a colleague who told her she was a “sitting duck”.

“I didn’t feel safe for myself or for the CBC reporters where we were located because if he came around the corner and we were there,” she told the commission. .

After the RCMP released the tweet about the cruiser replica, they told the CBC team to move to a safer location. Croteau decided to return to headquarters to help there, in part because she feared her own cruiser would make her a target for officers searching for the shooter.

“I was afraid they’d think I was the bad guy. So I just had to… I had to get out of there,” she said, describing a chilling return to Halifax around the same time the shooter was heading. along the same route.

CBC this week asked the RCMP to comment on why it did not provide more information to the crew that morning, such as the fact that several people had been killed, to convey the seriousness of the situation. In an emailed statement, the RCMP said it would be inappropriate to comment on investigative documents while proceedings are ongoing.

Behind the scenes on Sunday morning, there were discussions about what information should be made public. Croteau’s colleagues on the communications team liaised with the commanders.

Staff Sgt. Addie MacCallum was in contact with Lia Scanlan, the civilian director of communications for the RCMP, who oversaw the social media posts. They first spoke at around 7:45 a.m., after which she sent a tweet saying the shooter was still active, according to the investigation.

const. Heidi Stevenson also contacted the operational communications center at 8:44 a.m., asking if a press release had been considered.

Halliday approved a tweet mentioning the cruiser at 9:49 a.m., the investigation found. The message was not posted for almost half an hour, although the commission’s report on commanders’ decisions does not explain why.

I wanted to exclude that the car was burned

Halliday, who has since retired, told the inquest he asked MacCallum before 8 a.m. to work with Scanlan to send the information about the replica cruiser.

Halliday testified Tuesday that prior to this point and until officers ruled out the possibility that the replica cruiser was burned at Portapique, it made no sense to share details.

“Releasing it sooner than it might have made an even more difficult situation for our members to handle at that time…I don’t think I would have seen this come out before it was literally confirmed that it was not. It wasn’t one of those vehicles that burned at the scene,” he said.

Just last week, an expert hired by the commission warned against this very approach.

“Where you wait and wait for perfect situational awareness and you fail to tell the public what they need to know right now. And I’m sorry if I’m wrong, I’ll tell you I’m wrong and I’ll correct But waiting for this perfection of information, it does not happen,” he said.

Things have changed quickly in the last hour

Croteau remained the media point of contact during the last hour of the rampage and her information was listed in the single press release – sent to around 300 journalists – which said the situation was “active and evolving” and that people had to stay inside with the doors locked.

He said the RCMP strives “to provide the most up-to-date information while ensuring public and officer safety.”

Halliday’s notes indicated that Staff Sgt. Dan MacGillivray – then critical incident commander – was “updating communications in real time so they had updates of what was going on to inform the public”.

Commanders sifted through information from tips and the many officers in pursuit.

In retrospect, several of the tweets were out of date when they were posted. For example, a tweet about the suspect spotted in Milford in a gray SUV was sent minutes before two RCMP officers spotted the shooter in another vehicle at a gas station in Enfield, Nova Scotia.

After shooting him, the RCMP tweeted that their suspect was in custody and later that day the force confirmed he was dead.