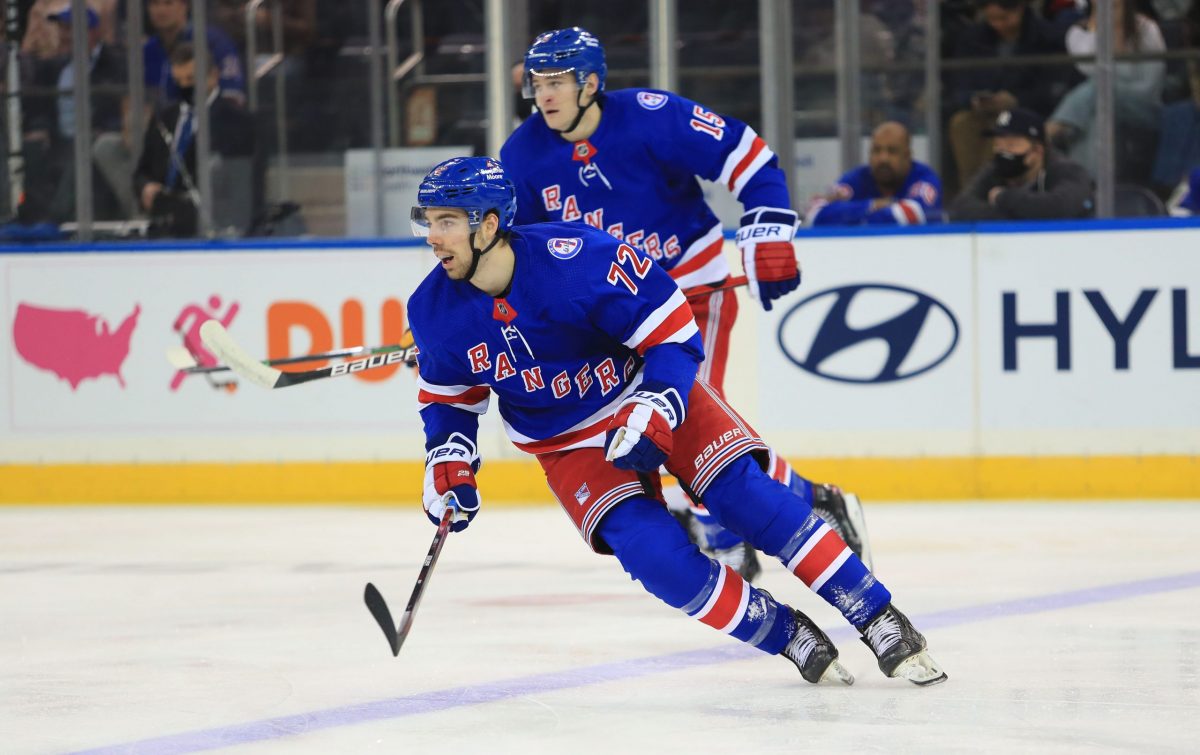 The New York Rangers organization is desperately lacking centers. Mika Zibanejad, who signed on in October for the next 8 seasons is the shining lone star down the middle. Ryan Strome will be a pending UFA, and although he won’t be moved at this trade deadline his future remains uncertain.

When it comes to prospects, the Rangers don’t have anything significant in the pipeline ready to help. Matter of fact, the only promising pivot is Ryder Korczak, whom the Rangers selected in the third round of the 2021 draft. But he is still years away from making the team.

That prompts the question, is Filip Chytil an untouchable for the Blueshirts?

Filip Chytil and his Rangers future

Chytil, 22, was selected by the Rangers in the 2017 NHL Draft in the first round (21st overall). He was a gamble as most rankings had him as a second round pick. Since debuting later that season, he’s bounced between center and wing finding difficulty getting comfortable.

His talent with the puck and physical stature (6-2, 206) only makes Chytil a more frustrating figure. Over the course of his young career, he’s had several gorgeous goals that highlight his slick stick handling abilities. Yet here we are, just over four years and 226 games later waiting for him to put it all together.

In his career, Chytil has amassed 83 points. His best offensive numbers came last season where he posted a .52 points per game average. Unfortunately, he’s only scoring at .30 points per game this year, which is a significant decline for a young player.

The Rangers need more but despite his low production the Rangers may be unwilling to move him because he’s a center.

President-general manager Chris Drury does not want to trade him. But Chytil needs to give him reasons beyond his youth — and the fact that the organization is bereft of young centers — not to do so.

That brings us back to the question: Is Chytil an untouchable?

For me, the answer is clearly a big NO.

I, and many others have lobbied that Chytil’s future is likely best suited as a winger. The fact that he wants to play center means nothing since he struggles to distribute the puck and win face-offs.

Of his 83 points, 53% of them come via assists. Breaking it down further 18 of his 44 assists are secondary helpers per Natural Stat Trick. In fairness, Zibanejad’s goals to assist ratio is 55%, but Chytil just doesn’t seem to have the vision and puck distribution skills to play center.

The Rangers are really doing all they can to keep Chytil in the middle and seeing if he can breakout. They’re doing so despite needing help at right wing, a position he can play which he did with Artemi Panarin and Strome at times this season.

But to think he’s untouchable or not wanting to trade him because you don’t have centers isn’t enough for me.

Not when Barclay Goodrow could easily take the reins as an effective third-line pivot. Or maybe give another big kid a shot in Morgan Barron?

The bottom-line, if Chytil is the centerpiece to bring in a top six winger for the playoffs, Chris Drury shouldn’t even blink.

Catch up on the latest trade rumors including Senators set to sell at the deadline. Plus, is Alexandar Georgiev on the move, and more.