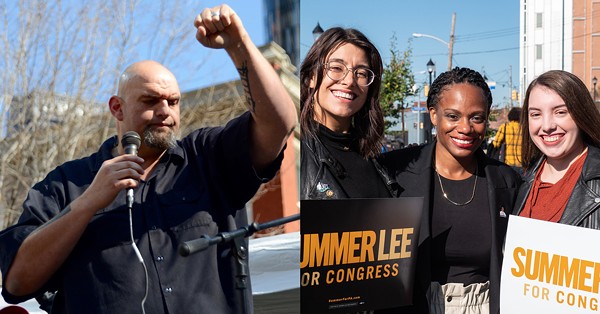 John Fetterman and Summer Lee are both running for U.S. Congressional seats in Pennsylvania. And both won their primaries despite fierce opposition from the centrist establishment.

Last Tuesday, a slate of primary elections were held in Pennsylvania and North Carolina, critical national battleground states, as well as Oregon, Idaho and Kentucky.

For progressives, it was a good day. They scored key victories in Pennsylvania, Kentucky and more. But Tuesday also highlighted some troubling trends on the horizon — including MAGA’s continued electoral capture of the Republican Party and the extent to which the pro-Israel government lobby will go to defeat the progressives.

Here are some of the main titles.

Lieutenant Governor John Fetterman won his Democratic Senate primary, doing so from a hospital room while recovering from a stroke brought on by atrial fibrillation. He had a pacemaker placed earlier in the day.

More importantly, Fetterman beat Rep. Conor Lamb, the centrist archetype who was endorsed by Sen. Joe Manchin. Fetterman, who campaigns in Carhartt hoodies and athletic shorts, supports Medicare for All, women’s right to choose, and union rights (though I disagree with some of his environmental stances — he opposes bans on hydraulic fracturing). His victory represents a significant adjustment to the arguments the centrists have made about how to win over blue-collar voters across the country. Rather than strictly coding political positions as “too left,” voters respond to who politicians say they implicitly represent in the way they present themselves. In short, vibrations matter. And John Fetterman is an unassuming man.

Fetterman offers an important counterpoint to the likes of James Carville and other centrist talking heads who argue that voter rejection of Democratic politicians at the polls is about their progressive policy positions. Rather, it is a reminder that voters elect politicians to do something. And the Conor Lamb-Joe Manchin wing of the party has too often put the interests of its corporate donors ahead of achieving the policy goals they ostensibly support, whether it’s climate action, paid family leave , universal child care or student debt relief.

Meanwhile, in Pittsburgh, Summer Lee — a 34-year-old progressive Justice Democrat-backed organizer who was the first black woman to represent Southwestern Pennsylvania in the state legislature — won a primary victory for US House despite massive outside spending by pro-Israel super PACS to smear it. More on that later.

Cawthorn was one of the worst MAGA-lomaniacs in Congress. It’s a good thing for our democracy that he lost his seat. But the way he lost it is an indictment of the modern GOP.

The Democratic Majority for Israel, which spent millions of dollars to mount a special off-cycle campaign by prominent Bernie Sanders surrogate and former Ohio State Sen. Nina Turner, again wavered in races across the country. They spent $2.3 million trying to defeat Summer Lee in Pennsylvania, as well as $2 million on Durham County Commissioner Nida Allam’s campaign for Congress in North Carolina. They weren’t alone. Another pro-Israel super PAC, the United Democracy Project, has spent millions more.

Rather than specifically targeting these progressive young women of color over their positions on Palestinian rights, they either ran ads supporting opponents or vilified them as being not democratic enough.

In Lee’s run, those Super PACs accounted for 75% of the spending supporting his opponent, former Republican Senate staffer Steve Irwin. The ad campaign was so effective that it took him from 29 points to a few hundred votes from victory on election day.

What emerges is that the pro-Israel group sees the progressive candidates as a deadly threat to the longstanding bipartisan consensus on Israel. And they spend millions of dollars trying to defeat them.

Pro-pharma Democrat Kurt Schrader is on the ropes

With the race still too close to announce, Rep. Kurt Schrader, the Democratic congressman who led efforts to destroy Democrats’ prescription drug reform, may be about to leave. This is despite receiving tons of pharmaceutical donations and a $300,000 publicity blitz from a dark-money pharmaceutical lobby group before Election Day.

It’s a reminder that you probably shouldn’t try to keep your constituents’ prescription drug costs high in exchange for campaign money from an industry – or at least you shouldn’t be so brazen about it. topic (considering how many politicians on both sides of the aisle take this kind of funding every cycle).

Perhaps the most depressing scenario of the entire midterm is the role the twice-deposed insurgent former president continues to play in his party’s future. Perhaps the most surprising outcome of all was the Pennsylvania Republican gubernatorial primary victory of Doug Mastriano, Donald Trump’s endorsee who was on Capitol Hill on Jan. 6. Mastriano compared Democrats to Nazis for opposing abortion rights.

In the GOP Senate primary, the race remains too close to call and will continue with a recount. Although Dr. Mehmet Oz – the Trump-sponsored nominee – has a narrow margin over the more traditional (although many MAGA) former hedge fund manager David McCormick, Oz hasn’t been helped by the commentator’s late rise. ultra-MAGA Kathy Barnette, who claimed that “MAGA does not belong to President Trump”.

The idea that the Donald Trump-endorsed candidate could lose solely because he split the votes with an even more extreme candidate than Trump does not bode well for a GOP that aims to be a legitimate governing partner in the coming.

Notably, Pennsylvania Democrats are pressing their tactical advantage. Democratic gubernatorial candidate Josh Shapiro’s team ran ads that, while promoting Shapiro, tried to tie Mastriano specifically to Trump, negotiating that the MAGA their opponent would be in the November general election, the more it would be easy to beat them. Let’s hope this bet pays off.

Originally published May 19 in The Incision. Get more at abdulelsayed.substack.com.