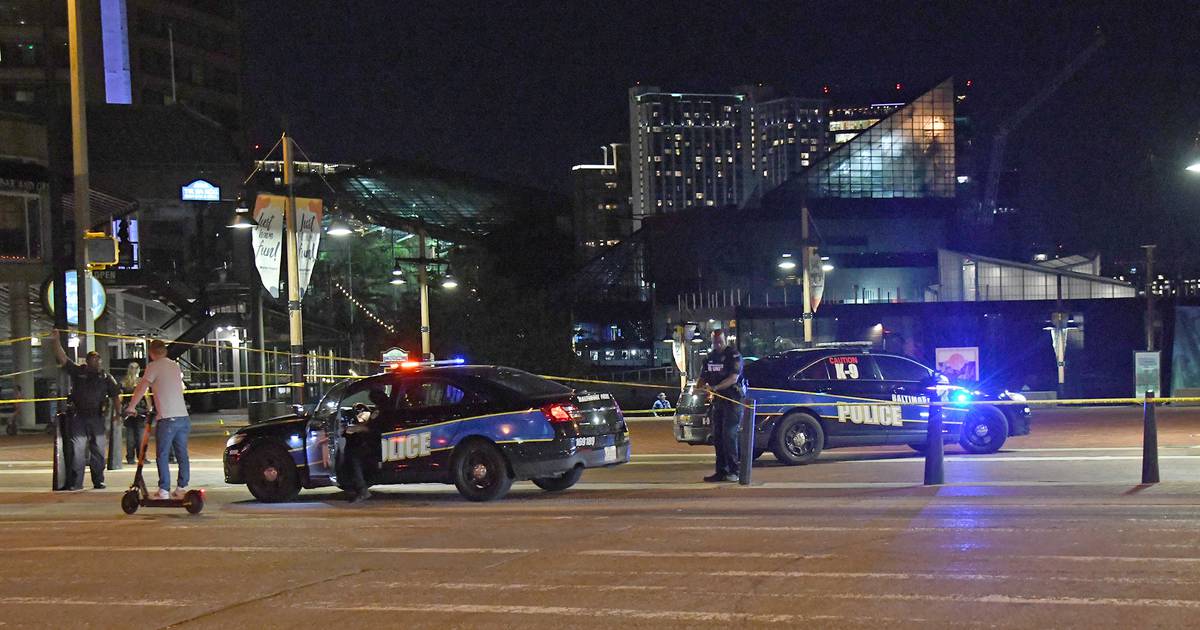 On a busy Saturday night at the Inner Harbor over Memorial Day weekend, throngs of people enjoying a warm evening downtown began running frantically for cover after gunfire rang out sounded in the amphitheater area along the seafront promenade.

Two teenage victims were hospitalized and one later died, police said. They were both 17, a boy who was pronounced dead and a girl who was in stable condition hours after the shooting, according to Baltimore police. The violence continued as two more men were killed in a triple shootout later Saturday night, and a woman was fatally shot early Sunday.

The double shooting in Inner Harbor was reported around 7:35 p.m. in the 300 block of East Pratt Street. Casings were visible scattered around the brick amphitheater. Police quickly cordoned off the area with yellow tape crisscrossing the walkway which would usually be crowded with tourists and families.

Speaking at the scene Saturday night, Baltimore Police Commissioner Michael Harrison said officers working downtown heard the gunshots and ran towards them, located the victims within seconds and started to help.

He said the shooting followed some sort of confrontation in the area and one or more suspects fired. “It is unclear if either victim was targeted,” he said. Police were also unsure whether the two victims were together or had a connection other than being in the area when the confrontation unfolded.

The shooter or shooters fled the scene and remained on the run late Saturday night, Harrison said.

“Once again, it’s an unnecessary tragedy that has happened. It’s about young people carrying guns and using them in crowds,” Harrison said. have a complete disregard for human life and a total disrespect for law enforcement. … It’s not only shocking but frustrating and annoying.

Harrison said about 20 Baltimore police officers were in the area when the shooting unfolded, as part of a Memorial Day weekend deployment strategy that will continue through Monday. But the commissioner also noted that more officers alone would not be enough to stop gun violence, as Saturday night’s shooting demonstrated.

“It’s about them doing this in front of the police,” he said. “So it’s a bigger conversation than deployment.”

Three other people were shot dead in the city from Saturday evening to Sunday morning. A triple shooting in the Barclay neighborhood of South Baltimore killed a 31-year-old man and a man whose age is unknown. Officers arrived around 10:50 p.m. at the 400 block of North East Avenue and found two men inside a car – the unidentified man who died at the scene and a 35-year-old man who received a shot in the leg and taken to hospital. . The 31-year-old man was nearby and was pronounced dead at Johns Hopkins Hospital.

MTA police found a woman early Sunday morning who died from gunshot wounds inside a car in the Fairfield area of ​​south Baltimore. Baltimore paramedics arrived around 5:20 a.m. at the 3400 block of South Hanover Street and pronounced the woman dead at the scene.

“I am sickened that this plague continues to grip our city,” Mayor Brandon Scott said in a statement after the 17-year-old’s death. “I will continue to push every public safety agency to do more, but it will also require all of us to collectively say enough is enough, that we are not going to condone or allow violence in our city. The mission to build a safer Baltimore demands that we all lean in because the stakes are too high and the need too urgent. »

The shooting in Inner Harbor came as organizers of a festival celebrating Indian culture cleaned and dismantled their gear after hours of rejoicing at McKeldin Plaza, just across Light Street from the port. The Hare Krishna festival was over but several organizers were still in the area when the shots rang out.

A man said he heard the shots, looked up and saw a man with a gun. He said the shooter then pulled up his hood, climbed onto a dirt bike and drove away.

“People hit the bridge, some with young children, just hit the ground. Others were running,” the man said. He asked to remain anonymous out of concern for his safety.

Be informed of the latest news as it happens and informed about other must-see content with our free news alerts.

Police said investigators are still working to determine if the person fled on foot or via some sort of motorized vehicle.

“It’s getting out of control,” the witness said, adding that a family member had recently been the victim of a carjacking.

Another young woman, who identified herself as Lily, said she and her friends were sitting by the water when the shooting started right in front of them. After quickly realizing it wasn’t fireworks, they headed east on Pratt Street, she said.

Police kept the area cordoned off for hours on Saturday evening as crowds of people walked past the crime tape, some wondering aloud what was going on. Parents watched their children to make sure they didn’t accidentally stumble upon the crime scene. Couples dressed for dinner walked by holding hands and carrying leftovers. Children on dirt bikes sped through traffic.

Harrison said police knew many people witnessed the shooting, and he called on them to come forward and help detectives solve the case.

“We are counting on you,” he said.

Anyone with information relevant to this incident is asked to call detectives at 410-396-2411 or call Metro Crime Stoppers at 1-866-7lockup. Anyone with information about the fatal shootings in the Fairfield area or the Barclay neighborhood is asked to call 410-396-2100 or Metro Crime Stoppers at 1-866-7Lockup.