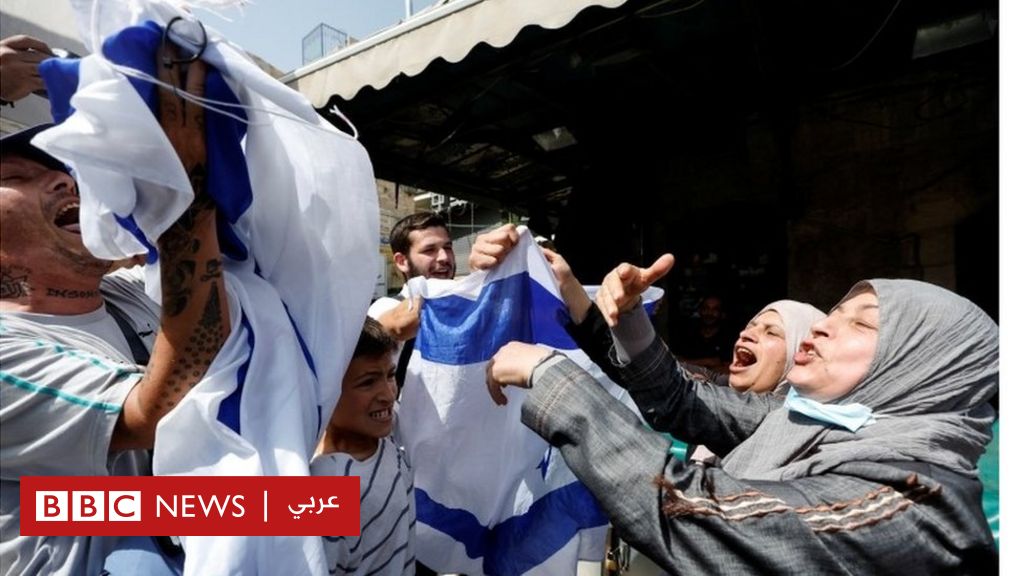 Thousands of Jewish nationalists have begun a controversial annual flag march that will roam the streets and alleys of occupied East Jerusalem’s Old City.

The march will enter the Old City from Bab al-Amud and Hebron, then gather at the Western Wall Plaza, which Jews call the Western Wall, where participants will commemorate the memory of Israel’s control of Jerusalem after its occupation of Jerusalem. -Is during the war of June 1967.

The Islamic Times in Jerusalem said 1,044 Jews, including settlers from the occupied West Bank, entered the mosque’s courtyards before noon on Sunday.

The Palestinian presidency accused Israel of “extreme recklessness” in allowing settlers to storm the mosque.

However, Israeli Prime Minister Naftali Bennett told the weekly mini-ministerial meeting that the march will proceed along the planned route and that raising the Israeli flag in Jerusalem is a “natural right”.

Bennett added that “Jerusalem will never be divided.”

The Palestinian Foreign Minister’s political adviser, Ahmed al-Deek, replied that Bennett’s statements regarding Jerusalem “constitute a perseverance on the part of the head of the political hierarchy in Israel to continue his open war against Jerusalem, its citizens and its sacred places in the worst forms of colonialism and racism.”

Hamas, which controls the Gaza Strip, said sovereignty over Al-Aqsa Mosque “will remain purely Palestinian”, and any Israeli attempts to control it are “lost illusions and calculations”.

Israel deployed hundreds of police forces to the Bab al-Amud neighborhood, which leads to the Old City of East Jerusalem, to secure the arrival of the flag march, organized by far-right Jews, in the region.

Israeli police closed all roads leading to Bab al-Amud and allowed entry only to residents of the Old City. All shops in the Old Town were also closed, despite shopkeepers’ dissatisfaction with the closure decisions.

Israeli forces detained dozens of Palestinian worshipers inside the al-Qibli prayer hall and closed the doors with chains and locks. She said she took the step to “avoid friction” between intruders in the chapel and intruding Jews.

Video footage showed Palestinians trapped inside the prayer hall throwing chairs and other objects out the windows at Israeli police.

Reports indicate that Israeli police arrested 13 Palestinians who were in the Al-Aqsa Mosque and a number of others during clashes that broke out near the Bab Al-Amoud area.

Among them was far-right MK Itamar Ben Gvir, who stormed the courtyard of the mosque, accompanied by a number of settlers, guarded by Israeli police.

Jews performed Talmudic rituals when entering Al-Aqsa from the eastern side of the Haram courtyards and past the Bab al-Rahma Chapel and the Dome of the Rock, before leaving the plazas on the Mughrabi Gate side, according to this which showed video clips from inside the courtyards of the mosque.

The Palestinian Ministry of Foreign Affairs and Expatriates has condemned the storming of Al-Aqsa Mosque squares. He called on the international community and the US administration to “break their silence and assume their legal and moral responsibilities towards Jerusalem and its holy places, to respect their declared positions and translate them into practical measures and to put pressure on Israel to that he put an end to the persecution of Al-Aqsa Mosque.”

Hamas said in an official press release that “Israeli forces preventing Palestinian worshipers from reaching Al-Aqsa Mosque and suppressing them and attacking the Almoravids who were present inside will not give it any so-called sovereignty over one centimeter from the mosque, which will remain purely Islamic.”

The leader of the Islamic Jihad Movement, Khader Adnan, confirmed on Sunday that what is needed is “more than an Intifada to deal with the Al-Aqsa Mosque incursion”, and warned that “reversing this what happens there gives the occupation a decision to destroy it and blow it up.”

The preacher of Al-Aqsa Mosque, Sheikh Ikrima Sabri, had called on “every Palestinian to do their best to reach the mosque by all means”, and declared that “we must mobilize to face the incursions of the settlers in courtyards of the mosque. .”

The Palestinian presidency warned on Saturday of the consequences of allowing the flag march to take place in the city of Jerusalem.

The Fatah movement called for “confronting the march and the ribat in the Al-Aqsa Mosque, and intensifying the raising of Palestinian flags in the alleys and streets of the old city”.

She said: “The sight of raising the Palestinian flag has become a knot for Israelis, as it expresses Palestinian sovereignty over the occupied city.

The organizers of the flag march had asked the Israeli authorities to allow them to enter the courtyards of the Al-Aqsa Mosque, but they did not accept their request to enter the mosque complex, which is considered a hotspot.

Israel sees Jerusalem, along with its western and eastern parts, as its “united eternal capital”, while the Palestinians want East Jerusalem to be the capital of a state they aspire to establish in the currently stalled peace process.

The clashes that took place in Jerusalem last year in the run-up to this occasion led to the outbreak of an 11-day military conflict that began with Hamas firing rockets into Israel in response to the seizure of attack on Al-Aqsa Mosque by Jewish extremists. The Israeli army responded with devastating airstrikes.

This war resulted in the death of 260 Palestinians, including 66 children, while on the Israeli side, 14 people were killed, including one child.

In Gaza, a massive march was launched in Khan Yunis, in the besieged southern Gaza Strip, where participants raised Palestinian flags and condemned the onslaught of extremist Jews in the courtyards of Al-Aqsa Mosque.

On Friday, the United Nations special envoy for the Middle East peace process, Tor Wencesland, called on “all parties to show maximum restraint in order to avoid another violent conflict which will only more casualties.”

“The message from the international community is clear, it’s about avoiding such an escalation,” he said.