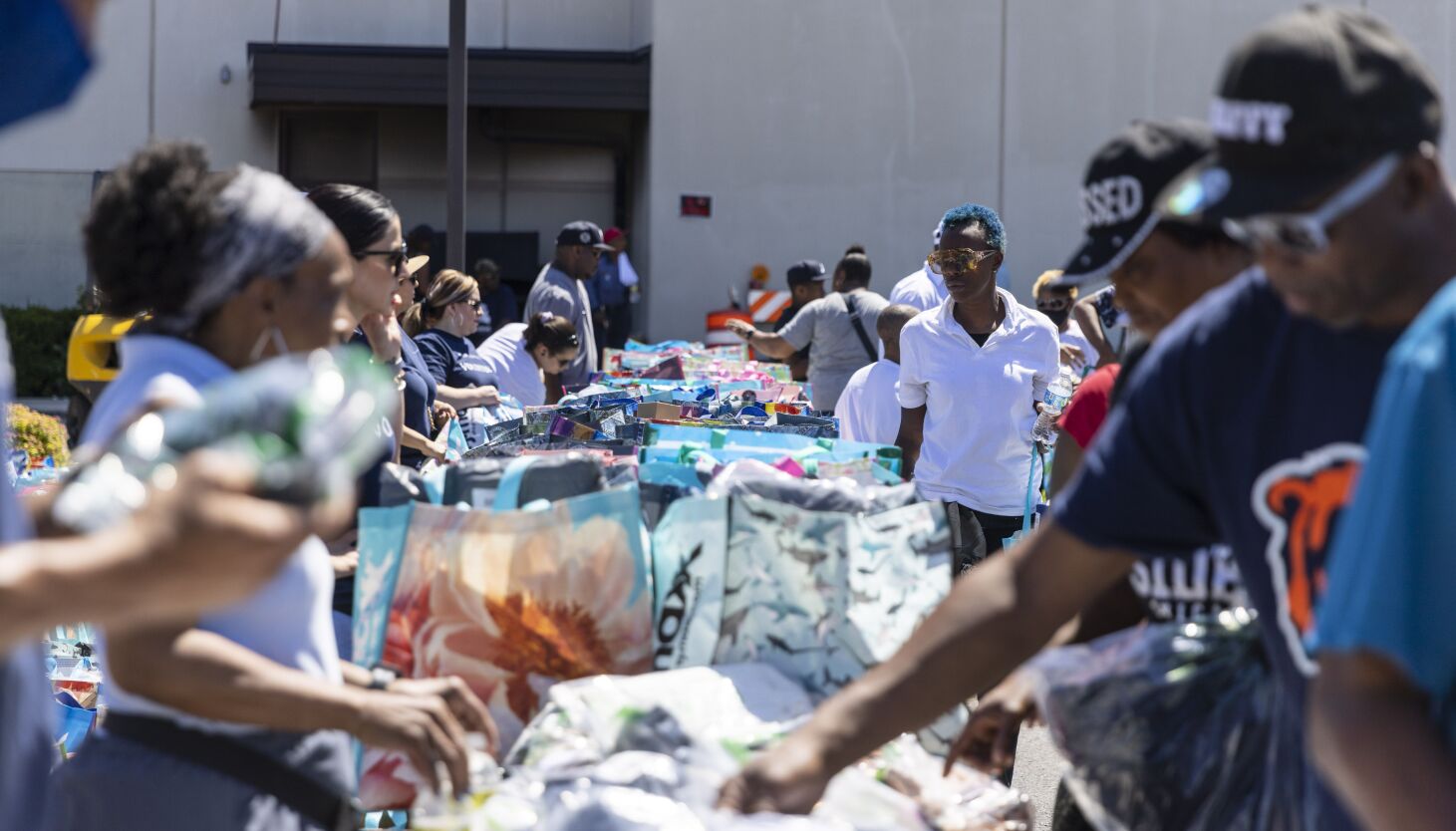 Standing in line to enter the auditorium of Mt. Vernon Baptist Church in East Garfield Park, a woman spoke about what she hoped to receive in a drawing at the church on Monday.

An ice maker, said a woman, sweating in the heat. “I’m going to sit next to it and eat ice cream all day,” she said.

The ones she found available online at $90 were overpriced, but the chance to win the item in a raffle was worth the wait in the sun. That could come in handy in case she gets her snow cone project off the ground, she added.

She was one of hundreds of people at the church, at 2622 W Jackson Blvd, to try their luck in drawing and see what was available at a giveaway held in Juneteenth’s honor. Other items available ranged from superman bikes and slippers to handbags and ceiling fans.

The $1.2 million in available goods was contributed by CityServe West Cook, the local branch of CityServe, an international non-profit organization. This was CityServe West Cook’s inaugural event. Local faith leaders and politicians, including Rep. Danny Davis (D-Ill.), explained at the event that CityServe would continue to “bless the community” with giveaways like the one held Monday.

Latoya Wilson of East Garfield Park, 40, hoped some more basic needs would be met. Wilson wanted a big box of diapers for her baby. She said she typically spends $60 to $70 for a box of 95 diapers and would use the money saved from the gift to fill up her gas tank.

Or the money could cover utilities. “Running the AC all day because of the heat drives up your bill,” she said.

Crissy Cochran, executive director of communications for CityServe International, said Mount Vernon Baptist had proposed June 19 as the launch day for the local wing of CityServe. “It was the perfect opportunity to commemorate June 19 and what it meant to the neighborhood’s African-American community,” Cochran said of the holiday that commemorates the freedom of Texas’ last remaining slaves on June 19, 1865.

CityServe West Cook plans to hold another contest in July and one every month, Cochran said. They also plan to hold smaller, more frequent giveaways at local churches, and 20 churches have already signed up to be local distribution points.

Not every big ticket was to be won. Some you could just take home, no questions asked. Tasha Brown, 62, stood in the parking lot with her brand new folding awning tent. Brown had hoped for a patio set but was satisfied with the canopy. “Just in time for the 4th of July,” she smiles.

Felicia Morgan, 60, was there with four of her grandchildren. For her, it was about saving money so she could help her granddaughter, who is starting Loyola this fall. Morgan said they have already paid for her tuition and school materials, but are still a few hundred short of housing costs. She urged the eldest of the four to find shoes for himself from the boxes laid out and then find more for his younger siblings.

In addition to the items available during the contest, bags of mixed goods were also available to participants.

Wilson pulled a shoebox-sized package from the bag and lifted it above his head in triumph. He was a muscle massager. “I need it for my back,” she said.