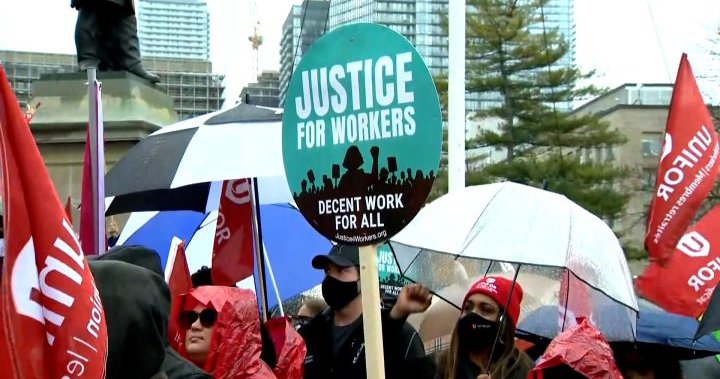 Workers descended on Queen’s Park on Sunday for a May Day rally, one of 20 such protests held across the province.

The event was organized by the Ontario Federation of Labor as part of a campaign to get its worker-focused agenda high on political party agendas ahead of the June 2 election in Ontario.

“We are advancing our vision for the Ontario we need and mobilizing to win it,” Patty Coates, president of the Ontario Federation of Labour, said in a statement.

May 1 is International Workers’ Day, although Labor Day is officially celebrated in Canada in September.

The Ontario Federation of Labor is calling for a minimum wage of $20, affordable housing and paid sick leave, among other things.

Workers who took part in the action at Queen’s Park included healthcare workers, climate activists, injured workers and students, according to the federation.

Attendees huddled under umbrellas and held signs, while listening to a series of speeches by lawyers.

“Today we are making sure our message is heard loud and clear: It’s time for a government that puts workers first,” Coates said.