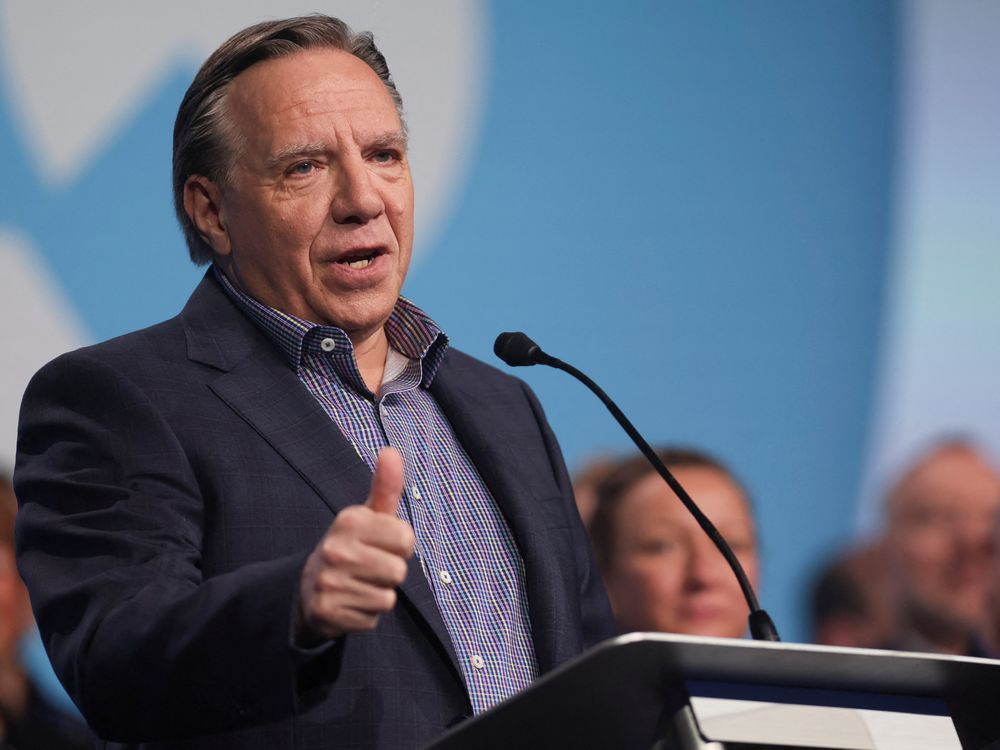 DRUMMONDVILLE — Premier Francois Legault says Ottawa ceding more powers over immigration to Quebec is a “question of survival” for the Quebec nation.

And arguing that stability is important in times of economic turbulence, Legault urged Quebecers to think twice before voting for other political parties this fall.

“Now is not the time to entrust left or right ideologues” from the political spectrum, he said on Sunday, without naming any of his rivals by name.

Legault made the comments in a speech to 1,200 Coalition Avenir Québec delegates gathered for a two-day political convention, the last before the fall general election. He gave his speech on a stage surrounded by many CAQ candidates, including incumbents.

The speech capped a weekend focused on the theme of Quebec pride, with Legault highlighting related actions his government has taken over the past four years, including passing controversial laws such as Bill 21 on the secularism of the state and Bill 96, recasting the Charter of the French language.

“Yes, the pandemic has prevented us from fulfilling some of our (election) commitments,” Legault told the crowd, who clapped thunder and cheered throughout his speech. “But we still changed Quebec.

“I think Quebecers are more proud to be Quebecers today than they were in 2018. The question we have to ask ourselves in the months to come is this: do we want to break this momentum of change, or will we continue?

Rolling the stability card, Legault ran through the list of threats: inflation, war in Ukraine and a possible global recession. Parties that think “money grows on trees” don’t compare to the CAQ’s team of economy ministers, he said.

The government has helped Quebecers deal with inflation in the past and will do so again, Legault said.

In the last provincial budget, the government gave a check for $500 to Quebecers earning $100,000 or less annually.

Legault returned to the theme of immigration, repeating that he will demand “a strong mandate” from Quebecers to reclaim more power over immigration – particularly in the family reunification category – in the election of 3 october.

Legault took aim at recent headlines, some in international media, which have said Quebec policies — such as Bills 21 and 96 — are intolerant of minorities.

“I want to clarify that now,” Legault said. “Quebecers are a welcoming people. Quebec receives, all things considered, more immigrants than France and the United States. I will never accept that our people are accused of being closed or racist. Never.”

Later, during a press conference, Legault specified that Quebec is satisfied with the level of French of the economic immigrants that it already selects under an agreement with Ottawa.

It is the 26% of newcomers who fall into the category of family reunification – controlled by Ottawa – that Quebec wants to repatriate. This represents approximately 10,600 new arrivals per year. About half of these immigrants don’t speak French, Legault said.

Quebec welcomes about 50,000 immigrants a year. Prime Minister Justin Trudeau has repeatedly said Ottawa has no intention of ceding power to Quebec City, but Legault said he believes there is still hope of brokering a deal.

“I am convinced that we will be able to convince a federal party that could form the next government,” Legault told reporters. “Given what is happening to the federal conservatives, will there be a new federal party? Things will change. Will Mr. Trudeau still be there?

” It’s a question of survival. If we continue with a system where Ottawa selects these immigrants and only half of them speak French, in a short time we could become a Louisiana.

However, he has ruled out a possible referendum on the issue of immigration as a means of increasing his bargaining power. On Saturday, two delegates to the political convention suggested that a referendum was the only way to get Ottawa moving.

Legault also insisted that he did not overrule the Anglophone community’s votes, despite the frosty relations between Anglophones and the government following the passage of Bill 96.

“I have to explain that (Bill 96) is nothing against them,” Legault said. “It is to protect the future of French. I see and I know anglophones who are quite happy with the economic results we are delivering, so I hope they will vote for us.

He was also asked about the divisions in Quebec society when it comes to immigration and language.

“When I look at the kind of (policy) that Mr. (Donald) Trump had and Mrs. (Marine) Le Pen had in France, I think my (policy) is reasonable. French is said to be the official language of Quebec. We want to protect French.

“What they say is that if you come to Quebec, why don’t you learn French? I think that’s reasonable.

The CAQ congress, which was held under high police security, coincided with two other political rallies. The Québec solidaire MPs met this weekend in Montreal, and the Parti Québécois was in Boucherville. Both are struggling to find ground against the CAQ, which is riding a wave of support in the polls.

Sign up to receive daily news from the Montreal Gazette, a division of Postmedia Network Inc.

The next issue of Montreal Gazette Headline News will soon be in your inbox.