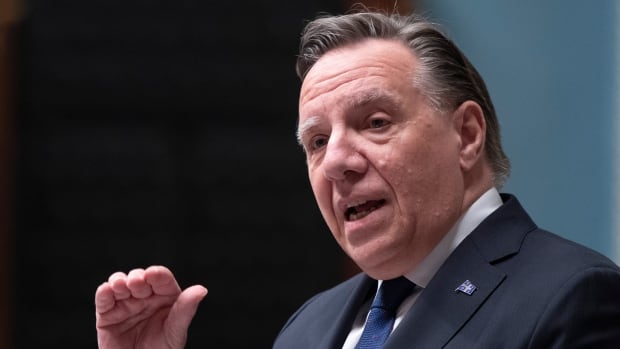 Premier Francois Legault previewed what his provincial election campaign will look like on Sunday, with a speech outlining his plan to demand that Ottawa cede more powers over immigration to Quebec.

The Coalition Avenir Québec (CAQ), Legault’s party, held its caucus in Drummondville, Que., this weekend, a town in the Eastern Townships southeast of Montreal.

Legault told the crowd of about 1,000 in attendance that he wanted to ask Quebecers for a “strong mandate” in the Oct. 3 election to be a strong negotiator with Ottawa on immigration issues.

“We changed Quebec,” he said.

Bill 21 prohibits public officials in positions of authority, including teachers, lawyers, police and judges, from wearing religious clothing or symbols. In practice, the law has mainly affected Muslim teachers who wear the headscarf.

While Quebec manages economic immigration to the province – a power that other provinces and territories in Canada do not have – the federal government is responsible for family reunification and the admission of refugees, representing nearly the half of newcomers to the province each year.

Legault said he wants Quebec to be able to choose much of that remaining half, except for refugees, so it can prioritize French-speaking foreigners. He said family reunification cases account for about 11,000 of the 50,000 people who immigrate to the province each year.

Prime Minister Justin Trudeau has so far rejected Legault’s calls for Quebec to have full control over immigration to the province, but pointed to Bill C-13 introduced by the federal Liberals, which seeks to part in increasing immigration from French-speaking countries.

Legault said it was about the survival of the French language in the province, citing the state of Louisiana as an example of a place that was once predominantly French-speaking but is no longer, surrounded by a almost monolingual English speaker. country.

“It is important that Quebecers understand that it is a question of survival”, for a French-speaking Quebec, he said.

But when asked by a reporter if there were any government studies on the impacts of family reunification and the use of French, Legault’s response was unclear.

A heavily criticized clause in Bill 96, which was passed last week, calls on refugees to learn French within six months of arriving in Quebec, after which they can no longer access most public services in a other language.

Critics say six months is not enough to master French and the clause will make it difficult for immigrants to access basic services.

On Tuesday, after the law was passed, Legault warned reporters that he wanted to pressure the federal government to hand over its immigration levers.

“That’s where the focus should be,” to protect the Frenchman, he said.

But some critics see Legault’s emphasis on legislation targeting minorities as a way to appeal to his electoral base, made up largely of older parts of Quebec’s population and those who live outside the big cities. cities.

“I doubt it’s just a French language issue,” Mostafa Henaway, a lawyer with the Center for Immigrant Workers, said in an interview last week.

Indigenous leaders across the province have also denounced the Legault government for not heeding their calls to be exempted from Bill 96, saying their sovereignty and language revitalization efforts were at stake.

On Sunday, Legault made no mention of labor shortages or health care access issues — such as emergency room capacities, waiting lists for surgeries and the shortage of doctors in family. He said he would unveil a health care plan at some point during the campaign.

Statistics Canada reported in the fall that there were 279,000 job vacancies in Quebec in 2021.

Four months before the October elections, the CAQ has already recruited candidates in more than 100 ridings, and so far half of those candidates are women. The party still has 29 candidates out of 125 to nominate.