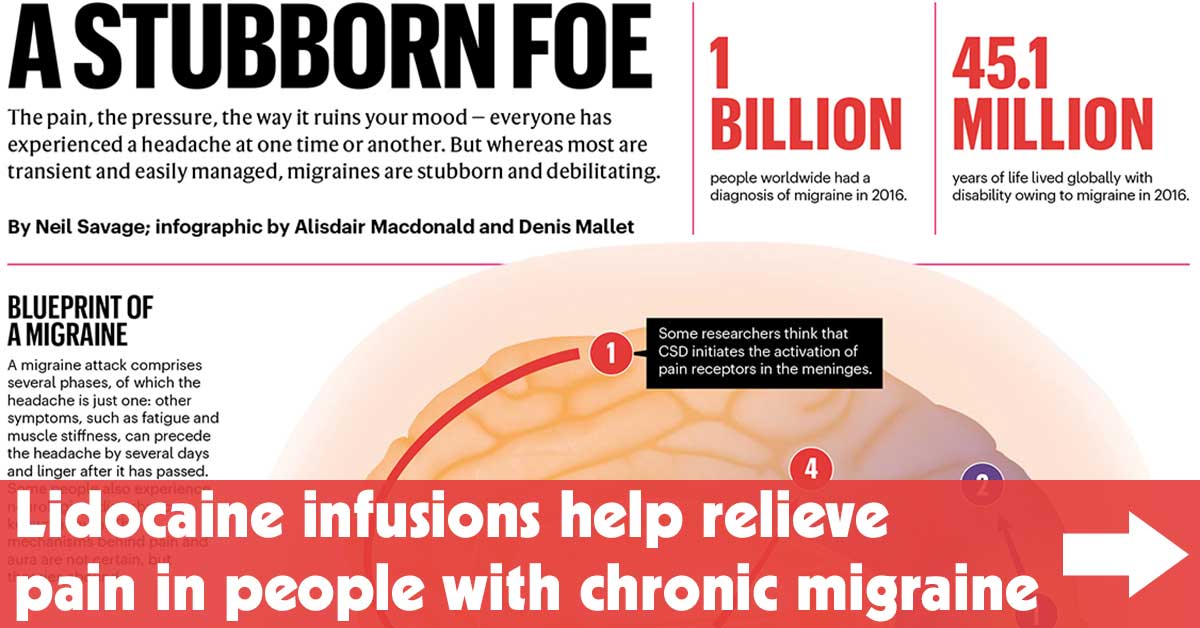 Study results reveal that lidocaine infusions may provide some pain relief for chronic migraine sufferers who do not respond to other treatment options.

The use of local anesthetics such as intravenous infused lidocaine has been proposed as a potential treatment option for people with poor quality of life following chronic migraine that is unresponsive to treatment. The goal is to “break the cycle” of pain, but little research has looked at the effectiveness of this treatment outside of immediate pain relief.

This retrospective study analyzed the hospital records of 609 people who had been admitted with insensitive chronic migraine and who had subsequently been treated with lidocaine infusions to assess the short- and medium-term benefits of this method. People included in the analysis had experienced at least 8 days per month of debilitating headaches for at least 6 months and had either failed to respond to or experienced contradictions with all 7 classes of migraine medication.

The majority of individuals experienced rapid pain relief. The average score given by the participants was 7.0 on admission and this was reduced to 1.0 on discharge from the hospital.

People attending follow-up visits about 1 month after discharge also reported fewer headache days. The 266 people who attended these visits, which took place between 25 and 65 days after discharge, noted that the number of days with headaches in the last month had dropped from an average of 26.8 at 22.5.

Although nausea and vomiting were experienced by some people throughout treatment, any negative events they experienced were mild.

As this was an observational study, the cause cannot be established and some limitations were noted by the researchers. More importantly, not all participants made follow-up visits, although they were probably people who had responded well. In addition, some people were included more than once in the analysis due to the fact that they had been admitted on more than one occasion, and although unlikely, the hospitalization itself may have contributed to the pain relief.

Continuous lidocaine infusions were linked to improvement in acute pain in most individuals and reduction in mean pain and number of headache days each month spanning 1 month. The majority of individuals were acute responders, with 43% of them sustained responders maintaining improvement at 1 month.

According to the researchers, lidocaine could be a potential treatment option for people with chronic insensitive migraine who have not had success with other treatment options.

Do you want to use our images on your site? Right click on image for embed code