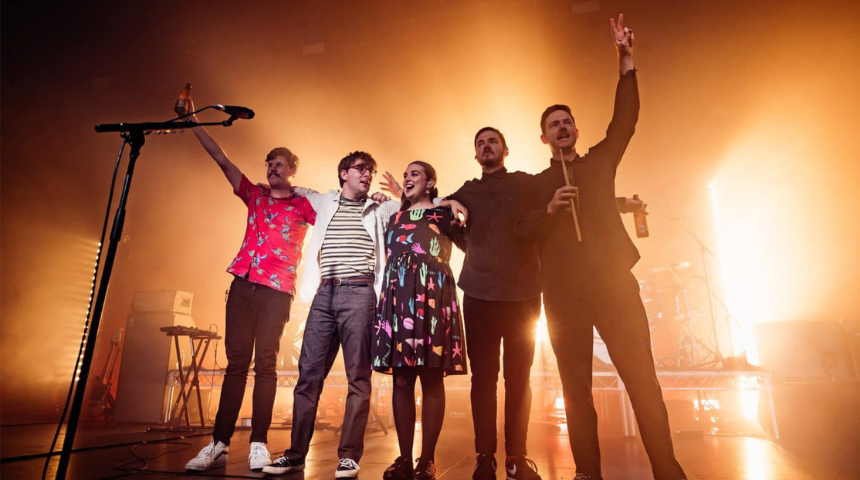 What better way to celebrate your 500th show than with 5000 of your closest friends? I’m here to tell you the answer is no, dear reader. Seven albums in and on the back of their new album More and more strange, ball park music returned to Sydney Hordern Pavilion and showed audiences how and why they rose to the top of Australia’s live music landscape.

The opening of the evening was that of Melbourne RAT!hammock. Despite the notoriously crappy Parramatta Road traffic that caused me to miss the majority of their set, what I heard was brilliant and consistent with what I’ve learned about the band over the past few years.

Then it was Adelaide teenage joans. With singer and guitarist Cahli Blakers grateful that it was Friday, her love for Katy Perry’s “TGIF” (even if it’s ironic) was the mark of a tidy, but sometimes loose ensemble. Opening with “Ice Cream” before moving on to “Terrible,” the duo’s banter between tracks helped their 30-minute set flow organically. Closing out unreleased tracks “Super Glue”, “Wine”, “Three Leaf Clover” and “Something About Being Sixteen”, Teenage Joans certainly won a few more fans during their set.

Northern Territory legends played the main supporting role for the night King Stingray. With songs sung in their native native language as well as English, the five pieces got the crowd moving and only underscored why nearly everyone has high hopes for the band. With a set filled with all their greatest songs, from “Camp Dog” to “Get Me Out” and brand new track “Let’s Go”, recording their greatest song for the end in “Milkumana” was a masterstroke. from the group and left only the foam dogs on the front wanting more.

As Australia’s loveliest band, Ball Park Music set the tone for what bands can do to engage music fans across the country. Their interactions with audiences online and in person are always healthy and make it easier to see and hear how the band has managed to develop such a strong and loyal fanbase over their career. Playing an all-ages show meant that many in the crowd were still teenagers (and younger) attending with parents and friends perhaps to see their first live show.

And, honestly, if I could go back 15 years to my first show, I would have hoped it might be by Ball Park Music. Every time I’ve seen the band live, they’ve delivered, from cover songs to deep album tracks to when they gong toured across the country and asked the crowd each night to sing. ‘they’ wanted to see us hit that gong? (no surprises, but it was a huge result for everyone involved when the gong was struck).

You knew the crowd was about to see a scorching set when the preset soundtrack ended on John Williamson’s “Home Among the Gumtrees,” and BPM failed to deliver the goods. Kicking off the set with the recent single “Manny”, the night quickly turned into Good mood“The End Times” before going even further back in the BPM timeline to 2014 Puddinghead and the always pleasant “Everything is shit except my friendship with you”. Right away, you could see the band’s growth over the years as their stage presence and light show climbed the quality ladder.

Not having really been able to shoot their eponymous album and More and more strange albums so far, naturally a lot of the set was biased towards songs from those two albums. In addition to “Manny,” “Weirder & Weirder,” everyone’s favorite ode to sunscreen “Sunscreen,” “The Present Moment,” and the nostalgic “Stars In My Eyes” all made appearances from More and more strangewhile the tumultuous “Spark Up!”, A stripped down version of “Cherub”, “I Feel Nothing” and the main set approach “Head Like a Sieve” (with the leader Sam Cromack dedicating the song three times to “anyone who has trouble remembering things” – classic dad joke) all had a run from the eponymous.

While it’s great to hear how the new material played out live, it was obviously the old fan favorites that got the best response from the crowd. The loving “Exactly How You Are” and band-stopping “It’s Nice to be Alive” were highlights for everyone involved, while the more upbeat and exotic “Pariah” (featuring drum solos and extended keyboard beats), “Trippin’ the Light Fanstastic” and “She Only Loves When I’m There” really got the crowd’s blood pumping on a colder winter’s night.

With all of that in mind, the highlight of the evening was probably the stripped-back “The Perfect Life Doesn’t Exist”, delivered solo and acoustically by the utterly terrified guitarist. Dean Hansen. As a song I never really gravitated toward when it was released, seeing it end and being revised really hit me hard and honestly, I wouldn’t have wanted it any other way.

Closing out the night on longtime fan favorite “Sad Rude Future Dude,” you realized that everything this band does is done wholeheartedly, with full hearts and the best of intentions. Sure, they didn’t raise the big gong the first time I saw them, but that didn’t matter. A band playing their 500th show might have done the night on their own, but Ball Park Music made the show on the fans. And for that alone, it says a lot about their character, their longevity and how good they are.

FIVE STARS (OUT OF FIVE)

Get tickets to other Ball Park Music shows HERE

More to explore on the AU: