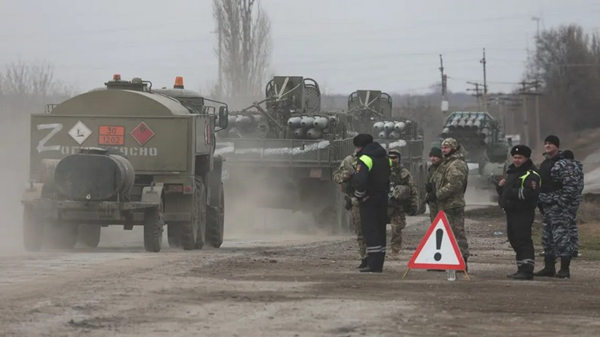 Russian Ambassador to the British capital, London, Andrei Kelin, has ruled out the use of nuclear weapons by his country’s army in its military operation in Ukraine. In an interview with the BBC yesterday, Keelen said that Russian military rules stipulate the use of such weapons only if the Russian presence is threatened, and “this situation has nothing to do with the ‘operation in progress”.
The ambassador answered no to a question asking whether he believed Russian President Vladimir Putin would be ready in the event of an expanded military operation to launch a nuclear attack on Britain.
The Russian ambassador denied his country’s responsibility for any war crimes and said of reports of atrocities in the kyiv suburb of Bucha after the Russian army withdrew last April: “Nothing happened, and there are no bodies on the streets, and from our point of view, it’s a fabrication that’s going on.” using it to hinder the negotiations.
Kelin explained that the last time he visited Ukraine was a few years ago, during the Maidan revolution.
Regarding the footage of the destruction in the Ukrainian port of Mariupol, Kilin said that this destruction occurred during battles in the city, but said that Russia could not be held solely responsible for it, adding that “damage collaterals” during battles were possible.
During the interview, the Russian ambassador repeatedly accused Ukraine of killing civilians in the Donbass region, and said that his country justified its own military operation by wanting to liberate Ukraine from the Nazis.