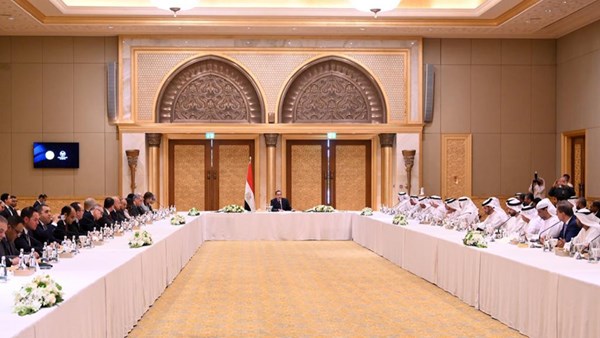 Egyptian Prime Minister Dr. Mostafa Madbouly affirmed his country’s interest in the presence of Emirati companies in Egypt in all areas, whether by attracting new companies, or through the expansion of companies currently operating in the country. Egyptian market.
Madbouly said during his meeting in Abu Dhabi yesterday with the Emirates Council for Overseas Investors, with the participation of a number of CEOs of Emirati companies investing in Egypt, that the industrial sector is a priority. absolute in Egypt, emphasizing the willingness to cooperate with the UAE in the development of an integrated strategy between the UAE, Egypt and Jordan In the industrial sector, with the aim of creating strategic cooperation and bases industries between the three countries.
Madbouly stressed that the crises the world has witnessed over the past two years, whether due to the “Covid-19” pandemic or the Russian-Ukrainian war, underline the need for cooperation between the brotherly Arab countries to achieve the sufficiency of basic needs.

investment promotion
Madbouly said: The Egyptian state is completely open with all its institutions to encourage investments from brotherly Emiratis, and our ambition is great to partner with brotherly Emirates.
He explained that the industry occupies an advanced position in the priorities of the Egyptian government, particularly in the field of food industries, mechanical industries, medicine and medical preparations, renewable energies and others, highlighting the existence of successful experiences regarding Emirati investments in Egypt in several areas, such as real estate development.
He pointed out that the agricultural sector has also witnessed remarkable developments in recent years, stressing the importance of Emirati investments in Egypt in this sector, in particular from companies of Al Dahra, Al Canal Sugar and others, explaining that the Current government leadership is focused on providing infrastructure in promising areas such as Toshka, East Oweinat, West Minya, New Delta and Sinai.

Attendees
The meeting was attended by members of the official Egyptian delegation, HE Dr. Mohamed Shaker, Minister of Electricity and Renewable Energy, HE Dr. Hala Al-Saeed, Minister of Planning and Economic Development, HE El-Sayed Al-Qusair, Minister of Agriculture and Land Reclamation, HE Nevin Gamea, Minister of Trade and Industry, and Dr. Tamer Essam, Chairman of the Al-Dawaa Authority Board, Ambassador of Egypt, Sherif El-Badawi, Ambassador of the Arab Republic of Egypt to the country, Counselor Mohamed Abdel-Wahab, CEO of the General Authority for Investment and Free Zones, and Engineer Mohamed El- Sewedy, Chairman of the Board of the Federation of Egyptian Industries.
The Emirati side included Jamal bin Saif Al Jarwan, Secretary General of the Emirates Council for Overseas Investors, Maryam Khalifa Al Kaabi, the country’s Ambassador to the Arab Republic of Egypt, officials from a number of ministries and governmental and private institutions, and about 30 businessmen in several sectors.

The private sector
Madbouly explained that the conditions Egypt has been experiencing in recent years required prompt action, through the implementation of numerous strategic and infrastructure projects. With the aim of creating an attractive climate for investment and then increasing the contribution of the private sector after providing a fertile environment for investment. He said the economic reform measures that were approved at the end of 2016 have played an important role in supporting the stability and stability of the Egyptian economy and in building trust and confidence. insurance for investors, explaining that the current period is a new stage in the Egyptian economy. the path of the economy by opening up to the private sector and setting up giant projects in partnership with the sector. Madbouly explained that the Egyptian government aims to increase the share of the private sector in total investments from the current 30% to 65% within 5 years, explaining that the government intends to offer a large number of public assets of good quality to the private sector, to acquire shares of them, which contributes to pumping out investments estimated at 40 billion dollars over 4 years, or an annual average of 10 billion dollars.

industrial land
Madbouly said that the government is also facilitating investment procedures, whether attracting new investments or increasing existing investments, as significant measures have been approved in the sectors of industry, agriculture, communications and renewable energies.
He pointed out that the government has made it clear that the allocation of industrial land will be through the right of usufruct for a long period or the ownership of the land according to the cost of public services, explaining that in a few days the value of all industrial land in Egypt will be advertised in all geographies, with payment facilities granted to those who wish to become owners, as the government does not aim to profit from the sale of industrial land but to operate the factories.
He added that these factories will get the “golden license”, which will be issued by the Council of Ministers and the Industrial Development Authority, as it confirms that the investor is not obliged to obtain approvals from other parties. , and it will be delivered within 20 days.
Madbouly pointed out that the Egyptian government has launched a set of additional incentives for specific industries in specific geographical areas, such as green hydrogen and ammonia industries, and in promising areas such as El Alamein. and the administrative capital.
He explained that within the framework of facilitating business practices and removing bureaucracy, the Sovereign Wealth Fund of Egypt was recently created, with the aim of providing more flexibility and speeding up the stages of work with other sovereign wealth funds, or with investors working in large strategic projects. .

Exchange rate
In response to investors’ questions regarding the stability of the exchange rate in Egypt, Madbouly explained that during a specific stage, major investments were expanded and a large percentage depended on the entry of foreigners into the local bond market, but with the conditions of the recent global crisis, a large part of these investments have been abandoned, Stressing that there are no more risks in Egypt because of the presence of these funds again, because they rely on sustainable resources, the main ones being industry, exports, the Suez Canal, remittances from Egyptians abroad and tourism.
He added: Our approach in the next stage is to rely on foreign direct investment, with an interest in increasing industry revenues and exports.
He explained that Egyptian exports increased by more than 20% last year, in addition to reaching a 20% increase in the first three months of this year.