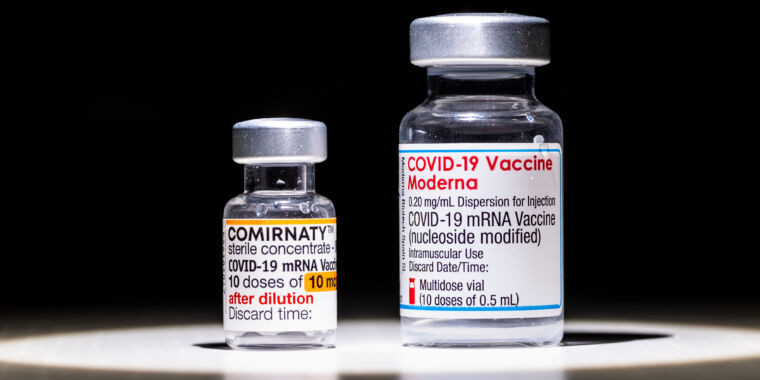 People aged 60 and over who were initially vaccinated with two doses of the Pfizer-BioNTech COVID-19 vaccine were better protected against the omicron coronavirus variant after being boosted with a Moderna vaccine rather than another dose of the Pfizer vaccine -BioNTech.

These findings are based on interim data from a small randomized controlled clinical trial in Singapore and published this week in the journal Clinical Infectious Diseases.

The study, involving 98 healthy adults, cannot determine whether the Moderna booster is simply superior to a Pfizer-BioNTech booster for older adults or if a mixed booster strategy is inherently better. It also focused only on antibody levels, which may or may not translate to meaningful differences in infection rates and other clinical differences. It also only followed people for 28 days after a booster, so it’s unclear if the benefit of the Moderna booster will hold up over time.

Yet the authors of the study, led by Barnaby Young of the National Center for Infectious Diseases in Singapore, report that the beneficial effect observed from switching from Pfizer-BioNTech to Moderna was large enough that they did not expect to what it disappears with more participants. This also follows other studies which have suggested that mixed reinforcement – ​​i.e. heterologous reinforcement – ​​can generate slightly different antibodies and reduce the incidence of SARS-CoV-2 infections in people aged 60 and over.

For the new study, Young and his colleagues looked at antibody levels in adults of all ages who had received two doses of the Pfizer-BioNTech COVID-19 vaccine between six and nine months before receiving a booster dose. The researchers excluded people from the trial if they had a weakened immune system or had evidence of previous SARS-CoV-2 infections (the presence of anti-N antibodies).

Of the 98 participants, 50 then received another dose of the Pfizer-BioNTech vaccine for their booster (homologous booster), while the other 48 received a Moderna booster (heterologous booster). The authors examined their resulting antibody responses on the day of their recall, seven days later, and 28 days later. Specifically, they compared total antibody levels targeting a key part of the SARS-CoV-2 spike protein, called the receptor binding domain. They also looked at levels of neutralizing antibodies against a range of specific variants of SARS-CoV-2, from ancestral strain to alpha, beta, delta and omicron.

Overall, the boosted heterologous group had slightly higher total antibody levels than the homologous group – approximately 40% higher on day seven and 30% higher on day 28, although confidence intervals overlapped. But, when the authors split the groups by age, they found that the benefit came entirely from differences in the 60-plus group. Antibody levels were equivalent in younger participants regardless of booster type.

Older heterologous participants also had higher levels of neutralizing antibodies against all SARS-CoV-2 variants tested, with the greatest difference seen against omicron, which is known to antagonize vaccine-derived immune responses. At seven days, the level of neutralizing antibody inhibition was 89% in the heterologous-boosted group compared to 64% in the homologous-boosted group. At 28 days, spread was 84% ​​in the boosted heterologous group to 73% in the boosted homologous group.

Overall, Young and co-authors concluded, “For the vulnerable age group in particular, a heterologous COVID-19 booster vaccination regimen induces a higher anti-spike antibody titer and a response of stronger neutralizing antibody against the highly infectious variant of Omicron (~20 percent higher neutralization) than a homologous boosting regimen.”

The trial is still ongoing, so the authors will continue to add participants and data. They plan to reassess antibody responses in all participants at six months and 12 months after the booster. They will add people who initially received Moderna vaccines to the study to see if switching to the Pfizer-BioNTech vaccine for the booster provides a similar benefit.