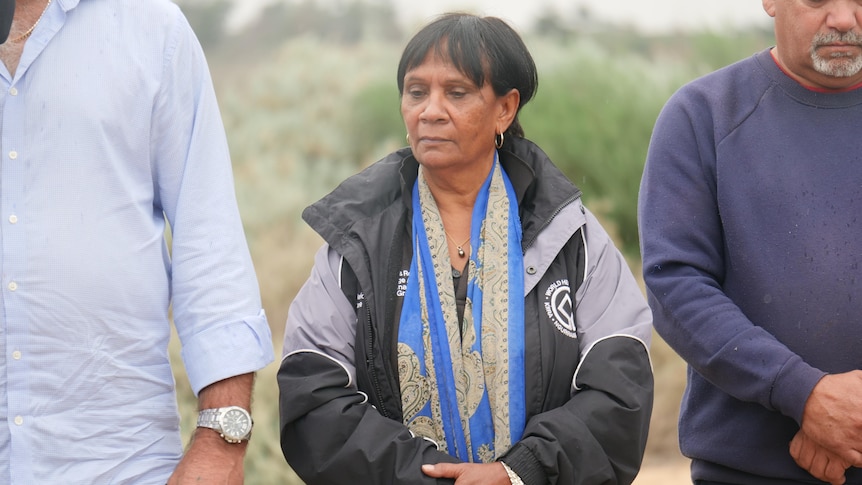 The remains of Mungo Man and 107 other Indigenous people who lived up to 42,000 years ago will be reburied in 26 unknown locations in western NSW, amid “anger” from some local elders they were not consulted.

Federal Environment Minister Sussan Ley made the announcement today at the Mungo National Park, where Mungo Man is stored after being returned to country in 2017.

His remains, which were the oldest evidence of humans living in Australia until a 65,000-year-old site was discovered in the Northern Territory in 2017, were removed in 1974 without the permission of traditional owners and were taken to the National Museum of Australia.

The decision to rebury them follows additional consultation initiated by Ms Ley after Heritage NSW recommended the reburial of Mungo Man, Mungo Lady and the other individuals discovered at Lake Mungo and Willandra Lakes between 1960 and 1980.

“The decision that I’ve made is absolutely the right one,” Ms Ley said.

“That’s what respected Indigenous traditional culture and that’s what we as a nation must do.”

The decision has been supported by the Aboriginal Advisory Group (AAG), which Ms Ley said consisted of “effectively elected members from three tribal groups”.

The Willandra Lakes Regional World Heritage Area AAG decided in 2018 that they wanted the reburial, and today chairwoman and Mutthi Mutthi elder Patsy Winch said the government had listened to her people.

“We have tears of joy and tears of sorrow over this decision,” she said.

“It’s been a long, hard battle to get here that we thought we were going to lose but we didn’t. Now we can all move on to the next stage.”

But many local Indigenous people have told the ABC they were excluded from the process.

According to the National Native Title Tribunal, the majority of Lake Mungo falls within the Paakantyi people’s land, and parts are recognized as Mutthi Mutthi and Ngiyampaa land.

“I am so angry, and we need it to stop,” Paakantyi elder Jennifer Jones said.

“Mungo Man cannot be buried unless all the traditional owners make that decision.”

Ms Jones said she had been writing to Ms Ley on the topic for years, but her tribe had been left out of the discussion despite being the traditional owners.

“I will continue to fight for Mungo until the day I die,” she said.

Paakantyi man Michael Young said the story of Mungo Man was deeply significant, and he wanted the remains to be somewhere “that we could connect people through scholarships, bringing archaeologists out, scientists out and through the universities”.

“For them to just bore hole and drop remains down a hole … there’s nothing ceremonial about that. That’s a sad end of Mungo.”

While the Paakantyi people are the main native title holders in Mungo National Park, parts of the area are recognized as Mutthi Mutthi and Ngiyampaa land.

Mutthi Mutthi man Jason Kelly grew up in nearby Balranald and is a former Willandra Lakes park ranger.

He said a “keeping place” where people could pay their respects and honor Mungo Man in a culturally appropriate way would be in line with the wishes of many past and present Mutthi Mutthi elders.

“[Sussan Ley] had promised that when COVID lifted that she would come out and meet with us and obviously she’s meeting with the AAG and nobody else,” he said.

“My mind boggles that the Minister hasn’t come to speak to us at all. I’m really shocked and disappointed.”

Ms Ley said she had engaged a national consultation process and there was “overwhelming agreement”.

“The right decision was the easiest decision,” she said.

Patsy Winch said four of her sisters had died in the time the process had been underway.

“I’m happy that I’m still here and that it’s not going to drag on for another 40 years, that this burial is going to happen very shortly,” she said.

“I am thankful these ancestral remains will finally be laid to rest the traditional way in country.”

NSW Environment Minister James Griffin said the project had been subject to extensive community consultation and when he met with Indigenous people last month, “they seemed quite happy with how consultation had taken place”.

He acknowledged the length of time that had passed but said it had been difficult for respective governments to determine how the reburial would take place, due to the national park’s listing as a UNESCO World Heritage site.

“I can’t imagine the grievance they’ve experienced in this process, especially considering some of the elders who fought for the return of these remains are no longer with us,” he said.

“It’s time to let their spirits rest in peace.

“I hope it provides some comfort for the Barkindji/Paakantji, Mutthi Mutthi and Ngiyampaa people.”

The 108 remains are set to be reburied across the national park in the coming months.

Ms Ley said she had added three conditions in an attempt to safeguard the remains.

The location will be only be known by select people in the AAG.